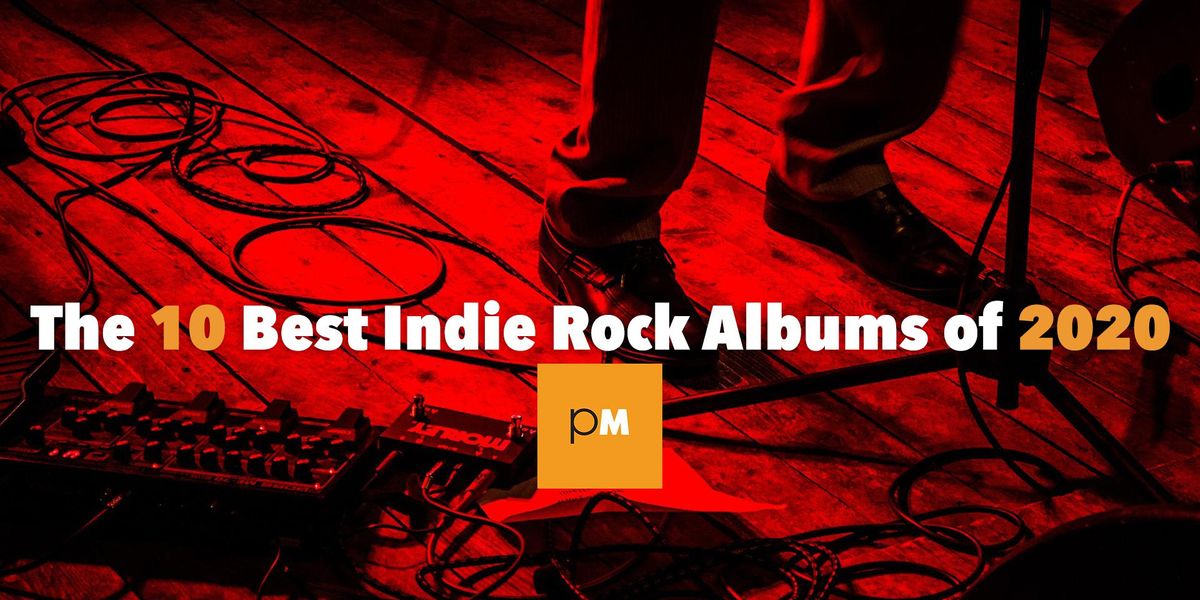 Fake It Flowers, the debut from the British singer-songwriter Bea Kristi, is such an earnest homage to the 1990s that it’s hard to find fault with it. To say the album is derivative is to miss the point. You know that imitation really is the sincerest form of flattery from someone who named one of her early songs “I Wish I Was Stephen Malkmus” (from the 2019 EP, Space Cadet) and told the NME in an interview, “I want to live in the ’90s.” Fake It Flowers is full of grungey guitars and lovesick lyrics (sung in Kristi’s syrupy vocals) that call to mind L7, Hole, the Breeders, Elastica, and all of the above. Lead single “Care” is loud, pretty, and catchy and seems destined to soundtrack a cool romcom. As someone who grew up in the late ’90s, consuming a heavy dose of MTV, Fake It Flowers’ unabashed love of a forgotten and oft-maligned era makes me smile. – Linnete Manrique

1980s nostalgia seems to be an ever-present fixture in the indie rock scene. From new wave to goth to post-punk, the past’s sounds continue to influence countless modern indie rock bands. The Brooklyn-based quartet Hypoluxo mine their sound from the post-punk era but are more punk than post-punk, never taking themselves too seriously in their third self-titled album. At an economical 27 minutes, Hypoluxo speed through ten tracks with frantic energy and a whole lot of tongue-in-cheek humor.

Accompanied by jittery guitars and propulsive drums, lead singer Samuel Cogen sings and snarls with a manic intensity that never lets up, whether he’s tearing a new one to meteorologists for their inconsistent weather reports in “Nimbus” (“You can never trust / You can never trust / What they say”), or chronicling their fallout with their previous record label that almost killed the band in “Ridden” (I, I feel, I feel I’m stronger than that / I, I feel, I feel I’m better than that”). Hypoluxo doesn’t redefine the genre. It’s just a fun record that makes you want to shake your head and play some air guitar and drums. And sometimes, that’s all you need. – Linnete Manrique

Like more than one legendary American songwriter before her, [Phoebe] Bridgers is documenting the present in its vernacular. For 2020, that means the language of the scattershot — snapshots and sound bites, quick bursts, and clickbait.

I won’t be surprised if Punisher‘s final track, “I Know the End”, is used as a primary source for what it was like to witness 2020. The track details a dystopian America that’s eerily recognizable. “Windows down, scream along / To some ‘America First’ rap-country song,” she sings. “A slaughterhouse, an outlet mall / Slot machines, fear of God…” But Bridgers isn’t concerned: “No, I’m not afraid to disappear / The billboard said, ‘The End Is Near’ / I turned around, there was nothing there / Yeah, I guess the end is here.”

It’s a shrug that morphs into an anthem, as group vocals take that final line to the album’s end. It’s not hard to imagine arenas singing those lines at a deafening volume under different circumstances. And in those closing moments, Bridgers encapsulates everything that’s so successful on Punisher. Other writers might look to the past or towards the future to make sense of the disturbing present, but Bridgers is determined to embrace the moment on its own terms. It may sound bleak and illogical, but at least it’s honest. – Kevin Kearney

One of Women in Music Pt. III‘s standout strengths is its discussion of mental health and illness, reflected best on “I’ve Been Down”, a somewhat sequel to “Now I’m In It”, as both explore Danielle’s experiences with depression. “You say there’s no stupid questions / Only stupid people / Well I’ve been feeling pretty foolish / Trying to get myself through this / And I’ve been watching too much TV / Looking up at the ceiling / It’s been making me feel creepy / I’m just trying to shake this feeling.” Even in our current era, which likes to pride itself on being more open to discussing mental health issues and eliminating the stigma therein, there is a lot of work to be done. So music that openly discusses depression is still nothing short of revolutionary.

With Women in Music Pt. III, HAIM have learned the power of turning inward and inviting others on the journey to self-discovery. As pop singer Marina Diamandis once said, “Don’t trust a perfect person and don’t trust a song that’s flawless.” Our flaws are what make us more experienced, relatable individuals, so by learning to embrace the power in their weakest points, HAIM have created their best work to date. – Jeffrey Davies

Bartees Strange (the moniker of Washington DC-based musician Bartees Cox Jr.) gained instant critical acclaim with his debut EP, Say Goodbye to Pretty Boy, where he reimagined various songs of the National and was inspired by his experience of being a Black artist in a largely white indie rock scene. As Bartees said in an interview with Rolling Stone, “A big part of why I make music is so that people who look like me can feel like they can do it, too.”

His first LP, Live Forever, is an energetic and genre-hopping album that blends folk, indie rock, rap, gospel, and dance-punk to showcase the frustration of being pigeonholed and being denied the space to belong and be seen. In “Mossblerd” – a minimalist hip-hop track that wouldn’t feel out of place in the Brainfeeder catalogue – Bartees sharply notes, “Genres keep us in our boxes / Keep us from our commas / Keep us n****s hopeless / Keep us from our options.” In addition to its evocative lyrics, one of the more notable aspects of Live Forever is Bartees’s incredible vocal range. He croons, wails, howls, and sing-speaks with passion and moving vulnerability.

From the rocking “Mustang”, to the anthemic “Boomer”, to the infectious “Flagey God”, to the delicate “Far”, Live Forever is a self-assured debut that sounds like an amalgamation of its influences (Bon Iver, the National, TV on the Radio) at the same time that it is a wholly original, unique and exciting addition to the indie rock scene. – Linnete Manrique

5. Nothing – The Great Dismal [Relapse]

The temptation with a band like Nothing is to describe their music by rattling off a list of whom it sounds like. Indeed, with a few changes in tempo and effects pedals, most of the ten songs on The Great Dismal could have been performed by most of the excellent, loud guitar-based alternative bands of the 1990s. That’s not a knock; it is a testament to the quality and confidence of [frontman Domenic] Palermo’s songwriting and artistic vision.

The guitar-only opener “A Fabricated Life” is super-pretty, but more doomy than romantic, as Palermo observes a society who “sing the same songs / Beat the same old tired drums.” The uptempo, drum machine-driven clatter of the single “Say Less” is probably the first Nothing song that could credibly be described as “danceable.” Any danger of The Great Dismal getting lost in its nihilistic black hole is put off by the melodious, almost sweet power-pop of “Catch a Fade” and the surging, hand-in-the-air rush of the magnificent “Famine Asylum”. Overall, The Great Dismal is Nothing’s sharpest, most concise, and most consistent album to date. – John Bergstrom

Inspired by the sounds and sentiment of the synthpop classics, OMD’s “Electricity” and LCD Soundsystem’s “All My Friends”, songwriter Ian Devaney formed Nation of Language in 2016 after his rock band Static Jacks hit a brick wall. Mining the 1980s as much as the 2000s for inspiration, Nation of Language’s Introduction, Presence is a remarkably confident and fully formed debut album. Singing in a forlorn baritone that calls to mind Matt Berninger (The National) or Paul Banks (Interpol), Devaney laments the passage of time, reminisces of romantic failures and feels crushed by the weight of expectations (“I’m wasting away / I took the long road home / And it never paid off for me,” he croons in the opening track, “Tournament”), the monotony of life and a general existential dread (“I say, how can people find what I can never find?” he ponders in the euphoric “Rush & Fever”). But despite its gloomy lyrics, Introduction, Presence is a fun, danceable and cathartic record. With its shimmering synths, pulsing basslines and melodic guitars, Nation of Language has created a record that makes ’80s nostalgia feel essential. – Linnete Manrique

The vulnerability of struggling to know yourself and others is a key theme throughout (the Mercury Prize-nominated) Every Bad. But more than just a piece of “sadcore sadfishing”, this album feels much more like a concept album. Each song is a three-minute chapter building a rich and alluring character profile. There is a gravity to each of these 11 songs. While you listen and piece together the profile of the lost misanthrope and their various ills, you cannot help but be drawn in. You want to know the narrator of each song; you want to befriend and know them. They are damaged, but they are desirable. Like a siren, they call you to the rocks, forcing you to acknowledge your destructive insatiable desire. Every Bad is fragile and robust, confidently flawed, and above all evidence that Porridge Radio is in their ascendancy. They are a real force to be reckoned with. – B. Sassons

Tame Impala’s The Slow Rush is as much a self-reflective open letter to the world as it is a beautifully obfuscating, transmuting, rippling piece of music. On the 12-track album, the band’s fourth, Kevin Parker reminisces, offers notes on where he’s come from, where he’s been, and what the future might hold for his psyche, all amidst Tame Impala’s signature dreamy, 1960s-retro-through-a-million-pedals sound.

You know it’s the band the instant the music begins, and yet the album feels both new and necessary. The record is the mark of rare talent, and yet also someone who lives in both doubt and curiosity amidst his talent and success. The record is unique, and it’s also connected to very American and British musical lineages, from Grandmaster Flash to Kanye West to the Beatles. The Slow Rush is an investigation into how to survive, even when there’s so much abundance around and it should otherwise be so easy. – Jacob Uitti

When Emily Nussbaum’s superlative profile of Fiona Apple appeared in The New Yorker in March of 2020, a lot of attention was centered on a downright shocking line, included in the song “For Her” off Apple’s fifth full-length, Fetch the Bolt Cutters. “Well, good morning / Good morning / You raped me in the same bed your daughter was born in.” On record, the lyric is nearly screamed, Apple’s voice sizzling with rare, powerful fury.

It’s a startling thing to hear, especially in the context of a song that begins as a multi-tracked cheerleader routine, all rapid rhyming words and clapping percussion. We hear a tale of a woman upset with her partner’s behavior, noting that “Maybe she got tired of watching him / Sniff white off a starlet’s breast”, heavily implying this is a man in the media and one who has gotten away with far worse for far, far too long. This is not Apple’s tale to tell, but that of another woman who has suffered and may continue to suffer under the shadow of a tasteless, feckless partner.

What makes Fetch the Bolt Cutters such an extraordinary, surprising, and downright essential record is how it isn’t about Apple so much as it’s about other women: their friendships, their hangups, and the relationships they end up trapped in, mixed with Apple’s pathos and gravity. It is a thundering, angry, and pointed album that feels liberated by the fact that the target of her wit and barbs isn’t mainly herself or her lingering insecurities, no. This time around, she sets aim at the men who have never had to face any consequences for their actions — and then proceeds to go for the jugular. – Evan Sawdey