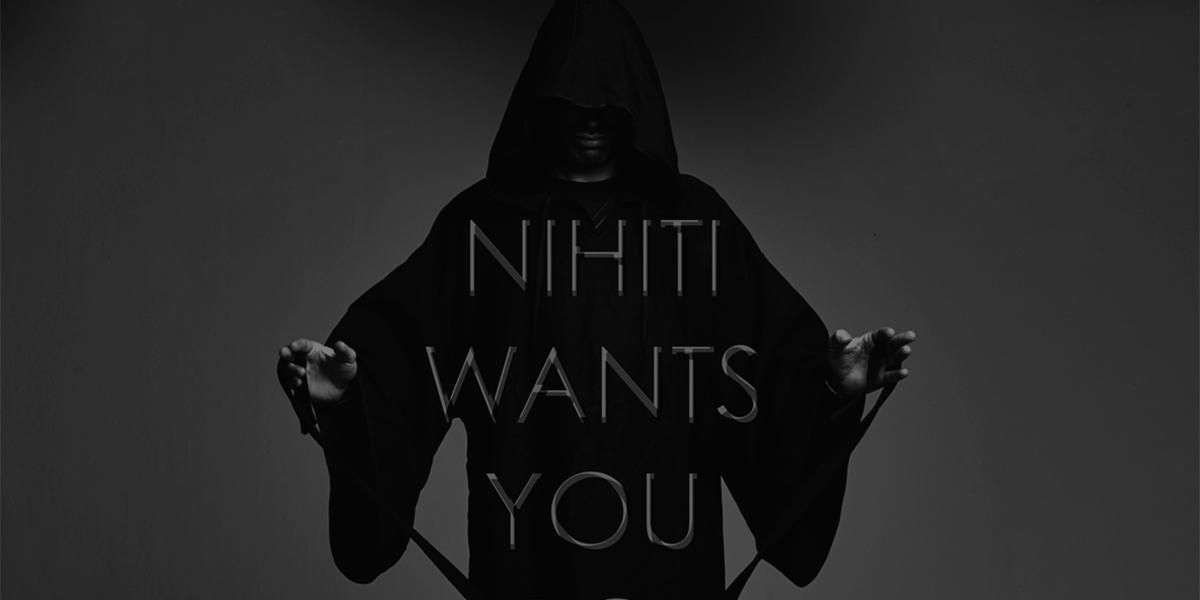 The night is coming down across most of the western world, cold winds rising while rolling waves of COVID lockdown seem inevitable. NIHITI’s new album provides an enthralling maximalist/minimalist backdrop to the faltering of the world’s energies. I’ve spent past months fearing lunkheaded musical responses to COVID but was delighted to find Greg Fox (drummer) and Viktor Timofeev (guitar) creating something that rides every emotional wave from tranquillity to horror, something simultaneously quiet yet loaded with complex detail. This ambiguity and interpretive breadth fit the world right now where no action or moment feels uncomplicated.

While Fox is known primarily for his decade-long stint as a drummer with Liturgy, Latvian-born Timofeev has an extensive track record as a visual artist across a range of mediums. It’s fascinating contrasting Fox’s drumming in Liturgy, where his work was persistently exuberant and complex, with the restraint exhibited on something like “In the Sand” or the complete absence of percussion elsewhere here. It’s similarly possible to scour Timofeev’s work and see the way Skeleton of the Wind combines minimalist sculpture alongside juxtaposed visuals, or the combination of poetry and ordered space in If I Could Go to Sleep for Days, Would You Count the Hours? (SAZARUS IV), and to see the same unwillingness to be just one thing or another in NIHITI.

For example, on “A New Kind of Weather” or “In the Sand”, the album embraces echoing post-rock songcraft. But then on “Shudder Into Silence” or “The Practice of Injury”, this is an album of chilly instrumental electronica. But it also finds space to remodel a Roy Orbison song made famous by Cyndi Lauper (who drove it into the Top 10, a feat repeated by Celine Dion). The cover of “I Drove All Night” is truly exquisite; you can almost see cold breath hanging in the winter air. The bass gusts and billows around a naked vocal that sounds like a wide-eyed exhausted pillow talk beside a wide-open window. It’s in keeping with the vocals across the album where relatively narrow range and low pace, just one step above talking, are used to their fullest extent.

Opener and title track “A New Kind of Weather” is magnificent, a fair demonstration of the duo’s ability to find several vistas within a single track. It ranges widely, starting in breathy darkness (reminding me of the awesome Splinterskin) playing out over the wail of distant ambulance sirens on artificially still streets; shifts to doppler effect guitar atop a pile-up of drum battery; then onward to husky chunks of breathing before a watery post-rock outro that stretches and decays. “Asking you if you will fall to the ambulance’s siren song” is one of many chilly lines of entirely appropriate paranoia. A radio edit tagged on at the end comes in a minute-and-a-half shorter, seemingly retaining the entire first three minutes at the expense of some of the appealing instrumental drift toward the rear. It’s nice to hear the track again merely because of its power, but ultimately it distracts and adds nothing to this record’s concision.

The album continues with “Shudder Into Silence” which is reminiscent of the first moments of “The Downward Spiral (The Bottom)”, Coil’s remix of the Nine Inch Nails song (link) in its merging of a liquid backdrop drowning muttered lines and disrupted by electric jolts of a synthesizer. Long fluctuations play out until eventually the song becomes caught up in the shriek of muted air-raid-sirens that are themselves replaced by surging high notes falling back down into a shimmering pool.

“In the Sand” is a fetching song, almost warm, except for lyrics like “…to the precipice of death, stumbling right over the edge…” What’s wonderful is that the delivery is so carefully understated that there’s nothing ostentatious about what could have been goth posturing; it’s all delivered with honesty and simmering passion. “The Practice of Injury” meanwhile hovers in a space between cyborg vocal chant and religious apocalypse. What could be a full-voiced cathedral choir, organ and bells, is reduced to a compressed hum gently eased up in volume then allowed to throb and pulse, revolving in place until defaced with shuffles and spurts. For a brief moment, there’s the potential of escape. The sound presses up toward the heavens but is dragged back down far short of catharsis.

Even at only five tracks long (plus the radio edit), A New Kind of Weather never feels stunted. A single mood is sustained across the album, giving a sustained tension. I found myself shallow breathing because I didn’t want to interrupt something that felt so intimate. Similarly, there’s not a song here that is not intricate and truly beautiful. Maybe, with a storm rolling in outside, NIHITI caught me at the right moment because I felt delighted to live inside this twilight emotional shading over and over for many hours, and I know I want more.