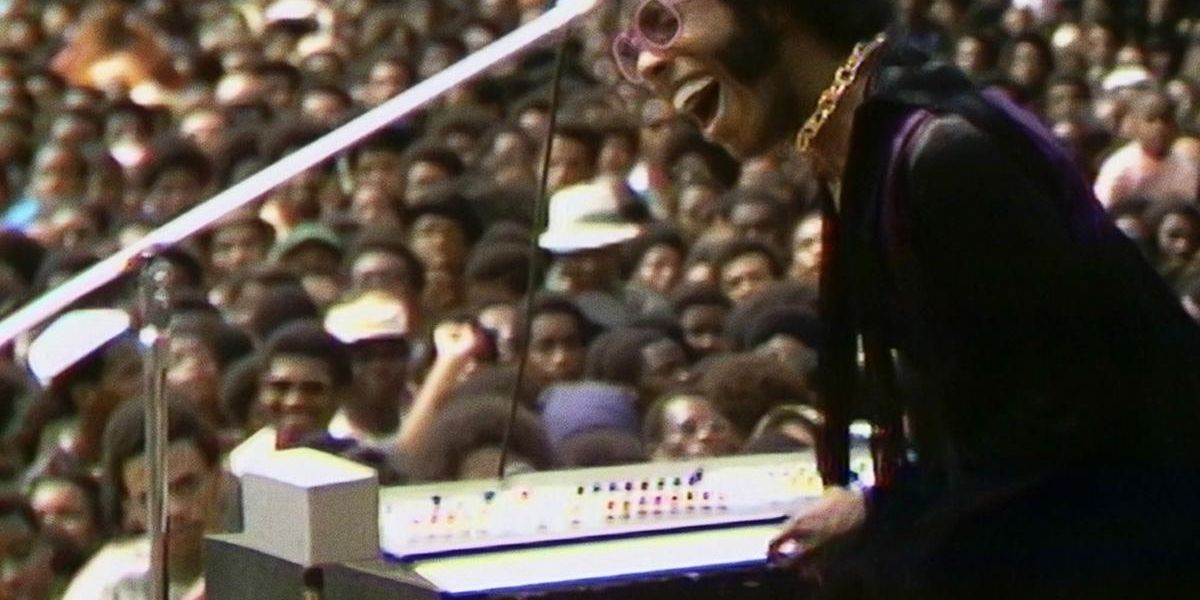 Given the way documentaries by and about celebrities are so often treated as a dumping ground for famous, inexperienced debutantes to get their first taste of filmmaking control behind the camera, you’d be forgiven for worrying that the directorial debut of the Roots’ Ahmir “Questlove” Thompson about the 1969 Harlem Cultural Festival might be a glossy, star-studded retrospective that’s as much a tribute to ’60s Black revolutionary culture as an excuse to parade the director’s big-name friends in front of the camera.

But a couple of minutes into Summer of Soul (…Or, When the Revolution Could Not Be Televised), a 19-year-old Stevie Wonder starts a rain-soaked drum solo in front of an enraptured crowd at Harlem’s Mount Morris Park, and you can’t help but think, “How bad can this possibly be?”

Lucky for us, Questlove—a writer, producer, late-night bandleader, and the most accomplished hip-hop and soul drummer of his generation—is used to showing up. It’s worth pointing out that he’s aided here by what has proved to be an incredible find: hours of archival footage of the historic concert series, originally filmed by Hal Tulchin, hidden in a basement, the film tells us, for 50 years. Featuring artists as iconic as Nina Simone and Sly and the Family Stone, as eclectic as Sonny Sharrock and the Fifth Dimension, as global as Hugh Masekela and Mongo Santamaría, and as masterful as Mahalia Jackson and Max Roach, and filmed during one of the most socially turbulent years in American history, Summer of Soul grants its audience access to a treasure trove of cultural artifacts sitting at the intersection of 20th-century civil rights, politics, fashion, and music that was unlike anything they’ve heard before.

Summer of Soul follows in the footsteps of a grand legacy of monolithic music festival docs, from Bert Stern’s Jazz on a Summer’s Day (1959), D.A. Pennebaker’s Monterrey Pop (1968), and Michael Wadleigh’s Woodstock (1970) to—perhaps most relevant of all—Mel Stuart’s wildly underseen Wattstax (1973), the movie that captured Stax Records’ 1972 benefit concert for the anniversary of the 1965 Watts Rebellion. Like Wattstax and Woodstock before it, Summer of Soul is primarily concerned with the unique dialogues that happen between art and audience, style and society, music and politics. Its interest, beyond the irresistible spectacle of a summer music festival, is in the people—the attendees, the artists, the onlookers—all sharing in their work and worldview.

It’s a motley that brings together the Black Panthers, white city politicians, the Black and Latino citizens of Harlem, civil rights leaders, and musical artists that defined their generation. Through present-day interviews with attendees and the artists who performed there, as well as some archival news footage that puts Harlem’s people onscreen in their time, Thompson unlocks the feeling of the on-the-ground festival experience. It truly feels like Woodstock, if the concert footage were untouched but the interviews were conducted 50 years later. The worst thing that can be said of Summer of Soul is that it doesn’t better resemble the concert documentaries of its era, but the best thing that can be said is that it tries.

It goes without saying that Summer of Soul‘s key selling point is its previously unseen performances by legendary artists and—while it would be hard to mess up—the film delivers. There are too many standouts to highlight them all: Gladys Knight & the Pips riding fast over an upbeat rendition of “I Heard It Through the Grapevine”, former Temptation David Ruffin belting “My Girl”, Mahalia Jackson and Mavis Staples sharing the mic for a breathtaking “Take My Hand, Precious Lord”, etc. Then there are the outfits: The Fifth Dimension in bright orange and yellow cowboy vests, the Edwin Hawkins Singers in lime green choir gowns, Mahalia Jackson in a hot pink dress. If you go into Summer of Soul purely for the music and the pageantry, you’ll exit Mount Morris Park still dancing in the streets.

But if you’re looking for a richer examination of the Harlem Cultural Festival in its time and place, a more mixed experience awaits. In transcendent moments, the film’s percussive editing masterfully weaves together big musical impacts on stage with outside protest footage—demonstration chants interpolated over the rhythms of the festival, scenes from boycotts and marches colliding against the park crowd’s relaxed solidarity—beautifully and succinctly capturing the inextricable connections between Black ’60s music with the American social turmoil that gave birth to it. But for most of the film, the editing has the tendency to pull away from what’s happening on stage; performances are overwhelmed by crowd shots, underscoring the role of the people, but there aren’t any of the long unbroken takes of the performers you get in older festival movies, and many performances are cut agonizingly short. At times, you can feel shortchanged.

Although Summer of Soul is graciously slim on gratuitous celebrity cameos, random appearances by Chris Rock and Lin Manuel-Miranda still feel egregious, especially for a film that references Gil Scott-Heron’s “The Revolution Will Not Be Televised” in its title. Even if those familiar faces are welcome to some audiences, it takes a lot of gall to interrupt a freshly discovered Stevie Wonder performance just to hear what Chris Rock thinks about Stevie Wonder.

In general, there seems to have been the assumption in the organizing of the film that behind-the-scenes production information is as interesting as the event itself—that the audience would like to hear about what happened, a half-century later, rather than watch it for ourselves. At its worst, Summer of Soul can start to feel like a behind-the-scenes documentary for a much more famous concert film. (We can only hope for a special edition home media release in the future with more uncut footage.)

Throughout the film, there’s an overwhelming sense that the Harlem Cultural Festival somehow can’t speak for itself. But when Thompson lets the past sing and accents it appropriately, it’s electrifying. Summer of Soul doesn’t have the heart of a radical, but it is a propulsive reminder of the ways art and society speak to each other, even in its clumsier segments. It’s a conversation worth having, wrapped in a forgotten history well worth remembering.