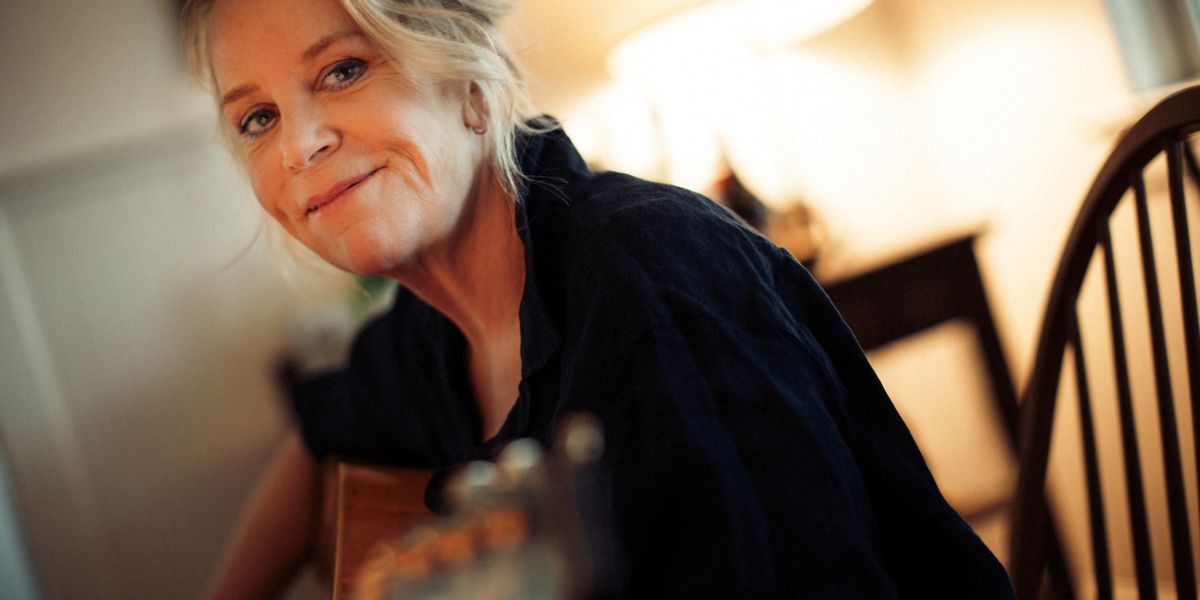 The Dirt and the Stars is Mary Chapin Carpenter’s first all-new album since 2016. In the intervening period, she recorded a collection of gentle, acoustic remakes produced by Ethan Johns (son of Glyn) who now returns to oversee this set. Carpenter’s career has gone through several phases, some of which lasted for a string of albums, some more fleeting. Most famously, there was the Columbia Records era, in which she went from upcoming hopeful to blockbuster seller, reaching her commercial apogee on Come on Come On (1992) and Stones in the Road (1994). Time, Sex, Love (2001) was a transitional piece that led to what I regard as her most wholly satisfying period, the one in which she worked closely with producer/pianist, Matt Rollings.

Their creative union lasted from 2005’s Between Here and Gone to 2012’s Ashes and Roses. Rollings, with his exquisite piano parts, emphasized the yearning wistfulness that had always been present in Carpenter’s songs, making listening to “The Shelter of Storms” and “Jericho” a cathartic and tearful experience. Carpenter stopped writing the kind of rollicking hits that had made her famous (“I Feel Lucky”, “He Thinks He’ll Keep Her”), and the ‘country’ elements of her music yielded to a more strictly ‘singer/songwriter’ sound.

Her first post-Rollings album was The Things We Are Made Of (2016), which was also the first to come out on her independent imprint, Lambent Light. Produced by Dave Cobb, it was quietly gritty and stark – beautiful in its way but monochromatic. What it lacked was anything as crisp and stirring as “Chasing What’s Already Gone” (from Ashes and Roses), “Luna’s Gone” (from Between Here and Gone) or “Swept Away” (from Time, Sex, Love).

Ethan Johns has now brought the warmth and light back to Carpenter’s sound, and Matt Rollings is on keys again. Almost everything on the album succeeds. There’s even a throwback to Carpenter’s most popular era on “Secret Keepers”, which, with its melodic, electric guitar intro, sounds like it could have walked straight out of one of the John Jennings-produced albums of the 1990s. Coming from a writer who has been open about her experiences of depression, “It’s Ok to Be Sad”, a self-exhortation to accept rather than strain against the darkness, has credibility it might lack in another writer’s hands.

Carpenter has always avoided overt, exhibitionist forms of autobiographical writing, preferring to conceal confessional tendencies beneath a veneer of philosophy. That is particularly apparent in “All Broken Hearts Break Differently”, where she’s writing as much about us as she is about herself. People who’ve listened closely over the years will be aware that we’ve followed her through falling in love, getting married, staying married, separating, divorce, and post-divorce. Still, she has generally favored a sideways, observational way of making personal disclosures, almost as if she were writing about someone else, rather than the more direct cris de coeur of, say, Carly Simon.

“Nocturne” is Carpenter’s finest piece of story-songwriting since 1992’s “Only a Dream”. Her ability to slip deftly beneath the skin of her characters, in this instance, a married man haunted by memory and the passing of time, remains in superb condition. The song ends with a painful, realistic lack of resolution. “We’re all trying to live up to some oath to ourselves / Try holding back time, but it will not be held / No king has the power, no mortal the skill / But still you keep trying to see / What’s waiting for you at the end of your days.” Carpenter’s finest songs and many are here, perform a tender ennobling of the human heart. Her voice — intelligent, slightly wry, effortlessly warm without being calculatedly ingratiating — makes the songs eminently inhabitable for the listener.

I propose “Asking for a Friend” as the only song that doesn’t quite find its mark. It’s a folk-ish ballad (usually one of Carpenter’s strengths) that plays around with that ironic phrase; the song’s narrator confides painful feelings to a partner while trying to pretend those feelings are someone else’s. By Carpenter’s standards, it ends up slightly too on the nose despite some lovely, artfully fashioned lines. More successful is the targeted satire of “American Stooge”, a bluesy take-down not so much of Donald Trump as of his enablers, and of all politicians and power-players who sacrifice honesty and integrity for ambition.

Unless I haven’t been listening carefully, I’d swear this was also the first album on which Carpenter uses a couple of well-placed ‘fucks’ in her lyrics. At first, I took it as an administrative mistake when I noticed the upper-case ‘E’ (for ‘explicit’) warning against two of the tracks, but, no, here they are: “fuck all the excuses” on “It’s Ok to Be Sad” and “it’s fucked you up every which way” on “Secret Keepers”. It’s worth pointing this out only because I recall the fuss when James Taylor, one of Carpenter’s artistic forbearers, dropped his first f-bomb in the late 1990s on Hourglass. It’s easy to forget that swear-words are still controversial in some quarters, but the members of Carpenter’s audience, which tend to be bookish and liberal, are unlikely to bat an eyelid. And if anyone’s earned the right to be frank and direct, it’s a Grammy-winning singer-songwriter reaching the grand old age of Album 15. It’s also worth noting that in both cases, the invective adds a powerful, well-judged kick to its parent song.

The album was recorded in Wiltshire, England, with an Anglo-American band, including Jeremy Stacey (drums) and Nick Pini (bass) on the British side with Duke Levine (guitar) and Rollings leading the American contingent and the textures are not dissimilar to those of 2018’s Sometimes Just the Sky. Carpenter has been so consistent that calling Between the Dirt and the Stars her best album in however many years isn’t particularly meaningful. Let’s call it her best album since her last one.