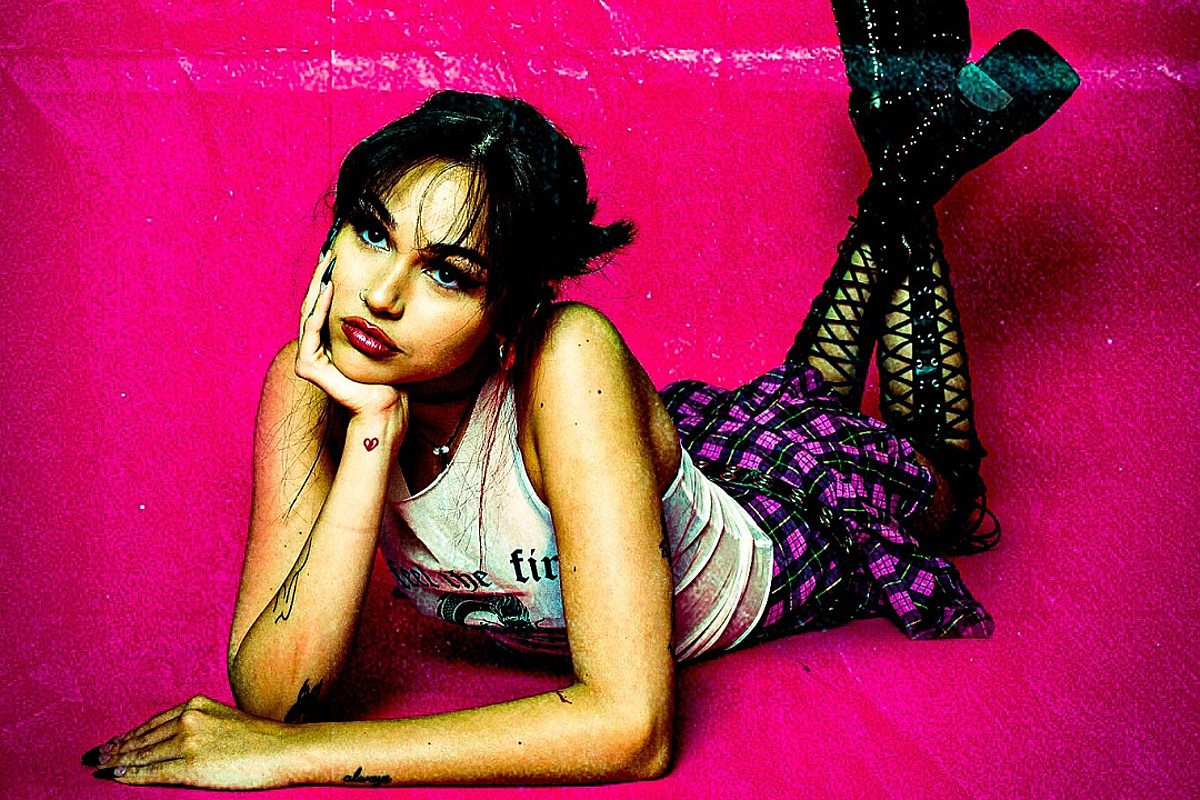 Lindemann’s musical taste was cemented by the Evanescence and No Doubt CDs her mom would blast in the car when the singer was young. “I grew up in a family that listened to rock, metal and alternative music, so that music comes naturally to me. I’ve connected with it,” she says.

Paranoia — a collection of emo-laced pop-punk tracks featuring intimate lyrics seemingly ripped straight out of the artist’s diary — bucks against the current glossy pop zeitgeist, hearkening back to a time (mainly the late ’90s and early ’00s) when women on the radio were slamming the pain away on their guitars while simultaneously inspiring an entire generation of Hot Topic-dwelling mall rats to flip the bird at suburban conformity.

The sound is a departure from the polished electro-pop of Lindemann’s earlier releases, such as her 2016 breakout single, “Pretty Girl.” But Paranoia‘s pop-punk leanings aren’t a musical pit stop or an experimental phase for the performer. She simply can’t imagine doing anything else now.

“I knew for a really long time that the music I was making [before this] didn’t fully represent me,” Lindemann admits. “I always felt like I was trying to fit into the character of those songs. They never really felt like me but I also didn’t know exactly what I wanted to do. I think that just taking some time and finding myself and not putting out any new music for a while helped me discover where I needed to be.”

That rediscovery period led her back to the nostalgic Y2K-era alternative music she grew up on, including the empowering, left-of-center women musicians who made it okay to be different. Paranoia is a sonic and thematic love letter to those artists: the rowdy spirit of Paramore is alive and kicking on tracks such as “Crash and Burn,” while the melodic, restless angst of “Loner” and “Different” wouldn’t sound out of place on Avril Lavigne’s debut record.

With March marking Women’s History Month, Lindemann is aware that there’s still much work to be done in the fight for gender equality in the music industry and beyond, even if things are much better today than they were when the artists who influenced her first made their voices heard.

“I was watching a TV show from the early 2000s yesterday and it was so different than how things are today. Everything was so misogynistic. It was normal to make fun of women and put them down and make jokes at their expense. We’re finally changing and acknowledging those issues as a society. It’s so important to keep lifting women up because for so long, we didn’t get the respect we deserve.”

It’s a point Gwen Stefani made back in 1995 on No Doubt’s breakthrough single, “Just a Girl,” which Lindemann just released a cover of. The artist says she can relate to Stefani’s lyrics about feeling trapped in the societal restrictions surrounding womanhood, especially the unique dangers girls face. (“The moment that I step outside / So many reasons for me to run and hide / I can’t do the little things I hold so dear / ‘Cause it’s all those little things that I fear,” Stefani sings, a sentiment echoed by Lindemann’s admission that she’s afraid to go get gas or take a walk by herself in Hollywood after it gets dark.)

“Growing up with ‘Just a Girl,’ it means a lot to me,” Lindemann says. “It’s my childhood. It has a special place in my heart.” Below, in celebration of International Women’s Day, Maggie Lindemann waxes poetic about five incredible women in music who inspired her debut EP, Paranoia.

When she was starting out, a lot of people discredited her because she was a young girl who, if you watch old interviews, wasn’t trying to hide or tone down her personality or be overly nice. She was just so herself. She never conformed into the person that people wanted her to be. I look up to her a lot because I struggled with conformity, so she was really inspiring to see. Also, fashion-wise, she started so many trends—all the skulls with bows and hot pink. Avril is the reason that [look] was so huge. Even with her music, she was doing pop with this punk edge. For anyone who grew up on pop-punk music, I think she’s a huge influence. She certainly influenced me and my fashion and my music.

My mom was obsessed with Evanescence growing up so anytime we were in the car — which is when me and my mom would listen to music together — she would put on Evanescence. I love Amy Lee. Her voice is amazing. Her style has influenced me a lot too, like the long black hair. Her early look was more Victorian-esque goth, like the long dresses with pale skin and piercing blue eyes. She’s also influenced the way I sing, too. My producer always laughs because I’ll go into these breakdown melodies in the studio and he’ll be like, “Go Amy on them!” I do this operatic baby voice thing and it’s super inspired by Amy Lee.

I grew up listening to Paramore on my own. I think I discovered them when I was in middle school, maybe even younger. I remember hearing the soundtrack for Twilight — which, like everyone else, I loved so much — and hearing “Decode” for the first time and thinking, “Oh my God, this is insane.” And then I remember watching that music video over and over and over again, just being obsessed. Having a lead singer of a pop-punk band be a woman is always so cool, especially when they’re so mainstream. Everyone knows Paramore. I just think that’s so inspiring because it shows you can break out of that box and reach so many more people.

My whole EP was heavily inspired by Paramore. “Crash and Burn” was inspired by “Misery Business,” and that part right in the beginning when it starts to hype you up. I love Paramore so much but I’ve never seen them live, which is so sad because I really want to. Also, I’ve literally only heard amazing things about Hayley Williams. She’s a really good person to look up to.

Lana Del Rey was really impactful for me. I started listening to her in 2012, which was just a really, really hard year for me, being my freshman year of high school. It was a difficult transition and I listened to Lana during that. I mean, her best album [Born to Die] came out in 2012, so I was right in the middle of that. From being in that state and listening to someone so much you end up feeling a connection, like you’re really close to that artist. She was that comfort artist for me and I always listen to that album when I need comfort.

Her melodies are insane. I love when you’re listening to an artist and you can tell that they wrote it—like you can just tell that the lyrics are coming from them. It feels like you’re actually talking with the artist and connecting with the artist, which is really special. Also, her whole aesthetic was so on brand, which I think has driven me to focus on my brand and image. I mean, she took the idea of a “sugar daddy” mainstream. [Laughs] I didn’t know what a sugar daddy was until Lana sang about it! She had such a specific thing going on and I think that’s really cool. I definitely took a lot of inspiration from that.

GWEN STEFANI OF NO DOUBT

I grew up listening to Gwen because my mom was obsessed with her. I always thought she was so cool. I’ve always been obsessed with everything about Gwen Stefani. I love her outfits, her makeup, her lyrics, the way she performs on stage. She’s so talented with everything that she does. Like, she was a frontwoman in a ‘90s rock band, and then made amazing solo music. Also, she just seems like a sick person. She would wear those low-rise baggy pants… I always thought that was so cool.

Maggie Lindemann will play a virtual concert live from The Roxy in Los Angeles on April 9. Get tickets here.