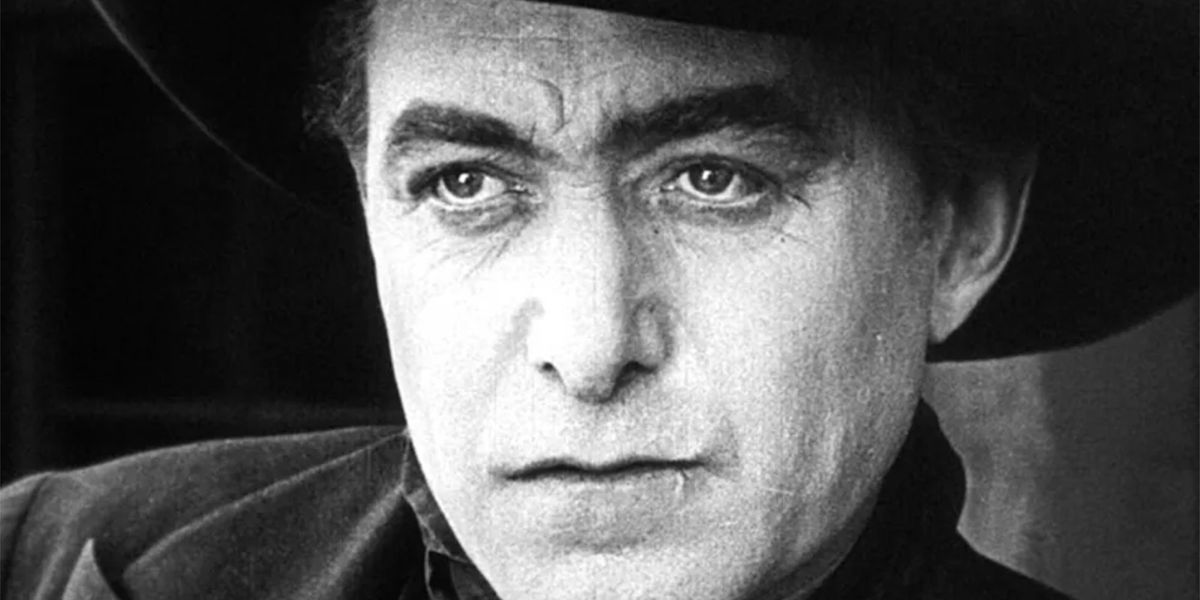 John Ford launched his career as a feature director with a string of more than 20 wildly successful westerns starring cowboy actor Harry Carey, who often played an iconic character type known as “the good bad man”. Only a handful of these films survive, and they’re not always complete. Universal has undertaken 4K restorations of the handful, and Kino Lorber offers two of them freshly on Blu-rays: Straight Shooting (1917) and Hell Bent (1918).

As Ford’s debut feature, Straight Shooting could hardly be more important to his career or the history of westerns. As befits silent westerns, the story is simple, even flimsy. The drama mines the history of range battles like the Johnson County War.

A despotic rancher (Duke Lee as Thunder Flint) tries to roust peaceful settlers with violence, including the hiring of gunmen. One such bad man is Cheyenne Harry (Carey), who feels a change of heart like a thunderbolt when he witnesses a funeral amid one family. Instead of the Cavalry riding to rescue in the climactic battle–or the Ku Klux Klan, as in Griffith’s The Birth of a Nation–only three years earlier–Harry leads his outlaw gang of rustlers to the rescue.

Our perception of events is slightly marred by missing footage, perhaps a result of censoring violent scenes or just common wear and tear. Most notably, a saloon fight is rendered incomprehensible as previously unknown characters abruptly jump out a second-floor window and onto horses.

Nevertheless, what we see is often ravishing. Ford and photographer George Scott use depth for magnificent shots: the godlike rancher towering above his ant-like cattle in the valley; the heroine (Molly Malone as Joan Sims) introduced sitting on a tree branch; Beale’s Cut Stagecoach Pass with a man on horseback perched on each cliff rendered in silhouette; a street confrontation that Sergio Leone would envy, with implied commentary from a “horse’s ass”; and endless compositions on the diagonal or with movement from “behind the camera” into the far distance.

We’re treated to many eye-catching examples of Ford’s obsession with doorways as magical passages from domestic space to the wild outdoors, where characters stand in liminal shadow. Ironically, it seems the heroine’s cabin “interior” is only a wall open to the sky, sometimes with a strong wind blowing across it.

One young hero, Sam Gibson, is played by Hoot Gibson, today remembered as a limping “old coot” in talkies. He’s young here, although he already has his limp. The bad bad man, as opposed to the good one, is played by the wonderfully named Vester Pegg (Placer Fremont), who gets the tense rifle shoot-out with Carey around two sides of the apparently useless jail.

Still, the main attraction is Carey’s Cheyenne Harry, lavished with close-ups, sometimes his face framed in ovals, and once or twice looking boldly into the camera in collusion with the audience. His introduction, also in a kind of oval, is too brilliant and surprising to be spoiled here. Ford even allows Cheyenne Harry a shot of tear-stained subjectivity. Carey hasn’t got a limp, but his swagger tells you plainly where John Wayne got his distinctive walk.

Carey, Lee and Pegg reunite as variants of their personae in Hell Bent (1918), a film we previewed for the 2019 San Francisco Silent Film Festival. Carey plays a drunken card sharp who becomes the buddy and bedmate of another rascal (Lee as Cimmaron Bill) before the love of a sweet damsel (Neva Gerber as Bess Thurston) leaves him mixed up with robbers and a desert sandstorm. This rescued print has plenty of jumps and missing footage, though the story remains coherent.

One wonderful element is the self-conscious, witty, elegiac introduction, in which a western novelist is advised by his publisher to imagine a hero who’s a mix of good and bad qualities. He studies a painting by Frederic Remington–a literal framing device–and the camera dollies in to make it come alive. As we wrote in our festival preview, “striking visual moments include the use of silhouettes on the sand and a shot that pans down a hill to follow a tumbling carriage before it’s overtaken by its own abandoned horses.”

Universal’s 4K restorations are pretty much fantastic and don’t compare even slightly with the unwatchable eyesores available online. Tag Gallagher’s visual essays on both films call attention to Ford’s use of space and how it parallels the films of his older brother Francis Ford, who was instrumental in his career. Historian Joseph McBride offers commentaries about Ford as “an idealist who dwells on the destruction of his own ideals”. Hell Bent has the most valuable bonus: the audio of McBride’s 1970 interview with an irascible Ford on the day he announced his retirement.

McBride observes that out of Ford’s 65 silent features, only 25 survive in whole or in part, and only a few of these are the Carey westerns. The ones we have are very good and make us mourn what’s lost to time, as Ford continually does. At least these titles are still here. My only quibble is that these one-hour films could have easily made a double-feature instead of separate discs, but there you are.