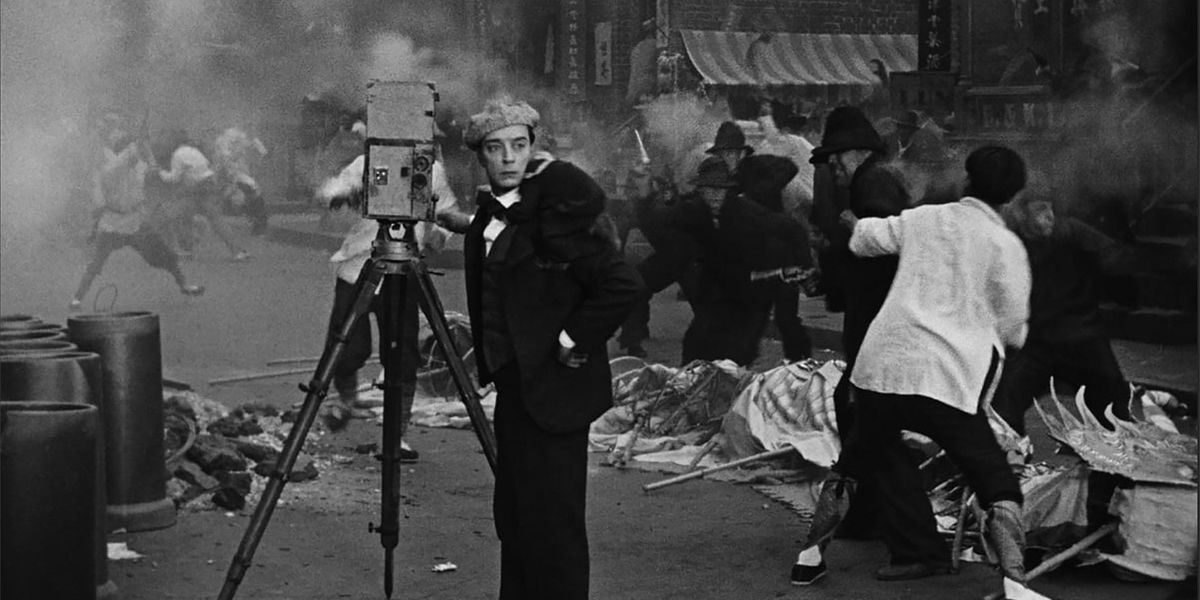 This Criterion Blu-ray of a new 4K digital restoration of Buster Keaton’s The Cameraman (1928) is actually a double-feature with his next and last silent feature, Spite Marriage (1929), although you don’t realize that without reading the fine print on the back. Ever since seeing them together at Berkeley’s UC Theatre in the late 1980s, I’ve thought these films are as funny and characteristic as any of Keaton’s other silent masterpieces, although they’ve tended to get short shrift.

The Cameraman opens with Buster as Buster, a street photographer who makes tintypes, a very outmoded gimmick for earning a living. These details show Buster as out of step with the modern world and also handicapped by carrying around his bulky camera like a cello.

When he lines up a customer for a shot, the previously empty street and sidewalk are abruptly overwhelmed with hundreds of people as tons of paper pour down from the heavens for a ticker-tape parade in honor of some celebrity. In commentary retained from a 2004 DVD, historian Glenn Mitchell identifies stock newsreel footage of Gertrude Eberle, first woman to swim the English Channel. One of the film’s minor motifs is the evanescent nature of fame and popularity, a point underlined by a dialogue reference to herbal tonic inventor, Lydia Pinkham.

The point is that Buster and his old-fashioned livelihood are swamped by this whirlwind that vanishes as quickly as it appears, and the second point is that he meets and is smitten by Sally (Marceline Day), who works for MGM Newsreels. Frantic modern life has jammed them briefly together, as in a subway car or some other public conveyance (which also figure in the plot), so that he’s ready to pass out from her intoxicating hair in his face.

An effective use of offscreen space finds the camera panning to the right to reveal that, while it seemed Sally was the only person remaining from the paper melee, Buster too stands offside like a bit of flotsam. (A more crucial use of offscreen revelation will figure in the film’s ending.) Buster convinces Sally to have her picture taken before she disappears with overbearing photographer Stagg (Harold Goodwin), an animal-sexual name signaling aggressive territoriality.

Buster tracks Sally to her office, where she encourages him to try his luck in this new-fangled newsreel game after he trades his tintype camera for another man-sized impediment on a tripod, a still out-of-date newsreel model that tilts and sags like Charlie Brown’s Christmas tree. His first efforts at newsreel photography display a barrage of avant-garde effects that wouldn’t be out of place in Dziga Vertov’s Man with a Movie Camera (1929), but the boss (Sidney Bracey) doesn’t appreciate it even if the viewer does. Apropos of that point, I love how PopMatters’ Colin Fitzgerald pegs this movie as a comment on MGM’s arrogant relationship to independent artists like Keaton.

The third act mostly takes place in Chinatown, where a dragon parade erupts into a “Tong War” with Buster and his camera at the still center of the screen’s riot. Modern commenters duly acknowledge that this Tong war is a cultural stereotype. Yes it is; now let’s go beyond the obvious and into nuance. As a minor point, we see dozens of genuine Asian-Americans getting a payday here, as opposed to white actors in makeup; considering that Keaton’s films weren’t above blackface gags, this is something to be grateful for.

More importantly, the sequence functions as a parody of the Tong clichés in US pop culture, presenting the concept as inherently absurd. As literally everyone on screen pulls out a gat and begins firing, even from the windows and even from tommy-guns, the image bursts well beyond the boundaries of Chinese people with blades and into a vision of gangland Chicago and the Wild West, two other popular film tropes of the time.

While many Italian-Americans have deplored mafia clichés as a cultural stereotype, others have defended them as American mythology to be proud of. Are there Chinese-Americans who prefer Americanized tough-guy bad-ass clichés to the more common comic relief of pigtailed servants saying “No tickee, no shirtee” or lying in opium dens? Let’s hope so, but something much deeper is going on in this sequence.

In contrast to the opening parade scene, where Buster is engulfed and paralyzed by a screen full of chaos, here he commands and even directs the action from his eye of the hurricane. Far from a bystander or impartial recorder, he hands a knife to one wrestling couple for added excitement as he plans to “make good” with his footage and calmly navigates the uproar for the best angles.

One implication is that he’s not merely recording “news” but creating screen entertainment, that his camera and presence are catalysts of violence, especially stereotypical violence, for audience consumption, that “news” and “movies” are all about selling this kind of drivel, that the gang war has shown up for the camera just as the actors have shown up for a paycheck, all to be directed by Buster for his living.

Was this concept thought out by the filmmakers or arrived at instinctively while going for the gag? Is this intentional satire of cultural stereotyping and cinema, of production and publicity, of consumption and criminalization? And what of the running gag of the frustrated cop (Harry Gribbon), who takes Buster’s antics for lunacy? Does this imply that in order to make your way in the modern city, you must create anti-social chaos and craziness for your selfish ends, that you must exploit and avoid the law?

These questions are consistent with silent comics’ relations with policemen (always running from them) and with Keaton’s self-consciousness about the film medium, as in Sherlock Jr. (1924). However, I don’t know or care if Keaton or director Edward Sedgwick thought deeply about these issues. It’s the critics’ job to find such things more than it’s the creators’ job to put them there. I’m trying to plumb why this sequence is so rich and alive, so much more perverse and persuasive, than tut-tutting at ethnic clichés will get me.

We haven’t even mentioned Yankee Stadium or the monkey, but let’s move on to Spite Marriage. Although it’s handled on this disc as almost an afterthought for completists, something to accompany “his last great masterpiece” The Cameraman, I beg to differ.

Billed as both a Keaton production and a Sedgwick production, Spite Marriage is clearly Keaton’s creative baby in terms of conceiving and presenting the gags and characterizations, and it’s so delightful and surprising from beginning to end that I consider this, Keaton’s last silent film, to be his last great masterpiece. As the Wikipedia entry notes, contemporary reviews were lavish with praise, and I see no reason to dispute them 90 years later.

The film’s most refreshing surprise is Dorothy Sebastian as pampered and selfish Broadway star Trilby Drew, who’s annoyed that her pretty-boy co-star (Edward Earle) is making time with some blonde hussy (Leila Hyams). Trilby is the object of adoration by Elmer (Keaton), a laundry worker who pretends to be a top-hatted millionaire to make her acquaintance. A series of steps prepare us for Trilby’s impulsive decision to marry him.

Keaton’s silent features sometimes have heroines who are borderline insipid or, as in The General (1926), really unworthy of his hero, and this may or may not be Keaton’s comment on love as reality or film convention. This film opens as his most acid take on matrimony. Bad marriages are something we see in comedies of Laurel and Hardy, W.C. Fields, Charley Chase, and Harry Langdon, but Keaton’s silent features usually end in the threat of marriage rather than begin with it, and that’s another of this film’s refreshments.

Trilby seems at first the most extreme example of a heroine’s impossible behavior, yet she undergoes a genuine and credible transformation, even more than Elmer. Along the way, Sebastian matches Keaton as a comedian, both in character and slapstick. In a kind of irony possible only in slapstick, her physical highlight is when Trilby is passed out drunk as Elmer tries to put her to bed. She’s the funniest dead weight you can imagine, and the scene wouldn’t work so well if Sebastian weren’t as able and committed as Keaton.

As with the dressing room bit in The Cameraman, this is physical hilarity based on chastely erotic possibilities, and the camera needs only to watch a brilliantly rehearsed sequence of balletic moves. Under the action, which never stops being funny no matter how often you see it, Elmer’s frustration mixes with his innate gentleness, while Trilby’s passive-aggressive alcoholic stupor (right after a scene of outright aggression) reflects her own frustration. The scene epitomizes the idea of two people who’ve made a terrible decision and become burdens to each other. She’s the albatross around his neck while he’s the savior she doesn’t want or need. Like so much great slapstick, it’s also tragedy if looked at from a different angle.

One interesting nuance is that Trilby is obviously much richer than her false millionaire and will never require his support, which he really couldn’t provide anyway. Her independence as a successful professional gives an imbalance to their relationship. She could only remain with him as a personal choice, since her necessity never enters into it, and so her decision must be based on a new reckoning of his qualities in which they work together to overcome danger. It’s less about his rescue of her than their collaboration in mutual trouble, and she’s an active participant in the big fight. As in The Cameraman, Keaton’s hero finally contrasts with his rival’s feet of clay.

It’s as though Keaton is generously showcasing his co-star, and she justifies it. The commentary by John Bengtson and Jeffrey Vance (from a 2004 DVD) indicates that Keaton and Sebastian were an item, notwithstanding Keaton’s wife. These historians also do an excellent job of linking gags and visual ideas to Keaton’s previous films. The most obvious is that the hero and heroine find themselves alone on a boat, as in The Navigator (1924). It’s never a matter of simply repeating gags but of refining and combining them into a fresh entertainment, and one with an especially dynamic heroine.

An early sequence finds Elmer crashing and trashing Trilby’s play, an old-fashioned Civil War melodrama with all the clichés, including a blackface mammy. In this case, it’s intended to look ridiculous and outdated, and I think Bengtson and Vance correctly peg it as a spoof of David Belasco’s The Heart of Maryland (1895), which had just had at least its third filming in 1927.

Keaton’s last two silent features were also his first MGM films, and the rap on Keaton’s MGM tenure, as promulgated by Keaton himself and discussed in the disc’s booklet and bonus features, is that he regarded moving to MGM as “the worst mistake I ever made”. Bonus perspectives on Keaton’s MGM period, his personal issues, his final decades, the way that he kept finding work in various capacities, and the real-life locations he used in his films all touch on this point.

There’s truth in that. His MGM talkies fail to be masterpieces, though they’re hardly devoid of interest and were in fact popular, but that’s no reason for these two silents to be undervalued. It looks as though today’s critics have gotten around to admitting the brilliance of The Cameraman while Spite Marriage awaits the re-assessment it deserves.

A final extra, a fetishistic documentary for camera buffs, shows off the innards of many classic hand-cranked silent cameras, presented as affectionately as though showing off what’s under the hood of a Stutz Bearcat. Those who appreciate finely constructed meldings of art and craft from a bygone era are as likely to admire these old cameras as the best films made with them, shot by people intimate with their quirks and capacities. The Cameraman captures such intimacy and personality at precisely the moment it was going obsolete. There’s glory for you.