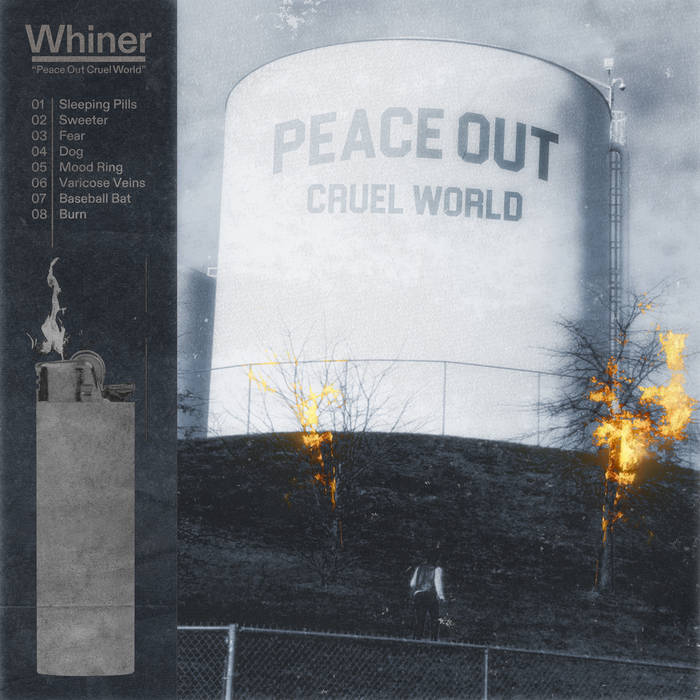 Every musician inevitably asks themself the ancient phrase: what do you do it for?

Do you do it for the purpose of creativity, as a means of expressing your loves and inspirations? Do you do it to authentically present yourself to the world at large, revealing what’s behind the curtain? Do you do it to prove others (i.e., the haters) wrong, to show them that your dedication to your passion outweighs all? Or maybe, if you’re Whiner – New Jersey’s DIY institution of satanic glam-pop – you “do it all for the good times, baby.”

Having formed in the mid-2010s, Whiner first emerged in 2016 with the release of their debut LP Forever. In a time where bands were trending towards emo with alt-country leanings, Whiner fused post-punk, glam rock, and indie pop with a gothic, macabre edge akin to the darkwave of Cold Cave. If you were attending house shows around this time, and were lucky enough to bear witness to their presence, the group instantly captivated. Strutting with a natural born swagger like The Lost Boys of Jersey Shore, they would rip through sets with a gargantuan, danceable sound. They were raw and a little sloppy, cool but not fully collected, yet sold every second of it through utter belief in themselves. You could hear grandiose aspirations of superstardom that felt inherent to who the band were as people, and made them a unicorn compared to their scene and touring contemporaries.

In the five years since the release of Forever, Whiner went relatively quiet on studio material, only releasing the four-track EP you never have to feel this way ever again in 2019. At times it seemed like another album would never be released, aligning them with fellow Jersey act Lunch Ladies as a modern one-album wonder. But the band kept at it, crafting their sound their way and on their own terms. Now, with Peace Out Cruel World, we finally have their second LP, and it’s a one-for-the-ages glamour fest that sounds, feels and lands like a band on their way to the stratosphere.

“Sleeping Pills” opens the album with an “Up the Beach”-esque guitar line and shimmering synths that tickle with intrigue, leading into Cameron J. Castan’s opening lyrics about razor blades and dominatrixes. There’s a lot to love about the track: beachy tones, reverberated feedback, cavernous atmosphere, and a hook that soars like a bat out of hell. Without missing a beat, the song transitions into the brooding, glistening “Sweeter,” where Henry Heissenbuttel’s synths and Christian Castan’s guitar add the candy coating to Cameron’s proclamation that “You can travel round the whole damn world/You can lose your mind, you can sell your soul/Things are sweeter than they seem...” Two tracks in, and the band has already delivered unto us their mission statement: We’re dead inside, let’s party.

The rest of the album is sequenced beautifully, ebbing and flowing with momentum in all the right places. “Fear,” with a throbbing bass line and irresistible beat, plays like Nine Inch Nails at their grooviest. “Mood Ring” mixes its new wave guitar leads and plump synth bursts with the most upbeat tones on the record, adding some trap-like flair from the drums of Johnny Dynamite. “Burn” closes the album tastefully, using its softer dynamics to match the ghostly soloing and distortion. But where the album shine’s most are in its singles, the strongest of the bunch being “Dog.” With a britpop drum groove, Beach Fossils bass line and glimmering guitar lead, Cameron croons over the track like Alex Kapranos, filling every line with affection. Eventually, the track is carried to its end by a synth melody that feels indebted to Minnesota dream pop band Vansire.

It’s impossible to make a record like Peace Out Cruel World without possessing a blistering sense of bravado – and by golly, lead singer Cameron J. Castan has it. His domineering drawl coats every track here with a lacquer of confidence, like a next-generation Brandon Flowers, or a reincarnation of INXS frontman Michael Hutchence. But it’s the way he writes and delivers these lyrics that sticks with you most. Take for example “Varicose Veins” – on paper, “I feel it in my varicose veins” reads like a campy quote from a Vincent Price film. But having preceded these lyrics with the vampyric “I don’t have a heart” sung in ethereal falsetto, you can’t deny how Cameron embodies his characters with great aplomb.

“Baseball Bat” only further proves his masterful way of songwriting. Drawing from the imagery of your conscience divided on your shoulders, the lyrics “There’s an angel on your shoulder saying sweetie don’t you know you’re not perfect” strike like a dagger to the heart. And yet, they don’t strike nearly as hard as the titular baseball bat, being used to bludgeon all those motherfuckin’ haters tryna steal his soul.

Rarely does a record from the DIY underground sound as ready for the big time as Peace Out Cruel World. It’s the rare type of record that never repeats one of its musical thrills while offering multitudes of them. It takes the darker sides of post-punk, romance and the heart and makes them accessible without falling into the trappings of trite commerciality. Quite frankly? These songs feel just as at home at a house show as they do at the House of Blues. It’s a near-impossible balance to achieve – but Whiner, in all their glory, proves they can do it time and time again, regardless of what time it is or when it will come. And with that: let the good times roll.