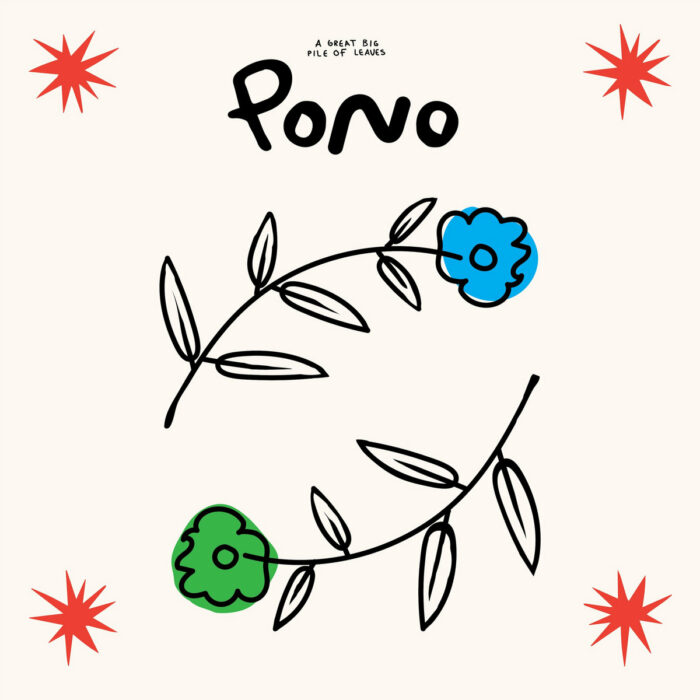 As soon as the weather turned this year and going outside began to feel halfway pleasant, I went out and bought a new bike. My old one had been stolen out from my back porch at the onset of winter two years before, just a few months before everything started to shut down. Now, finally, although I still couldn’t really go anywhere aside from a few quick trips to the library (holds only; no browsing), I did feel like I could at least…go outside. Move around town, feel the warm air penetrating the (really cool looking I assure you) aerodynamic holes in my helmet (I always wear a helmet—I’m clumsy). Getting back on the road for the first time in so long, even if it was just around the corner, it felt a little like freedom.

Whether or not that feeling was true in the context of everything doesn’t really matter right now. What does matter is that You’re Always on My Mind, the 2013 full-length from A Great Big Pile of Leaves, just so happened to be the absolute perfect album to listen to under these parameters—spring slowly becoming summer to the sound of the band’s laidback guitar pop, the warm splash of “Snack Attack” or the easy fun of “Slumber Party” coming through my headphones as I wheeled briskly and effortlessly down those Fairmount hills, not so worried about slogging my way back up when it was time to go home. You’re Always on My Mind had been out for 8 years at this point, but it still felt unbelievably fresh, sturdy as it was for so many oncoming sunny days.

As reliable and endlessly enjoyable as You’re Always on My Mind and their 2010 debut Have You Seen My Prefrontal Cortex? were, one might not see the point of a new record from A Great Big Pile of Leaves after so long. On those two records, this band basically perfected their craft—buoyant, noodly pop songs that avoid fussiness or catharsis in favor of a kind of soft joy. The pleasure of midnight cravings or mild, sunny afternoons.

Even as I write about it, I realize that I’m not a big fan of the “does the world need this?” or “why should they do this?” line of questioning. I’d say that I’m just making up a person to be mad at but I’ve spent a lot of time on music forums and I know that these people exist. “Why should they do this?” Why should anyone do anything? Why should I ride my bike around town when I’m still not allowed to go anywhere? Well, because I’m losing my mind otherwise.

A Great Big Pile of Leaves took 8 years to follow up You’re Always on My Mind, but Pono doesn’t exactly sound like the kind of record that would take the better part of the decade to make. This is not to say that it’s insubstantial or lightweight—the songs on Pono are perfectly up to the standards of You’re Always on My Mind and Have You Seen My Prefrontal Cortex? They are certainly cut from the same cloth and folks, that cloth is still of the highest quality. And that’s just it—maybe it’s too easy to say that this band picked up right where they left off in 2013. But for a band who I consider to have some of the chillest music in this scene, I can’t think of a better way to come back after so long than with the casual, earnestly friendly wave hello again that Pono embodies.

Alright, there are some differences to speak of here. Maybe Pono could have come out 6 years ago and nobody would have batted an eye, but it’s not a carbon copy of You’re Always on My Mind. On Pono, the songs reach for a new kind of expansiveness, the loosely woven guitar lines resonating for just a touch longer into a distant echo. On “Waiting For Your Love,” a swaying, plaintive core gets louder and more emphatic in its final minute, and for a moment the band indulges in a wall of sound, filling in the hollowed-out space that those rippling cymbals have been carving out all along. When the song returns to that core melody in the last seconds, the elements are essentially the same. But you’re left with an awed impression of how massive this band can sound when they want to, and that contrast helps make for one of the best songs of their career.

“Writing Utensils,” which has been re-imagined here after its original appearance on a 2012 Making Moves 7-inch, pulls a similar trick, capitalizing on the fuzz and feedback of the original while throwing the vocals and lead guitar into shining clarity. When you squint really hard in these moments, you can see where the band spent a great deal of their time all these years, perfecting this subtle but important sonic personality that makes Pono feel like a step into their future.

But the benefits and joys of Pono are not only for studio-minded folks to deduce. Pono, like all great AGBPOL records, goes down easily and smoothly—the hooks are plentiful and boundlessly catchy (“Swimmer,” in particular, really digs into your brain). The songs are also fun and often quite sweet, like the music music everywhere theme of “Kitchen Concert” or the up-all-night-at-the-beach vibe of opener “Yesterday’s Clothes.”

Pono is great from a stationary position, but given how perfectly You’re Always on My Mind hit during those first few weeks back on my bike, I knew that Pono needed a real test in motion. So I spent a few nice days bopping around the city with A Great Big Pile of Leaves in my ears.

At this stage, when things are kind of opening up but we’re all aware of the fact that we’re one baby step away from a full repeat of the last year (or maybe by now it’s a foregone conclusion, who knows), I think we’re all craving a kind of rebirth narrative these days (I am). It’s a fantasy, obviously, but it feels good for a moment just to pretend that we can start over, be new people in a new time, shed our skin or whatever it is people want to do. Cue “Hit Reset.”

Dodging potholes in the ground

Weaving through cars in the street

Now that’s a rebirth narrative that fits in eerily well with the pockmarked streets and confused traffic of my little Philly neighborhood. I put it on repeat as I twisted my way past brick row-homes and cars infuriatingly stalled in bike lanes, making my way to a cautiously bustling coffee shop where I’m trying to wrap this up. It makes for a simple pleasure that’s sure to turn “Hit Reset” into one of the defining songs of my year, and Pono is full of those simple pleasures. It may still be a fantasy to bask a little in everyday joys, but A Great Big Pile of Leaves have proven that their knack for it is as vital as ever.