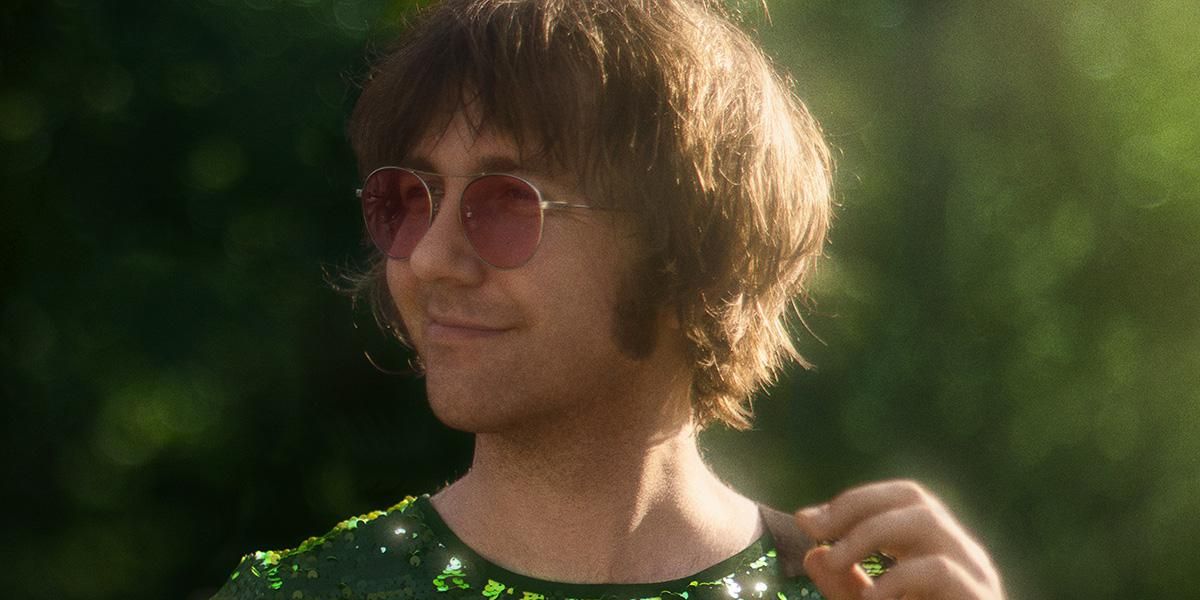 Aaron Lee Tasjan is a mad, creative, singer-songwriting, guitar-playing genius. The proof of this was already evident on his previous creations, but he has taken it up a notch on his latest release, the flamboyant Tasjan! Tasjan! Tasjan! These 11 songs successfully combine memorable musical tropes from rock’s past with personal reflections and observations about the changing world to explore our existential condition.

Tasjan’s technical mastery of the electric guitar and a host of different sonic effects allows him to bend and shape classic styles and ironically present them sincerely. He’ll bemoan the death of guitar-based rock seductively using both synth sounds and his axe to create a nostalgic throwback to 1980s rock on “Computer of Love”. He wonders if our avatars are who we really are. The Cars or Devo, you get to pick. One could easily confuse his self-penned compositions for outtakes from classic bands from the past. “Up All Night” could be a lost Tom Petty song, “Feminine Walk” for Lou Reed, “Don’t Overthink It” for the Talking Heads, etc. The similarities are intentional. This is meta-music for those who remember the past and aren’t afraid to repeat it.

The fact is, as Tasjan’s songs illustrate, the sounds of the past are as much a part of us as our individual experiences are. The truism that a song can trigger memory is more than just a parlor trick. When we were young, many of us found solace and joy in music when life itself was unhappy. The tunes themselves have become part of who we are. What does it mean now that a particular record meant so much to one back then? Tasjan understands the emotional truth of this even as he struggles to find the significance of it all.

Tasjan explores his sexuality and other intimate concerns as well as more social and cultural topics on these songs of self-discovery. “It’s really not so sad / Pretending things are not so bad”, he wistfully admits on “Not So Bad”. That makes sense as a coping mechanism, but other cuts such as “Now You Know” and “Another Lonely Day” show the pain caused by feigning to be someone you’re not. The duality of artifice and authenticity are parts of the same gestalt. Avatars are not just a computer gimmick. We put on roles all the time in our interactions with others and ourselves. It doesn’t take an Oliver Sacks to understand our brain neurology speaks in many voices.

“Cartoon music for plastic people,” Tasjan sings as he notes the limits of self-expression. That is not a Zappa-like diatribe against phoniness and hypocrisy. Instead, Tasjan knows the boundaries of our individuality are both internal and external. Plastic people have real needs. Realty is absurd. Instead of going down the rabbit hole, he suggests celebrating this fact. The lyrics to “Dada Bois” reveal the benefits of being confused. Tasjan rejects rationality in favor of nonsense to protest the modern music industry’s situation and the larger capitalist values that form its foundation. Besides, it’s much more fun! Pass the egg salad.

Gertrude Stein famously wrote, “a rose is a rose is a rose”, with the aim of separating the rose in her poem from the one used by poets in the past as a metaphor for Eros or as a symbol of political affiliation or as a reference to anything but the actual flower in front of her. Tasjan gave this album the repetitious title of Tasjan! Tasjan! Tasjan! with a similar intent. This album is not about the Tasjan you think you know, but the real one. The paradox is that nothing is genuine except the fake.