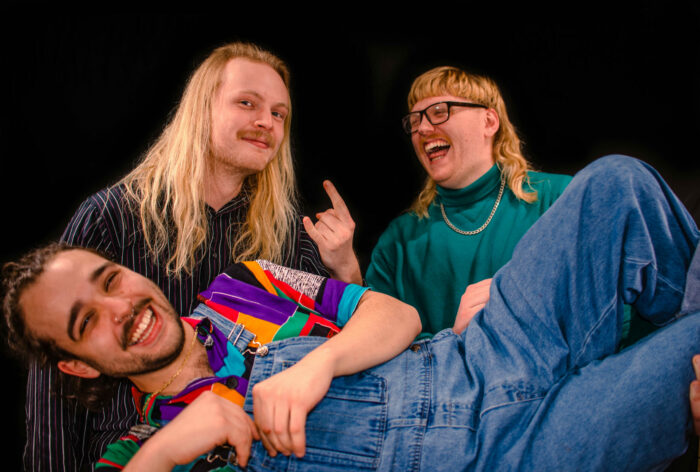 “I’ve always loved Bruce Springsteen from a young age,” Roddie Gadeberg of niiice. said over the phone, discussing the latest single and video from the Minneappolis-based three-piece: a cover of the Bruce Springsteen classic “Born to Run.” The decision to record the cover came since the band “hadn’t really done many livestreams over the course of the pandemic, so we were like let’s do something to show for this time,” Gadeberg said. “It’s just kinda for shits and giggles.”

The group’s grimy but intricate punk style makes for a perfect take on “Born to Run,” and they even get an assist from bassist Abe Anerson’s dad, Doug, who steps in to play the role of Clarence Clemons in their tribute E Street Band. While the cover is a great reminder of how hard niiice. rocks—as is their recent Audiotree session—they also are at work on new original music.

“We got a record almost all the way written,” Gadeberg said. “We’re not trying to rush it. I think in the past we really tried to turn out stuff as quickly as possible, but we’ve been taking our time with this record and just letting it come. It’s been a really fun writing process. I refocused and I think it’s the most fun I’ve had writing a record since our first one. None of us really have too many expectations, we’re kind of just hanging out and having a good time and I think it’s been a cooler experience.”

Check out the video below, along with Roddie’s top favorite songs by The Boss:

“I just heard that album for the first time in its entirety pretty recently, but his version of that song; I just love how raw it is. The cover of it years later was the bigger version, that was the hit but his version…there’s just an authenticity to it. It feels very like him.”

“It’s a cool album intro. I think he’s got really good album intros, period. Every album I’ve heard of his is always a punch in the mouth and like “ok, let’s go.” I think that one’s cool cuz it starts out with the slow piano intro and then it just keeps on going and builds from there. I like that line “I found this guitar and I learned how to make it talk.” I love the lines like that.”

“It’s a cool little fun tune. It’s got the country vibe to it, like the twangy guitars, and it’s just fun. That’s what I love about his music a lot too is just how fun most of it is. That one’s about his relationship falling apart, but like it’s just sung in a fun way. It’s dancy, you can dance to it all. I try and bring a lot of that kind of vibe to our music as well. Like, to talk about more serious things but never to the point where you take it too seriously and you can’t dance and have a good time to it.”

“He just has a way of writing – the way he tells stories just makes you feel like you’re there. Obviously I’ve never built a ‘69 Chevy to use it to race in the street and make money off of that…But the way he tells that story makes you feel like you’re part of it and you were there helping build the car. I love how the story goes, how it starts with he built this car with his partner Sonny and then they’re racing in the street and he ends up meeting his wife and it’s this full circle story. At the end him and his wife are having troubles (or I dunno if they’re supposed to be married or anything) and it kinda loops back around to like “let’s hit the strip and drive.” I just like how he tells that story. It’s also just a really pretty melody.”

“That was one of the first ones I heard by him that I really connected with. I’m from a super small town in Montana so the concept of getting the fuck out and going and seeing stuff and experiencing life was always super relatable to me. So the first time I heard that on the small town radio—the station in my hometown—I was like ‘damn, this dude’s kinda cool’ and I just got really into him from there.”