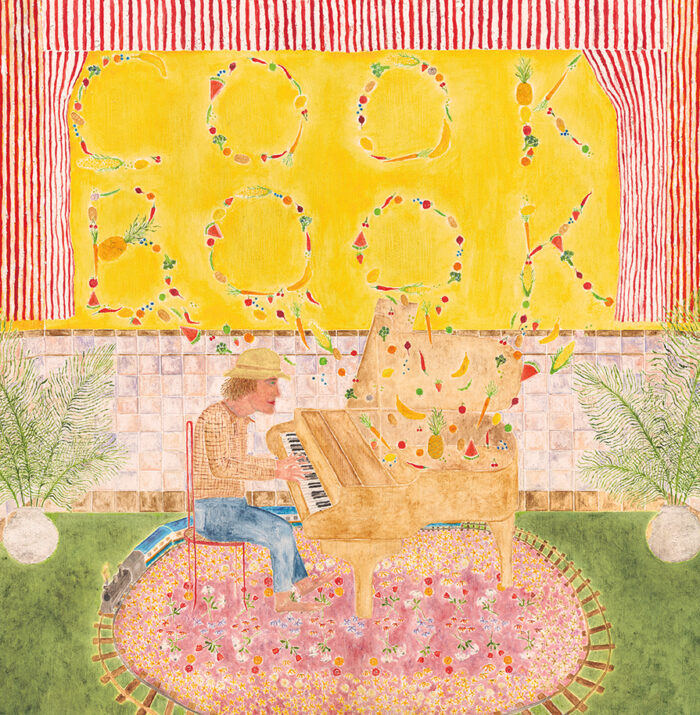 I’m a deeply shallow book-buyer. Sure, I will almost always read the interior flap or the backside of a paperback to get some sense of plot and prose, but ultimately, what gets me to the checkout counter is the siren song of pale blues and mauves and yellows, a memoir’s artful black and white portrait, a collage of watercolor silhouettes and hand-drawn nature imagery, or some combination of those elements.

Sometimes this is also true when comes to new music, and this, admittedly, is the case for John Andrews and The Yawns’ latest musical endeavor, Cookbook. Here, the cover is a view of an illustrated Andrews sitting at a piano that’s spouting bananas and corn and watermelon, carrots and broccoli, surrounded by a room colored in faded shades of pink and red and green. It’s straight out of a crunchy granola 60’s guide for seventy five ways to cook quinoa — so, sign me up.

My introduction to John Andrews was via his presence in backing bands at 2019’s Woodsist Fest (playing with Hand Habits and more, if my memory serves me), and eventually the New Englander ended up in my Instagram feed. In addition to lending his musical talents in support of a multitude of bands (see also Cut Worms, Angel Olsen, Woods, and Purple Mountains) and being a protagonist-ic force in his local music community and its national projections, Andrews’ is a gifted illustrator and animator. His quirky short films show gruff and mischievous characters doing menial tasks, a painted earth spinning on its axis, moving portraits of the late country and blues luminary Lightning Hopkins, etc. Naturally, Andrews drew Cookbook’s cover, which Andrews sketched and then commissioned fully from LA artist Greg Hartunian, is a perfect window into Andrews as an artist. Andrews’ art has a uniquely homegrown and handmade quality, and the relativity of his work in one form to the next contributes to some mythic world building.

Cookbook, Andrews’ third release with The Yawns, is soulful, impressively mellow and full of heart. John’s mom wrote the bio for the record, proclaiming that “this is a dyed-in-the-wool Yawns record, refreshingly straightforward yet full of character,” and her observations are spot on, including this line: “have you ever seen that painting of dogs playing poker? It might as well be what they were listening to as the bulldog pushed his chips forward.” Cookbook is the ultimate turntable classic — a new old-reliable with mid century sensibilities, unchallenging in the best way.

Album opener “New California Blue,” an ode to Joni Mitchell, grooves and soothes with a little Laurel Canyon flute whimsy, while “River of Doubt” is a standout with it’s sunny melodic turns, rhythmic intrigue, retro keys and reflections on the shifting seasons of our own disposition. Andrews’ lyricism is measured and thoughtful, finding sentimentality and relatability without too much abstraction. There are many moments where Andrews’ compositional approach on piano feels adjacent to Carole King, and the record often feels like a modern interpretation of its inspirations (perhaps the Mamas and the Papas, Canned Heat, The Band, Allman Brothers), though it’s free from any stuffy nostalgia. “Easy Going,” a sweet-as-pie tune about a tituarly uncomplicated love, is a prime example of this timelessness.

Sure, you could stream this record, but you should probably just buy it on vinyl and spin it at golden hour while you cook up dinner.