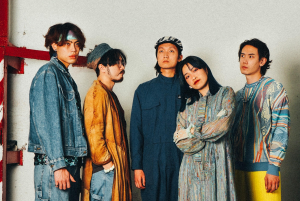 Hong Kong based Lucid Express are a musing culmination of shoegaze and indie-pop. For the past seven years, the dream pop outfit has traversed through airy textures and a soft balance of vivid soundscapes— transporting the listener to somewhere brighter than reality stands. Since the group’s inception, there has been an incredibly bleak social and political atmosphere in Hong Kong regarding violent suppression of pro-democracy protests and the punishing of dissident voices among a plethora of other issues. Their determination and verve to create music feels like a temporary escape from the turmoil that bubbles around them, giving rise to a group that exudes a hazy, rose-colored existence.

Today, they’re dropping their highly anticipated lead single “Wellwave” ahead of their feverish, self-titled debut album dropping on July 16th through Kanine Records. If anything, “Wellwave” embodies the musical journey of Lucid Express. Within its weaves of warmth and a dazzling dream-pop sound, the track swells with light, summer-sweet undertones. It’s spotlight falls on the dusk of shoegaze and ethereal vocals. The guitars shimmer while the drums melt into a mesmerizing atmosphere that feels like the soundtrack to any liminal space.

The music video falls back on the blurs and retro of chill-wave as it is filmed through a VHS lens, all hazy lines and oversaturated colors. It shows the band performing the single while also skipping around to calming clips of fish swimming and the group trekking through a lush-green environment. There’s definitely a dream-state that is established within the video’s universe, acting like a cloudy yet soothing dimension we’d all like to dip our toes into once in a while. It’s the perfect accompaniment to the single as it becomes the visual representation of “Wellwave’s” soundscape.

You can listen to “Wellwave” now, and pre-order/save Lucid Express’ self-titled debut out July 16th here.