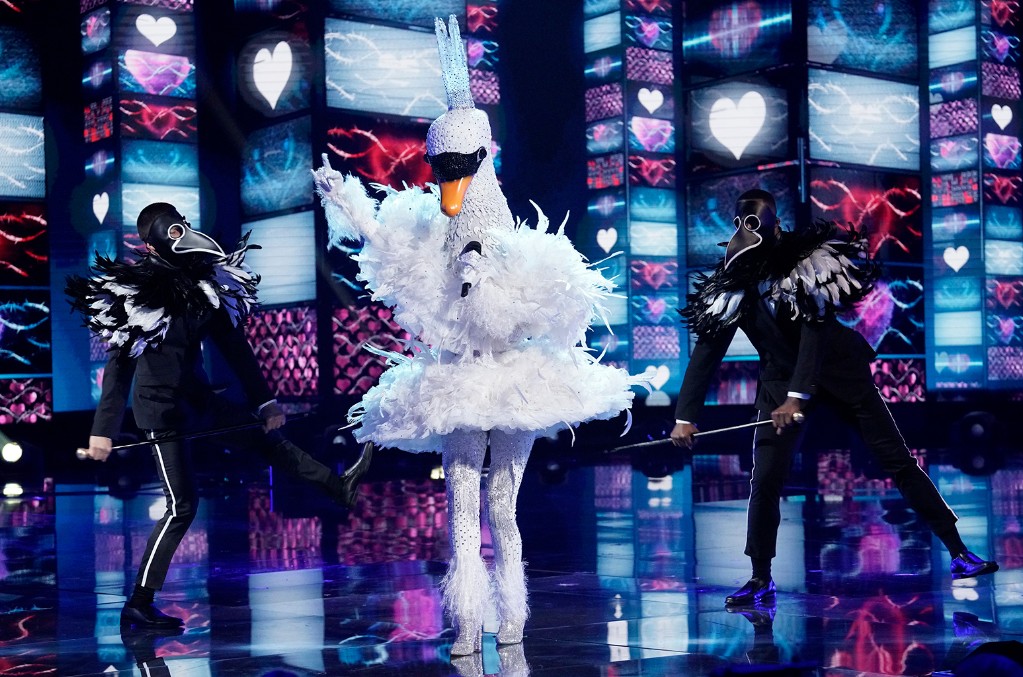 [Spoiler alert: This story contains the identity of the eliminated contestant on Wednesday night’s (March 18) The Masked Singer.]

The Masked Singer is exactly what the world needs now. It’s precisely the kind of goofy, mindless entertainment that can ease minds as America, and the world, huddle up in their homes around screens in search of distraction from the endless string of coronavirus updates. Forget about the pandemic for an hour or two and watch a former child star and singer/actress/dancer/professional provocateur swoon around in a Swan costume singing hits by Peggy Lee (“Fever”) and Joan Jett (“I Hate Myself for Loving You”).

Besides, after last week’s jaw-dropper — in which former Alaska governor and Republican vice-presidential candidate Sarah Palin “rapped” her way through “Baby’s Got Back” — what shock could possibly be left? A big one, as it turns out. The star with the low-register voice was not, as the judges guessed, Sarah Michell Gellar, Mila Kunis, Kristen Stewart or, as always-off Ken Jeong guessed, someone he’s worked with like Kristen Bell (or Sandra Bullock).

Nope, it was none other than Assassination Nation star Bella Thorne, 22, who, by the way, is planning to release two albums this year. Billboard spoke to Thorne before her elimination about why her voice is the one you need to hear right now, why Masked Singer is the perfect show for our social-distancing times and why she dedicated her Joan Jett performance to Jeong, who is always wrong.

You’ve done plenty of wacky things in your career, but is it safe to say this is right up there?

Why this show? What appealed to you about it?

I think, one, I’m really scared to sing in front of people. It’s definitely super scary to me and my album is no Auto-Tune, no touch-ups here, that’s what it’s really made of, and I definitely want to be one of the first artists to put that on the platform and say, “Hey, I’m an all-natural bi—.” Just because you don’t sing like every pop star that has a perfect voice doesn’t mean you can’t sing. I wanted to introduce a new voice to pop even though none of the music on my album is really that pop. I wanted to let girls know that they don’t have to have the lightest-pitched voice that’s so girly-girly and light. They can have a deeper-set voice like mine and still sound pretty singing ballads. One of my main things was to really show people… I don’t think anyone is gonna believe me when they hear my album and they hear that it’s no Auto-Tune, no any of this. Hopefully they really do believe me because it’s like, “Guys, c’mon there’s a bunch of sh– on there that’s really not perfect, where my notes are… I’m a little sharp, or I’m a little flat or not hitting it or things like that that were maybe not on purpose.” It’s like, “C’mon guys!” The other main reason to do it was if people hear my voice on this and hear that that’s the same exact voice on my album and they know I’m singing live, they know I don’t have a choice, then people will start to be like, “Oh, that really is Bella Thorne’s voice!”

When is your album supposed to come out?

I’ve had the worst luck with producers and getting my music… I have two albums almost ready, summer and fall. I could drop two this year and I kind of like doing that sh–. I like dropping more than what people need and overflowing your plate, so you’re like, “No way, Bella Thorne’s been working on music, she dropped two albums in one year.”

You said in the clue package you were there to “ruffle feathers.” So did you?

What was with the Alice in Wonderland, moons and rainbows clues?

I think they were hinting at my trippy house. My other house, me and my sister, we really did it up from top to bottom. Whereas we’re doing my house right now, I can see my sister gluing up vines in the other room. But we make it so if you go look at my house on Instagram… all those clues were about [how] I’m such a big glitter fiend. There’s this huge rainbow in my house, there’s a f—ing light-up dinosaur, a f—ing huge unicorn.

It must feel pretty good to outlast a former vice-presidential candidate, no?

[Laughs] Um… you can go on that show and have any voice, that’s the beauty of that show: They appreciate your voice no matter what it sounds like. But I think the show is… it’s The Masked Singer. You want to hear singers. That’s the only thing about having me on it because I’m about to become known wide as a singer. People don’t know me as that, so that makes sense. But in general it’s like, “Huh, you’re singing against a bunch of beautiful-ass singers who have trained voices and whatnot.” I almost think that I’d do better on The Masked Dancer.

Well, that perfectly segues to my super awkward next question. How do I say this without being weird? It seems like the Swan made the most of your long legs, with tons of high kicks and most of the costume up top. That led to the panel suspecting you’ve had dance training, though I read that you had never really danced before Shake It Up.

Yes, I learned how to dance on Shake It Up. I had two left feet and I was the worst dancer you had ever seen. I used to cry leaving the studio because of how embarrassing it was.

But on the show you really seemed to showcase and embrace your inner-dancer.

Thank you. I actually had learned a lot more dance routines before I went onstage. Like a lot of dance routines. Because I can do it and the choreographer was so sweet, she was like, “Oh my God, I have a dancer! This is insane, I can actually give you so much dancing!” And she gave me so much dancing and then on the day of I was like, “F— that! I’m way too scared to be f—ing out there dancing hella and worrying about my voice and I’m singing out of my eyeholes, I can’t even breathe. Uh-uh, no, bro, I’m sorry.” Literally 20 minutes before I walked onstage I was like, “I can’t do the routine… I can’t. I’ll do these parts, but I can’t do the whole f—ing thing because I’m too nervous.”

Your choice of songs was interesting and diverse, with the common thread of two strong female voices.

Yes! Exactly! Both very strong women with strong voices. I also think too much of the time our general audience tells us that the box is this high, it’s about this much wide and they just tell us [that] over and over and over. But when you listen to music, people usually ask you, “What kind of music are you into?” And you’re like, “Oh, well, I’m into this… but I like that too.” But of course everybody has to make it fit into a box. So you like indie pop, or you like rock, so that’s about it.

Did anyone in your world know it was you and try to get you to admit it?

No! No one still has guessed it’s me, which I think is pretty crazy.

The world has definitely changed dramatically since you taped the show. Everybody is on lockdown now. What do you think The Masked Singer can do for people quarantined at home to lift their spirits?

I think that the best thing… oh my God, did you see that Trump just suspended evictions? Yeah!… Amazing. Thank God!… Corona is changing the world! I think that the best thing besides obviously washing your hands, staying safe, social distancing and whatnot… it’s great to watch The Masked Singer. Because The Masked Singer is so fun and such a level of realness but also level of fairness and wonderment and imagination that you can really buy into. I think the more you watch it, the more addicting it becomes. You’re like, “Damn! I’m really f—ing watching this show right now!” And like you said, it’s really the perfect thing to bring light and joy to people right now.

The guesses were totally all over the place, but also kind of not: Nina Dobrev, Jennifer Love Hewitt, Sarah Michelle Gellar, Kristen Bell. But Kristen Stewart and Sandra Bullock seemed wildly off-base. What did you think of the guesses?

I really liked the Kristen Stewart guess, because I f—ing love Kristen Stewart and it makes sense because our voices are in that same octave range. So that one made sense to me. But the other ones I was like, “Huh, OK, interesting.”

What was with all the Ken Jeong flirting and pictures of him during the Joan Jett song? Was that a strategy? Why did you dedicate the performance to someone who is always, always very wrong?

Because everyone is mean to him on the show and I don’t like that! He didn’t get a valentine, nobody ever agrees with him, he makes the worst guesses and everyone always picks on him all the time. I was like, “Oh, I love Ken.” He’s the show’s pariah, so I wanted to throw Ken some love.

You are part of the Fox family now with the announcement of your development deal today. What do you hope to do as part of that?

It’s scripted and non-scripted, so for scripted I definitely want to bring them a huge teen-leaning fanbase show. Something that’s dark and psychological and on-the-nose that really captures what we’re going through right now… not corona, but what is going on with teens every day. For Fox to take a chance on me and for once for a network to give someone my age a chance to talk to people my age, that, to me, is a beautiful thing. Thank you so much, Fox. And for all the kids out there who feel like TV shows don’t really capture what they’re going through well and it doesn’t paint a great photo of what they’re going through well, that’s what I want to do. I’m looking for that show, writing up treatments and whatnot, reading books to see what would be interesting to turn into a TV show. For the non-scripted format I have a few treatments already written out and I definitely like doing things that relate to us growing up. They’re in my history,  so it feels like it would be really dope to make a fun, Masked Singer type of show that has all these crazy things behind it, but make it something related to what I’ve got to say.