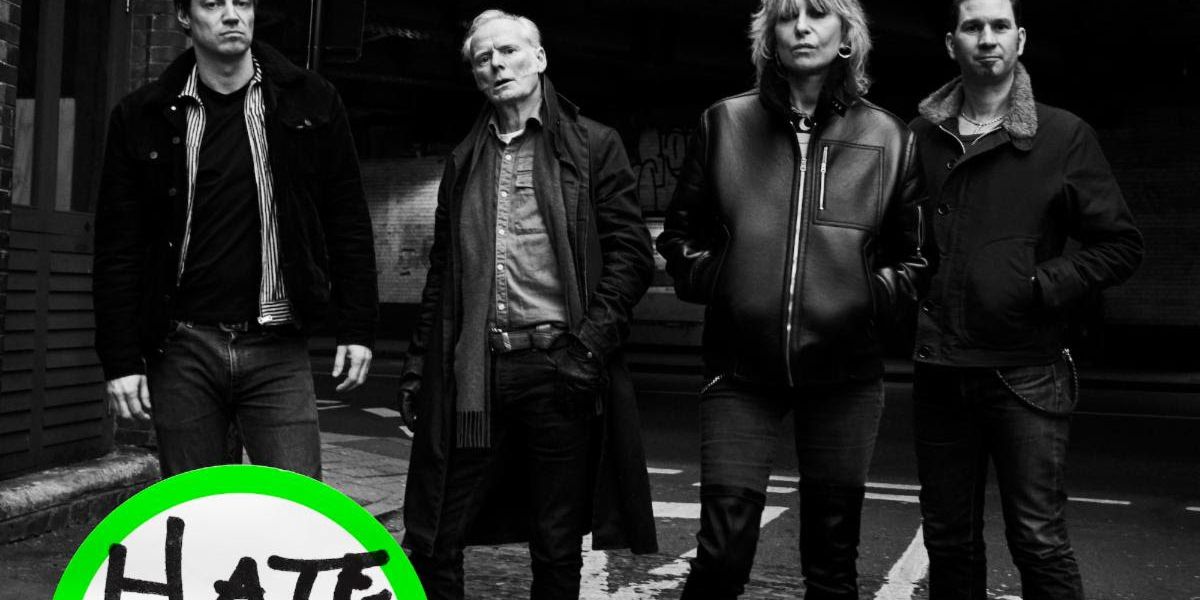 The Pretenders’ 11th studio album, Hate For Sale, is a return to their musical base. Rejecting the overly adorned styling of their 2016 release, Alone, Hate For Sale emphasizes the same raw and decluttered approach apparent throughout the Pretender’s 40-year course. Predominantly written by Chrissie Hynde and guitarist James Walbourne, Hate For Sale resembles a retrospective. The album returns the Pretenders to the signature sound encompassing their musical expanse while laying the foundation for Hynde’s recognizable vocals. Whereas Hate for Sale is a daring attempt to resurrect their glory days, they do so without committing, rendering a diluted product.

The title track opens with a failed count-in, finding the Pretenders inaugurating the album with a distinct punk sentiment. Indeed, the redoubled count-in enshrines the flawed, albeit, the enthusiastic ethos of 1970s punk rock. Hynde’s vocals are as brusque and sardonic as the instrumentation is powerful. The track takes issue with a man so blinded by his privilege he “He won’t get hung or go to jail / He’s got a curly tongue and a curly tail / But mostly he has hate for sale.” The Pretenders’ takedown of toxic-masculinity is symbolic of Hynde’s position in rock ‘n’ roll: she’s been monumental since the advent of her career.

The London punk scene was vitally influential to Hynde. In addition to the title track, smatterings of punk permeate the album. Martin Chambers’ drumming in “I Don’t Know When to Stop” is as iconic as it is boisterous. The Pretenders’ awareness is keen, as the inclusion of a harmonica prevents the track from becoming reiterative. This energy is turned down in “I Didn’t Want to Be This Lonely” to channel a decisive garage band sound without adopting the genre’s optimism. When Hynde sneers, “Though losing you was a relief / From a life with one man only / Devoid of morals or belief”, the edginess is evident. With Hynde’s spectacular guitar solo, the distinction between garage band and punk rock blurs. In doing so, the Pretenders effectively portray the distinctive qualities of their influences then hone the musical overlaps.

As such, Hate For Sale also pays homage to the Pretenders’ roots in reggae and new wave. “Lightning Man” is unquestionably influenced by reggae. Its heady tempo deliberately slows the pace to make room for more harmony. “Turf Accountant Daddy’s” hardscrabble guitars are mediated by synths. Here, the Pretenders recreate the point when punk rock and pop music clashed, then created the 1980s new wave. It commendable the Pretenders have remained attuned to their musical bedrock. Yet these two tracks, in particular, are light in their delivery. The two songs never fully embrace reggae or new wave. They flitter around without concretizing the genre’s or the Pretenders’ fundamentals. Both songs are noticeably restrained. Reticence is the antithesis of the band’s credo but apparent through Hate For Sale.

Bass player, Nick Wilkinson’s magnetism is emphasized in “Junkie Walk”. Contextualizing addiction, “Junkie Walk” is adamantine, verging on callous. Hynde critiques addiction, never finding empathy, thereby matching the steely instrumentation. Overt drug references appear throughout Hate For Sale. Despite the love is a drug-addiction comparison being an overwrought cliché, “The Buzz” is the standout track. Entirely due to Hynde’s vocals, she maintains an astute vocality relying on cunning storytelling. Reflective of 1979’s “Kid”, Hynde’s vocals are aching in their tenderness while remaining assertive. Especially when Hynde sings, “But you’re hypnotized and follow / The puppet master’s voice”, it becomes clear her lyrics are slyer than a simple portrait of the love-lorn.

“Crying in Public” is the album’s weakest moment. Despite Hate For Sale’s adroit emotional exploration, specifically on the reflective “You Can’t Hurt A Fool”, “Crying in Public” is laden with self-pity. Whereas the former is lyrically affirming, the latter is self-pitying. “You Can’t Hurt a Fool” finds Hynde offering wisdom that at once acknowledges her flaws, but also her empowerment: “You can’t hurt a fool / So don’t even try / Because genuine fools / Don’t play by the rules.” “Crying in Public’s” wallowing is cringe-worthy and indulgent, sounding more like Morrissey than rock-icon Hynde. Perhaps this is the influence of producer Stephen Street, known for his work with the Smiths and Morrissey. Much as the questionably outspoken lead man, Hynde also shows her disconnect with contemporary social awareness. She criticizes the women’s movement, suggesting, “Feminists claim that we’re all the same / But I don’t know a man who’s felt the same shame.” The reductionist understanding is problematic and suggests the Pretenders’ are out-of-touch.