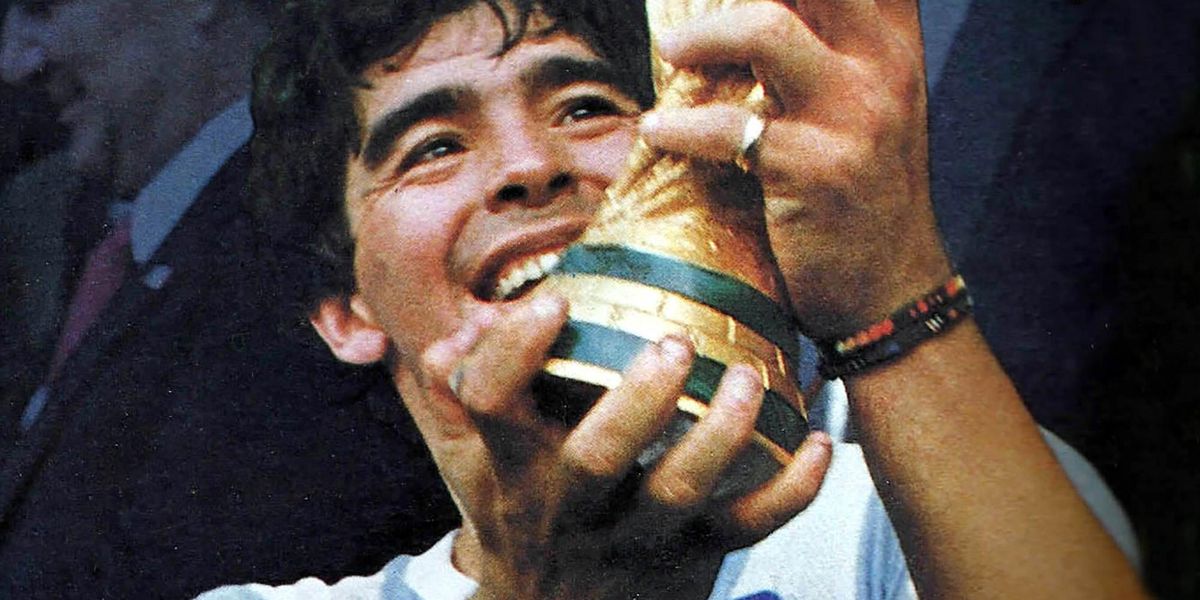 There are some who confer beatitude – or, at the very least, that quality that the Argentine fabulist Jorge Luis Borges called everness – simply by touch. In Christian iconography, the Lactation of St Bernard is a miracle experienced by Bernard of Clairvaux, a 12th century abbot who is one of Dante’s guides in the Divine Comedy. When Bernard kneels at a statue of the Nursing Madonna, Mary springs to life and squeezes out a spectacular squirt of breast milk, which shoots into the praying abbot’s mouth. It is a miracle, after all, and Bernard becomes a saint.

In the profoundly religious and deeply gustatory city of Naples, you are as likely to find a Maradona Pizza on a café menu as you are to encounter an image of Maradona as the Madonna, for
Diego Armando Maradona could bestow eternity merely by touch. Why else would anyone remember Andoni Goikoetxea – Athletic’s middling centre-back who was sacked as the coach of Equatorial Guinea three weeks before the Africa Cup of Nations in 2015 for “poor performance” – if not for his sedulous contact with divinity one September evening in 1983? In committing what the biographer Jimmy Burns called “one of the most brutal fouls ever delivered,” Goikoetxea tore into the divine left ankle of Diego Maradona and ascended into legend, immortalised forever as the ‘Butcher of Bilbao’ by the English football journalist Edward Owen, who witnessed this most profound of touches that fateful day. Goikoetxea reportedly keeps the boot he wore to destroy Maradona’s tendons in a glass case at home.

For some, it is breast milk. For others, it is footwear. In either case, you will never be forgotten, for you have touched God.

For almost five decades, from the ramshackle neighbourhoods of Naples’ Spanish Quarters to the barrios of Buenos Aires, God –El Dios – was a curly-haired runty little kid born into poverty and magic. “Maradona,” said the art critic Vittorio Sgarbi when he curated an exhibition called the ‘Museum of Madness: From Goya to Maradona’ at the 1,500-year-old Santa Maria Maggiore della Pietrasanta in central Naples, “is the 20th-century Caravaggio, a genius of good and evil who made everyone mad about him.” Radiographs of Maradona’s feet were hung in one of the galleries, his manglings and excruciations exposed to all.

“It is not a stretch. The faces of Caravaggio are the children of life, of the streets, of the peripheries of humanity. His works show pain and divine, light and dark, sin and redemption at the same time.” In both Maradona and Caravaggio, Sgarbi finds existence passing “through an abyss that does not sanctify.”

But Maradona’s touch consecrates, which is why he leaves so many relics in his wake. The miraculous hair of Diego Maradona in his shrine at the Bar Nilo in Naples, where he clearly outranks the Pope; the fake penis he used to evade drug testers put on display in a Buenos Aires museum and promptly pinched; the prawn shells that were part of a salad he ate at the Hotel Blue Nile in Kerala, freeze-dried and framed. The supernatural refuses to let go of him, and you can see the paradoxes of Latin America – what the Cuban novelist Alejo Carpentier called lo real maravilloso, the continent’s marvellous reality – oozing out of his squat, solid body both on and off a football pitch.

In that fine tradition of Latin American culture, Maradona was nothing if not a magical realist. Unconcerned with good and evil, he embodied that ancient connection between children and godliness – he was El Pibe de Oro, the scruffy urchin of Argentine legend with feet of gold made famous in the tangos of Reinaldo Yiso, and he was El Dios, morphing for ever Naples’ patron saint, Gennaro, into San Gennarmando. Of mixed race – frequently taunted as a “half-breed” in many enemy arenas – the son of an indigenous Guarani father and a mother of impoverished Italian descent (in Argentina, this would make him Black), he relapsed into greatness in Napoli, a third world city in southern Italy excoriated by the more prosperous north. And he was loved and hated for the same thing – “the sin”, as the great Uruguayan writer Eduardo Galeano put it, “of being the best.”

Among other wonders, these: five foot five on a good day, piling on the spaghetti, meandering into fatness, snorting cocaine blue in the face, guzzling champagne from cockleshell baths, missing practice, turning up late, scoring goals of the century (at whim), scoring goals with his hand (out of spite), possessor and agent of the most sinister foot in all sport (sinister, Latin for left, after all). Obviously, there was witchcraft involved. How else to explain a footballer whose natural setting was a combination of the nightmarescapes of Hieronymus Bosch and the frame of a pietà?

Diego Maradona while playing for the “Cebollitas” team at Torneos Evita of Argentina. ( Wikipedia / Public Domain)

For make no mistake, few have wept so frequently and so flagrantly as Diego Maradona, even as he convulsed himself and those around him onto the threshold of chaos. There were allegations of domestic abuse, gluttonous samplings of banned substances, dalliances with the Camorra and barely-acknowledged bastards, and Diego wept through them all. His tears flowed on football fields and neon-lit television talk shows, in the stands and on the streets (to say nothing of nystagmic frothings in VIP boxes, like when he watched Argentina play Nigeria at the 2018 World Cup). Supervising the quivering rapture, there he would stand, sobbing, snivelling, all a-blubber – Our Maradona of the Lachrymae.

“For Maradona,” writes the Mexican chronicler Juan Villoro, “teardrops are like punctuation marks, and weeping disconsolately is a way to break up chapters.” For the rest of us, they are our own graze of the eternal. In a recent and beautiful article, Rudraneil Sengupta describes watching a videotape of Mexico 1986 and crying with Maradona as he lifted the World Cup, “as if it were happening live.” With Diego, it is always live. What matters time if you can never be forgotten?

Sengupta’s viewing of Italia ’90 was live in our more mortal sense, “and again, there were tears.” The relentless onslaught of the executioners of the fibula is heavier than individual genius, and Maradona ended that World Cup, as he had the previous two, more fouled than anyone else. But he knew it was inevitable; when you play “voodoo football”, as the journalist Ed Vulliamy described it, you must expect the exorcisms, and Maradona “accepted the role,” in Villoro’s memorable phrase, “of the twentieth century’s most publicly kicked man.”

And the English call him unsporting.

“Soccer,” said Borges, who famously despised it, “is one of England’s biggest crimes.” (He also said – “Soccer is popular because stupidity is popular”). As a colonial sport, it was frequently used to force European ideas of hierarchy, discipline, and white superiority down brown and black gullets; once adopted by the colonized, though, it became a potent space for indigenous resistance. In Zanzibar in the first half of the 20th century, the prejudices of foreign referees became the focal point for local teams boycotting the league; in the Calcutta of the British Raj, playing barefoot against colonial teams (and beating them) became a point of nationalist pride for fans of teams like Mohun Bagan and East Bengal.

Enter, into this state of affairs, cheating, illegality, and la mano de Dios.

In Rosario – birthplace of stars ( Libertad Lamarque), comets (Che Guevara) and meteorites (Lionel Messi) – the Iglesia Maradoniana (Church of Maradona) baptises new members by making them re-enact the Hand of God. Women, children, and men must score a goal with their left fist, as Diego did against the hapless English team in 1986, with delight and joy; they are then anointed with holy water from a plastic jerry can that reads “Arg 1-0 Brasil”, the final score of that classic game from Italia ’90. For Argentinians, and for those of us from continents with open veins, the Hand of God is the Empire punching back. It might have been a foul, but, after all the colonies and the wars, was it really unfair?

“A football stadium,” said Cesar Luis Menotti, who coached Argentina to World Cup gold in 1978 and was forever resented by Maradona for not including him in that squad, “is the only place where I like to be deceived.” In 1986, in the ancient Aztec capital of Mexico City, Diego Maradona performed the fine art of deception on flummoxed English players not once (the Hand of God), but twice (the Goal of the Century), legality and illegality be damned. To this day, it is a collective haunting of the national English consciousness. The English are the only people in the world still uncertain of the divinity of El Diego.

The unholy intercourse of the divine and the ridiculous made one final exhibition in Mexico. In September 2018, Maradona went to Culiacán – the capital of the Free and Sovereign State of Sinaloa and the global capital of nose candy, home to the dread Sinaloa Cartel of El Chapo – to coach Dorados de Sinaloa, a team at the very bottom of the 2nd division, about to be relegated to the 3rd. He was there for less than two seasons, inspiring a squad made primarily of the sons of pre-industrial peasants (much like himself), through the sheer charisma of his presence. And just as he did with Naples in the ’80s, he forged a connection with a city overflowing with bad press, “a city that people thought would get him back into bad habits,” as Ocyé Leal, the press secretary for Dorados, says in Maradona en Sinaloa, a remarkable docuseries released last year on Netflix. “I believe,” she continues, “that Culiacán is saving Maradona in an unimaginable way.”

In Sinaloa, there is a rumour that El Chapo Guzmán has broken out of prison, just so he can watch Dorados beat Atletico San Luis in the final for promotion to the 1 st division. Maradona invades Atletico’s technical area near the end of the game and gets sent off. Inside the unfinished stadium, a banner is unfurled – Que Locura Más Hermosa, What A Beautiful Madness!

But not even a city can keep a god alive. Naples couldn’t, and neither does Culiacán. So he is laid to rest, finally, in Buenos Aires, a city that exists in the dithering gap between the crystalline edifices of Borges, who did not believe in God (”
It is better that He should not exist; if He did He would be responsible for everything. And this world is often atrocious, besides being splendid”) and the brittle slave rebellions of Diego Armando Maradona, who, without the shadow of a doubt, existed.

Maradona (right) and Lionel Messi in The Sistine Chapel of Football painting, on a ceiling of a sports club in Barracas, Buenos Aires (Photo: Juano Tesone / CC BY-SA 4.0 / Wikipedia)

Sengupta, Rudraneil. ”
To see the ball, to run after it, makes me the happiest man in the world: Maradona the protagonist”. Hindustan Times. 27 November 2020.

Shilton, Peter.
“Diego Maradona had greatness, but no sportsmanship… He never apologised for cheating England in the World Cup quarter-final, instead he used his ‘Hand of God’ line”,.The Daily Mail. 25 November 2020.

Vulliamy, Ed.
“Maradona and Naples created an unearthly and sometimes dark magic. I was there”. The Guardian. 7 June 2019.