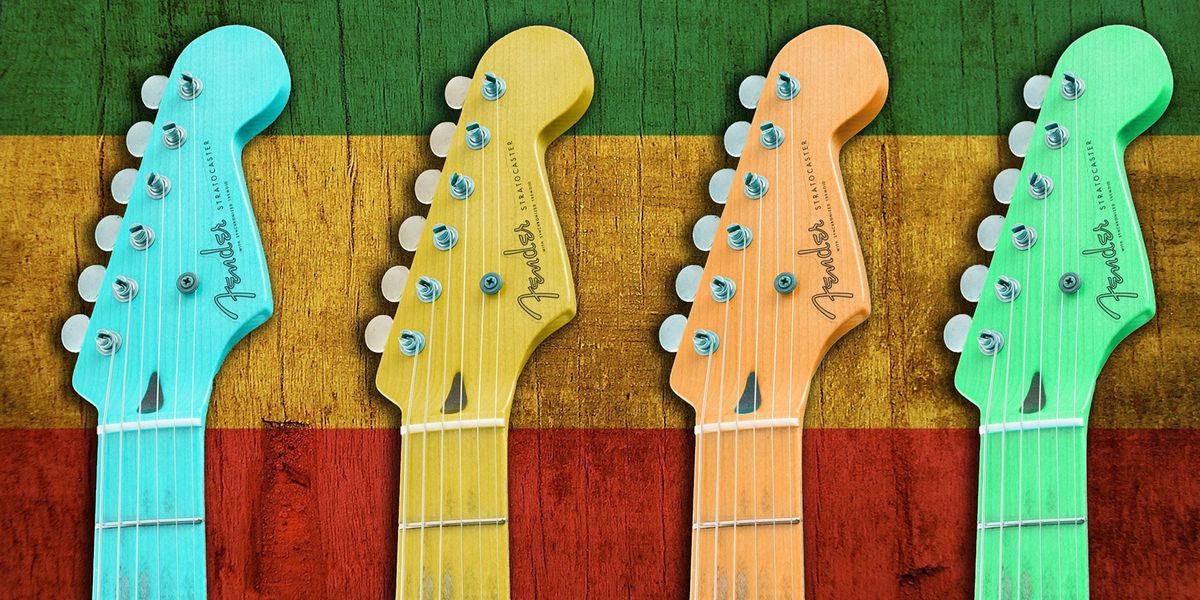 In Jamaica reggae came after ska; conversely, when hybridizing with punk in late 1970s Britain this historical succession was reversed. The main appeal of reggae to the primary punk bands had been that it represented the rebel sound of urban life. However, that genre’s Rastafarian spiritual foundations could never be reconciled with punk’s secular humanist orientation, despite the efforts of bands like the Ruts to integrate terms like “Jah” and “Babylon” into their otherwise white working-class London vernacular.

Although revered for being “outsider” music, reggae was too outside for most punk bands and fans, such that its adoption often seemed forced or ill-fitting. Punk-reggae couplings were sometimes rocky, too, when practiced by artists incapable of capturing reggae’s lilting rhythms. Played by Stiff Little Fingers, the Members, and the Police, reggae was processed on a punk/new wave production line, the resulting hybrid emerging as faster and more pop-oriented. Accidentally it came out sounding more ska than reggae.

Such a serendipitous result didn’t go unnoticed by various punk groups that came to realize that Jamaican ska made for a more natural musical partner than Jamaican reggae. Blazing the trail into the deeper roots of Caribbean culture were the Clash, the band most responsible for having developed the punk-reggae hybrid. Their historical foraging in the year leading up to London Calling (1979) led the band into discovering many rebel rock genres ripe for punk picking. One of these was ska. Songs on that album like “Rudie Can’t Fail”, “Revolution Rock”, and “Wrong ‘Em Boyo” indicate that the band’s prior efforts at replicating reggae grooves—best achieved in “Armagideon Time” (1979)—had been put on pause in favor of an up-tempo style more aligned to punk’s urgent energies.

As with reggae, the Clash embraced ska with respect for its traditions but also for its potential to be used as “Clash” material. “Rudie Can’t Fail” was tailor-made, its story of a rude boy that rebels by nature against his elders fitting snugly within the band’s (self-)mythologies of youth dissent. As with “Revolution Rock”, the band put the stamp of ska on “Rudie” by adding jaunty horn segments, creating what MOJO editor Pat Gilbert calls “whooping, summer-street-party songs” (p.259).

Also embodying the band’s new “boisterous ska-punk spirit” was their cover of the Rulers’ 1967 song, “Wrong ‘Em Boyo” (p.239). Rather than copying that band’s slow piano version, though, the Clash dipped deeper into ska history, into its original roots in New Orleans rhythm and blues. Their rendition, based primarily on Lloyd Price’s 1958 hit, “Stagger Lee”, throws in the horn hook from Frankie Ford’s “Sea Cruise” (1959) for good measure, combining two New Orleans rather than Jamaican sources. The end product serves as a history lesson on how ’50s American R&B begot ’60s Jamaican ska, which, in turn, begot ’70s British ska-punk.

While doing their homework on the roots of ska music, the Clash noticed that they were not alone in finding fascination with this seemingly lost punk-friendly genre. From the Midlands the Special AKA (later the Specials) were developing a ska-punk sound of their own. Like the Clash, this posse of rude boy wannabes had previously made attempts at creating a punk-reggae hybrid but had abandoned them due to lack of success at integrating the two styles. Seeing these kindred ska-punk upstarts, the Clash invited them to open up on their 1978 “On Parole” tour, introducing the Coventry mentees to large punk audiences, and those audiences to the “new” ska sound.

The Clash’s manager, Bernie Rhodes, also saw the potential in the Special AKA, taking them on board under his managerial tutelage, a relationship that would end with the band mocking the impresario’s controlling ways on their debut single, “Gangsters” (1979). Despite some early teething problems, the Clash-Special AKA meeting of minds proved fruitful, the former paving the way for ska-punk and the latter completing the process of developing what would become punk’s most commercially successful musical crossover.

The reasons for this breakthrough accomplishment have as much to do with the punk nature of Britain’s “second wave” ska bands as with the music they adopted and adapted. Fiercely independent, the story of ska-punk is also the story of 2-Tone Records, the label founded by the Specials’ Jerry Dammers that initially housed the genre’s leading upstarts: the Specials, the Selector, the Beat, and Madness. That label, and the philosophy of racial unity shared by all its bands, was significant in providing—as Rock Against Racism (RAR) had—a rebuttal to the racism on the rise at the close of the decade. Harnessing the ethos of social concern and confrontation punk had set in motion three years earlier, 2-Tone and its bands offered what critic Simon Reynolds calls “a snapshot of Britain in 1979” (p.228).

As post-punk drifted in often obtuse, esoteric, or incomprehensible political directions, ska-punk kept punk politics down-to-earth and direct, its messages clear and uncompromising. And although ska’s often “nutty” sensibility and comedic fun seemed at odds with the disturbing political climate and angry vibe of punk, as noted, the ska-punk merger made more sense than the preceding punk-reggae one had. Ska had, assesses author Heather Augustyn, “a tempo more akin to punk, a similar energy, a similar message” (p.72).

The user-friendly qualities 2-Tone bands found in ska had been there since the earliest years of the genre. Like punk, ska began as the sound of freedom, arising as a home-produced product around the time of Jamaica’s independence in 1962. Unlike punk, that free spirit was expressed as hope or escapism more than resistance, though the latter was never absent. “Independent Jamaica” by Lord Creator and “Forward March” by Derrick Morgan celebrated the nation’s new-found freedom in 1962 with words of optimism for a positive future.

Innocuous as their affirmative messages were, still, official Jamaica largely scorned the new music, dismissing its repetitious features as monotonous and unimaginative, charges commonly leveled against punk rock over a decade later. Jamaican gentile society also regarded ska as lowbrow music, the primitive fodder of the working class, again as punk would also be characterized. And just as the establishment recording industry and society reacted to punk by producing a kinder, gentler product in new wave, so the Jamaican tourist industry shopped the commercial face of ska, Byron Lee, rather than the more street-popular Skatalites, to sell a positive image of the new nation. Lee’s sound had a spit and polish absent from most early ska recordings, which had a rougher quality due to the artists seeking a live rather than studio sound. For them, muffled vocals low in the mix or an error-strewn instrument were accepted as the sounds of spontaneity and (a)live emotions rather than as recording flaws.

Comparisons with later punk can be found in the nuts and bolts of the songs, too, particularly in the vocals where chants of “ska-ska-ska” and “get up-get up” were more prized than vocal melisma or melodic precision. Modifying the jive talk and scat singing they had heard on New Orleans jazz imports, these early practitioners of toasting laid the rhythmic foundations of voice usage that would wind their way into the later non-singing chants of ska-punk and rhyming flow of rap music.

Those vocal interjections of “ska-ska-ska” also referenced the onomatopoeia of the genre’s name itself. “Ska” both named the style and described it, the word capturing the emphasis on the off-beat that would distinguish not only ska, but the rock steady, reggae, and lovers rock that would inherit the rhythm. This, in turn, was derived from earlier New Orleans boogie-woogie artists like Fats Domino and Lloyd Price. Fats had released a song called “Be My Guest” in 1959, which reached Jamaica via the strong radio signals transmitted from New Orleans.

This song featured all the hallmarks of what would become ska, and soon Jamaican acts were declaring their own musical independence by producing their own more rough-hewed adaptations. One such homemade song was “Easy Snappin” by Theophilus Beckford, released the same year as “Be My Guest”, and featuring on trombone Rico Rodriguez, who would later perform as the elder statesman with ska-punk innovators the Specials.

Rico’s road from playing with Beckford in Jamaica to the Specials in England is a familiar one for many musicians that sought better opportunities in the 1950s and ’60s. Labor shortages after the War had led to a temporary opening of the doors to mass immigration from the Commonwealth countries. The thousands of Jamaicans that landed in Britain during this period became known as the Windrush generation, named after the SS Empire Windrush that had brought the first boat-load over in 1948. Settled into labor-intensive working-class districts like Brixton in South London, these Caribbean settlers soon found an unforgiving environment of resentful racism, but also one that came to appreciate their cultural contributions.

By the mid-’60s first wave ska was being received by first wave British mods and skinheads in the same ways it would be over a decade later: as cool rebel music you can dance to. Desmond Dekker climbed up both the Jamaican and British charts in 1967 with his rude boy anthem “OO7 (Shanty Town)”, which even came with its own early promotional video showcasing Kingston ghetto life. Cuban-born Laurel Aitken had earned the moniker of the “Godfather of Ska” by the time he settled in Brixton. His songs about his new urban surroundings, “Hey Bartender” (1961), “Scandal in a Brixton Market” (1970), and “Skinhead” (1969), endeared him to the local youth subcultures. (“Everybody Suffering” (1969) even survived into the third wave of ska in the US when it was covered by Rancid in 2014).

A few white British musicians took a stab at ska, too, Georgie Fame reaching the top of the charts with “Yeh, Yeh” in 1965. This ska boom checked all the boxes for white as well as black youth—dance music, rebel themes, outsider culture, sharp clothes—despite the simmering racial tensions of the time.

The genre’s decline was perhaps inevitable for a style so ultimately one-dimensional in musical scope, but it was also the victim of emerging competition. In Jamaica ska productions dried up after Haile Selassie visited the island in 1966. He inspired the growing youth Rastafarian movement to develop a more spiritual sound. This, along with the heat wave of 1966, led to musicians developing the slower-paced grooves of what would be called rock steady, then reggae.

The popularity of soul singers from the US like Sam Cooke and Otis Redding also encouraged a more sophisticated vocal side to the music, where melody and emotion were favored over chants and shouts. The transition of Bob Marley’s Wailers from a ska to reggae group offers an illustrative example of the kind of musical changes taking place during this time in Jamaica. Ska would lie largely underground for the next decade-plus until it was rude-ly awakened by the 2-toners, a bunch of new generation British rebels revisiting the genre with the benefit of a recent tutelage in punk rock music.

Perhaps because of its overt socio-political content, second wave ska—in its heyday—made few inroads across the Atlantic where the record industry was more controlling of content and its dissemination. The most notable hit in the US was “Our House” (1982), a virtual novelty song from Madness’s otherwise culturally perceptive The Rise & Fall album. It was not until a decade after the insurgence of 1979 that the ska-punk hybrid finally found a footing in the US.

This third wave of ska, for aficionados, signaled that the form that had started in New Orleans had come home. Most were unaware of this, though, and took their musical cues from recent British reference points rather than deeper Jamaican or US ones. Nevertheless, US ska-punk became both a mainstream and indie force during the 1990s, a significant part of the broadening alternative culture being fostered by college radio. It was this wave, too, that explicitly recognized punk’s influence, the terms “ska-punk” and “ska-core” employed for the first time as common genre designations.