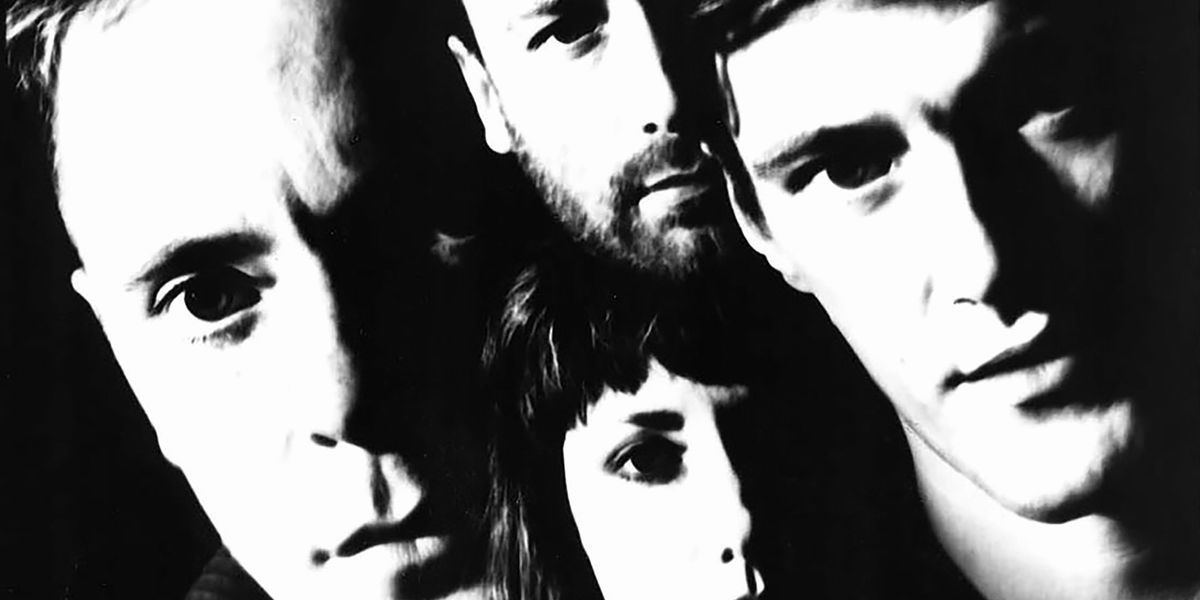 Bernard Sumner has claimed he never quite grew comfortable in the role of frontman, and nowhere is that uneasiness more gloriously apparent than “Face Up”. No, Sumner’s voice is nowhere near as distinctive or intuitively strong as Ian Curtis’, but he learned how to own his vocal performances. The chorus here shows Sumner belting out his silly, transparent lyrics — “Oh, how I cannot bear / The thought of you!” — with joyful abandon, placing a greater premium on the charismatic earnestness of his delivery than on, you know, hitting the notes properly. The results display one of New Order’s greatest strengths: even if Sumner isn’t a fantastic vocalist (or lyricist, as has been more routinely noted), his flaws bring a disarmingly human quality to New Order’s forceful, emotive, and often brittle music. “Face Up” could be a guilty pleasure, but the emphasis will always be on the latter.

One of New Order’s most popular songs, “True Faith” never appeared on a proper album. The band recorded it, along with “1963”, for the singles compilation Substance (1987). Substance is often viewed as New Order’s de facto greatest hits record, and “True Faith” holds its own among the impressive catalog of material there. The song offers a solid example of New Order’s blend of club music and pop-rock. The backing beat remains virtually unchanged throughout the song’s runtime, providing an insistent, hypnotic rhythm. Meanwhile, Sumner and the group craft a catchy pop song over the dry percussion, relying on interlocking synths to carry the singer’s understated vocals. In this way, “True Faith” works as a feet-first dance number and a melody-laden earworm for a listener more interested in pop songcraft.

“Round and Round” likely sounded a bit out of step with the times upon its release in 1989; at the tail-end of the ’80s, many listeners were — understandably — exhausted with this brand of radio-ready synth-pop. Of course, New Order were the progenitors of the sound that eventually dominated the airwaves, and “Round and Round” offers proof that the band still did it better than almost everyone else. The song’s opening synths are positively aggressive, melting away into Sumner’s airy vocals and fluid melody. The groove is irresistible; it and the sunny melodies belie the track’s underlying darkness. Who said dance music has to be cheerful?

The follow-up single to New Order’s breakthrough hit, “Blue Monday”, “Confusion” displays the same driving momentum as its more famous predecessor but with a more upbeat, celebratory atmosphere. The lyrics are still dour: “You just can’t believe me / When I tell you what you mean to me / (Confusion!).” But Sumner’s speak-sing delivery and the shouted back-up vocals bring a swagger to “Confusion” absent from the clinical, chilly “Blue Monday”. Think the Clash meets an 808 and Arthur Baker. Baker, the song’s producer, also worked with hip-hop pioneer Afrika Bambaataa, and his fingerprints on the track are unmistakable.

Try to ignore the lyrics. Bernard Sumner’s revisionist history — JFK hires a hit on wife Jackie, so he can be with Marilyn Monroe instead — is beguilingly strange at best and cringe-worthy at worst. Luckily, “1963” features a gliding synth foundation that breezily supports Sumner’s restrained, quite pretty vocal. The track’s producer, Stephen Hague, supposedly quipped that “1963” is “the only song about domestic violence you can dance to”. That about nails it.

If 1989’s Technique found release at a time when New Order’s signature sound had thoroughly saturated the airwaves, 1993’s Republic — and specifically, its hit single, “Regret” — saw the band moving into new territory. “Regret” is as wistful as the band’s most melancholic material, but instead of cloaking that sadness in frigid synths and clattering drum machines, this track gives it wings: “Regret” soars with the best of early ’90s Britpop. Sumner’s plaintive vocal performance is among his strongest and most subtle. The song bounces along on Peter Hook’s typically emotive bassline, and Sumner’s staccato guitar hook seems to gain import with each repetition. “Regret” served as something of New Order’s swansong, as the band broke up later that year. It would reunite in 1998, but it’d never quite recapture the easy beauty shown here.

On the opening track to New Order’s first proper studio LP, Peter Hook shows off his best Ian Curtis impression. Though Bernard Sumner would go on to become the band’s primary vocalist, Hook’s voice bears much more of a similarity to that of the late Joy Division frontman; if you close your eyes and turn the volume down just a bit, “Dreams Never End” plays like a lost Joy Division cut. Even the lyrics attempt to cop Curtis’s dark abstractions: “We’ll change these feelings, we’ll taste and see / But never guess how the him would scream.” Still, the difference between the two groups is already on display here: Sumner’s guitar is brighter than in most of his Joy Division work, and Stephen Morris’s jittery drumming has solidified into a steady, hi-hat-and-kick-drum pulse. The song’s core might seethe with tension, but its surface is as inviting as they come.

“It’s called love / And it’s the only thing worth living for!” Hard to argue with that. Hard to argue, too, with the dueling synth and bass melodies here. In fact, every instrument on deck in “Thieves Like Us” makes its own hummable contribution to a gorgeous patchwork of melodies. Sumner’s vocals may be a bit strained, but that’s part of the charm (see also: #15 on this list). “Thieves Like Us” is completely transportive, a vessel to lift you up and away from your troubles. Sentimental? Sure. Romantic? Absolutely. Brilliant? In its own unassuming way.

“Your Silent Face” achieves the blend of stately grandeur and arch attitude usually reserved for New Order’s Mancunian contemporaries, the Smiths. An insistent beat and low-level synth line lay down a steady rhythm, while a melodica sighs over bursts of keys. Sumner practically exhales his vocals, a torrent of sad-sack one-liners (“We asked you what you’d seen / You said you didn’t care”), culminating in a blunt, disarming bit of humor: “You’ve caught me at a bad time / So why don’t you piss off?” “Your Silent Face” is much like this line, a remote lightness cut through with melancholy.

Keeping up with New Order’s trend of placing showstoppers in the opening slot of its records, “Love Vigilantes” kicks off 1985’s Low-Life with one of the strongest — and most straight-forward — tracks of its career. Bernard Sumner’s lyrics are often a bit too romantic, but his story of a soldier coming home from war to surprise his family contains just the right amount of heroics and simple pathos to carry the “r” word. Peter Hook does some heavy lifting, too, with a vintage Hook — uh — hook. The bassist is famous for turning his rhythmical instrument into something more like a lead guitar, and “Love Vigilantes” features some of his most engaging, high-necked playing. You might not expect it from New Order, but this is celebratory, summertime listening: windows down, volume up.

Power, Corruption & Lies has been rightly celebrated as the album on which New Order broke into its trademark synth-driven sound, but many of the record’s highlights come when the band hews more closely to the classic guitar/bass/drums formation. The penultimate track on Power, “Leave Me Alone” may be the prettiest ballad in the New Order catalog. Sumner’s wandering guitar riff evokes a quiet restlessness, as do his lyrical references to the strange feelings of disconnection one often experiences in crowded places. He doesn’t get much credit as a groundbreaking guitarist, which is fair enough; Sumner’s playing doesn’t wow with fleet-fingered pyrotechnics, but the man knows better than most anyone the value of economy. You could call his style minimalist, and “Leave Me Alone” proves that you don’t need to be showy to really dig at the heart.

“The Perfect Kiss” is the perfect ambassador for the 1980s: layers of clattering drum machines, spiky space-age synths, wonderfully tinny keyboard tones. The same things that make the song sound dated also give it its magnetic pull. When the chorus hits — “I know / You know / We believe in a land of love” — all bets are off. Early in the band’s career, New Order visited New York City’s famous Funhouse disco. After the trip, the group felt newly convinced of dance music’s power to transcend its listeners’ worldly anxieties. “The Perfect Kiss” may be the band’s best testament to that belief.

Peter Hook: MVP. The riff that opens and sustains “Age of Consent” has to be one of best in rock history — and it comes from an instrument usually relegated to the shadows at the back of the stage. Hook and drummer Stephen Morris lock into a groove that repeats, with slight variations, for the entirety of the track, and it’s still difficult not to hit repeat right when “Age of Consent” ends. In other words, repetition doesn’t have to be boring. Here, it’s positively thrilling. Music for bouncing through the ceiling or running through brick walls.

“Temptation”, so much more than Movement, announced to the world that New Order was done with being Joy Division. That band never recorded anything nearly as unapologetically jovial as “Temptation”, a vision of pop songcraft designed to hit with maximum pleasure. “Up, down / Turn around / Please don’t let me hit the ground”, shouts a chorus of Sumners, inviting a kind of audience participation alien to the attitude of the distant, cold Joy Division. If Joy Division perfected music as personal stand-off, remote and evocative, New Order and “Temptation” give us music as release, the catharsis that comes after the pain.

You hate to single out a band’s first song as its best, but what choice does “Ceremony” leave us? Yes, referees: “Ceremony” was written by Joy Division before Ian Curtis’s death. But New Order made the song its own, and all of the band’s DNA is here in utero: Stephen Morris’s steady, disco-inflected beat; Peter Hook’s iconoclastic, melody-centric bass playing; Bernard Sumner’s jagged, emotive guitar. A surprising brightness pervades the song, cracking through its atmosphere of tension; when Sumner’s guitar returns after the bridge for the final chorus, it brings a feeling of victory, a euphoric rush. The 1987 re-recording sounds more streamlined without losing the original’s vitality. Whichever version you prefer, “Ceremony’s” status as one of the greatest tracks of all time is assured.