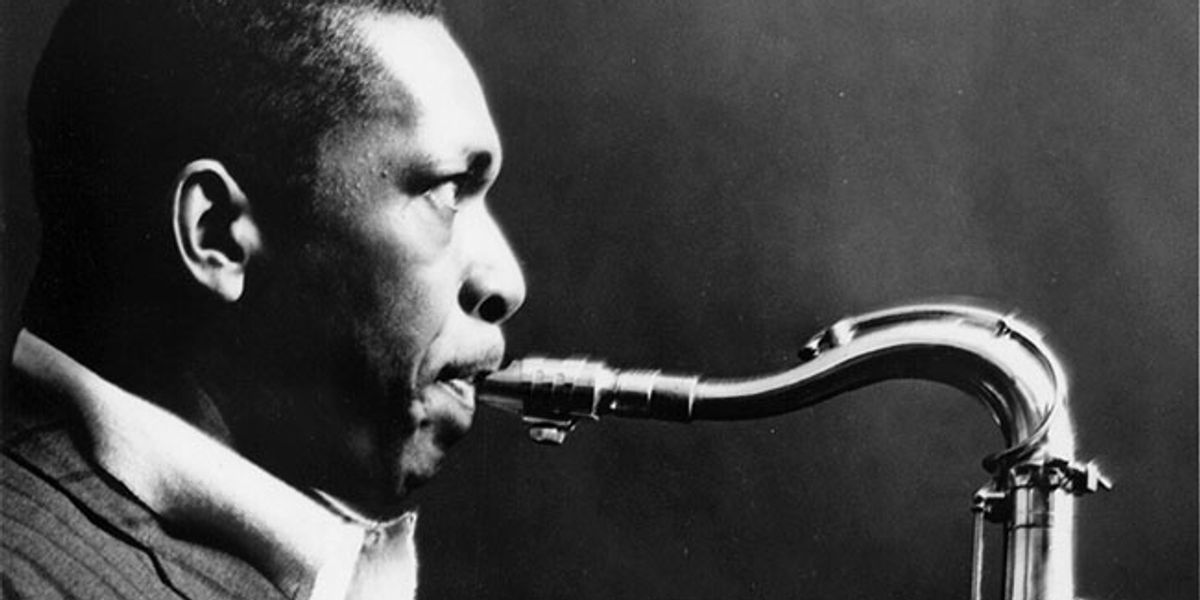 Coltrane popularized the use of the soprano saxophone in jazz, and this track had a lot to do with it. “My Favorite Things” demonstrates the broad appeal of Trane’s art. He managed to take a Rogers and Hammerstein tune that everyone has heard before and turn it into a pleasantly meandering epic, one that fellow musicians gawk at for its technical prowess — yet also became a radio hit (albeit in an edited form). Instead of soloing over the tune’s chord changes, Trane solos over an extended vamp of only two chords, thus cementing the modal approach that he had been working on for a while by 1960. There’s a mesmerizing, bewitching quality about it that’s a far cry from the original tune.

9. “Oleo” from Relaxin’ with the Miles Davis Quintet (Miles Davis)

Despite his gaining fame for the experimentalism of his later career, Trane could play straight-ahead bebop like none other as well. “Oleo”, a tune by Sonny Rollins based upon the ubiquitous “I Got Rhythm”, is the perfect vehicle for Coltrane to show off his chops and artistic creativity. “Oleo” is definitely one of the most sing-able solos in Trane’s catalog. During every chorus, he manages to throw out an improvised melody worthy of a pop song. This is Coltrane at his height with the Miles Davis Quintet. Straightforward jazz doesn’t get much better than this.

8. “The Night Has a Thousand Eyes” from Coltrane’s Sound

Standards have always been the hallmark of the jazz canon. As musicians learn how to play jazz, they always must contend with the repertoire of show tunes and American pop songs that often get called on the bandstand. Coltrane had a way of taking standards and twisting them to the point where they are sometimes barely recognizable. There are a multitude of examples of this phenomenon, but “The Night Has a Thousand Eyes” is definitely one of my favorites. This version features an Afro-Cuban-inflected groove and a chord structure that’s modified from the original to fit the modal sounds Coltrane was embracing in 1960. Trane’s solo moves in and out of keys, while keeping the essence of the standard tune intact. Here we have a primary example of Coltrane the masterful melodic manipulator.

Above all, Coltrane was a bluesman. He’s played so many amazing solo on blues tunes that I don’t even know where to start. There’s a reason “Blue Train” stands above the rest, though, and has become so famous. Trane’s solo on this title track swings like mad. The saxophonist is so locked in with the rhythm section that it seems like they’re inseparable. Coltrane blows his way through eight blustery choruses, rarely pausing to take a breath. “Blue Train” finds Trane at an intersection between the bebop of his early career, the blues that he would redefine throughout his life, and the technical “sheets of sound” approach that he was developing at the time. There’s something here for fans of each stage of Coltrane’s musical development.

Coltrane’s latter music, the stuff he was making right before his death in 1967, is controversial to say the least. Much like the final music of Beethoven, Coltrane was breaking through to something new at the end of his career, music that was wildly forward-looking and misunderstood by many. Interstellar Space was originally not released until 1974, and consists entirely of freeform duets with drummer Rashied Ali. Most of the tunes abandon principles of melodic and harmonic structure. Coltrane is playing with a kind of wild abandonment, making squeaks and squawks come out of his horn that nobody even knew existed. The interplay with drummer Ali is the glue that holds “Jupiter” together, though. It’s interesting to hear how Trane can make relevant art with essentially no parameters. In some ways, this is harder to do than when you are given many guidelines.