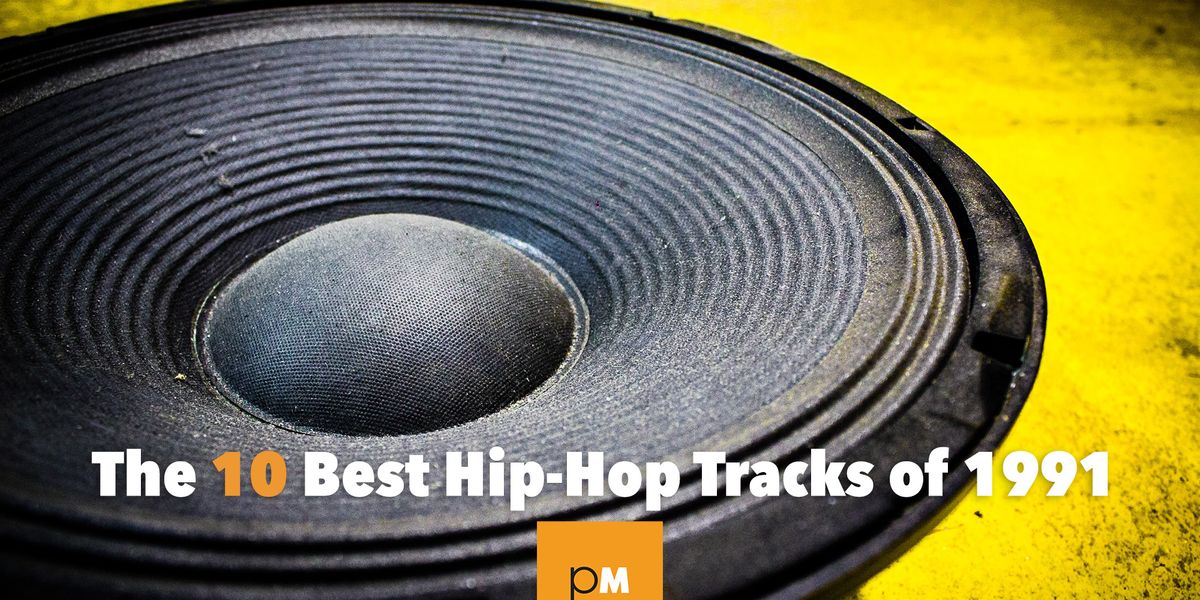 Main Source – “Live at the Barbecue”

Foremost among 1991’s superlative beatcraft is Main Source’s LP Breaking Atoms. Astonishingly out of print for more than ten years until 2008, Breaking Atoms was the product of producer/MC Large Professor and Canadians Sir Scratch and K-Cut. It’s hard to pick a standout track from the album, with highlights such as “Just a Friendly Game of Baseball”–a tale of police brutality marching across the top of the mainstay Lou Donaldson “Pot Belly” sample. “Peace Is Not the Word to Play”, like “Snake Eyes” or “Just Hangin’ Out”, is comprised of samples so densely intertwined that it is only with attentive headphone listening that the songs’ distinct components are revealed. “Live at the Barbeque” introduced Nas to the world: ostensibly an MC cut, Nas’s taut delivery ignites the song from its first verse, signalling the talent that would flow into Illmatic in 1994.

A wall of textbook DJ Premier productions — tight, perfectly focused, impulsively looped creations–Gang Starr’s second album, Step in the Arena, was modestly reviewed upon release. But songs like “The Meaning of a Name” and “Beyond Comprehension”, with its reversed opening — a brilliant transformation of a fragment from Soul II Soul’s “Keep on Movin'” — show the kind of textural experimentation that kept Premier in the front ranks of producers, alongside the crowd-pleasing loops of “What You Want This Time?” and “Love Sick”.

Guru’s lyrics remained clear, open, and effortlessly confident. At their best, the contrast between their styles was there if you were listening for it but disappeared into the pure strut of their sound. Guru was full-on and braggy in “Step in the Arena”, Premier stripped-back and dusty. In “Just to Get a Rep”, Premier bounces around a loop from Jean-Jacques Perry’s kitsch organ LP Moog Indigo, while Guru is chillingly casual as he describes a stick-up kid’s pursuit of a victim. “Brothers are amused by others brother’s reps / But the thing they know best is where the gun is kept”.

Three years after initiating the gangsta genre with Straight Outta Compton, NWA returned in 1991 with Efil4zaggin, without Ice Cube but with some caustic responses to his departure over a royalties dispute. From that album, “Alwayz Into Somethin'” was one of the earliest examples of Dre’s G-Funk style, slower and almost washed out by hazy synth lines, a sound which was later to be explored extensively in The Chronic and, indeed, exhaustively, across the first half of the 1990s.

Remarkably catchy, built off a Melvin Bliss beat and supported with a Jackson 5 sample, “O.P.P.” was everywhere in late 1991, in spite of its lyrical content; and it still recurs on film soundtracks with striking frequency.

Del the Funkee Homosapien – “The Wacky World of Rapid Transit”

Del was only 18 when I Wish My Brother George Was Here was released under the tutelage of Ice Cube. George is more heavily determined by a P-Funk influence than the later Hieroglyphic records like Del’s No Need for Alarm, Casual’s Fear Itself, or Soul of Mischief’s 93 ’til Infinity, which show a muscular awareness of space in contrast to the tight and busy funk of this album. But there are hints of it on “Dark Skin Girls” and elsewhere. And songs like “Pissin’ on Your Steps” and “The Wacky World of Rapid Transit” rumble and clatter in a series of brilliant collisions of sample and riff and lyric, diced with Del’s off-kilter perspective .

Cypress Hill – “How I Could Just Kill a Man”

Dark, cloudy, and unsettling, Cypress Hill’s debut was enormously influential, a key influence on the stripped down, flung-together “abstract hip-hop” genre that bled into downtempo and so-called trip-hop just a few years later. The tracks are dense, layered creations; coalitions of drug-induced haze; shards of samples brought together with the edges facing out; lyrics that bring together street violence and nursery rhymes. “How I Could Just Kill a Man”, with its patchwork, coming-from-all-directions chorus, was the b-side to the album’s first single, and broke to a bigger market on the back of extensive MTV airplay and its inclusion in the movie Juice.

Controversially and vehemently rejecting the imagery cultivated so successfully by 1989’s Three Feet High and Rising, De La Soul’s sophomore album De La Soul Is Dead remains a funny, thoughtful, and relentlessly beats-driven album, from the flattened snare sound and lumbering bass of “Oodles of O’s” onward. There’s astonishing force behind “Afro Connections at a Hi-5 (In the Eyes of a Hoodlum)”, which takes the Miami Bass’s subsonic 808 bass sound to make the floor of the song behave like a trampoline, and hauls across the top of it a horn and piano sample from James Brown’s “For Goodness Sake, Look at Those Cakes”.

On “Millie Pulled a Pistol on Santa” the group’s lean and yet patient storytelling paces over the galactic impetus of Funkadelic’s “I’ll Stay”, slowly unspooling a dreadful tale of child sexual abuse to the violent inevitability of its conclusion.

What is it possible to say about this song that the song doesn’t say about itself? “What about the groove that soothes that moves romance / Give me a soft subtle mix / And if ain’t broke then don’t try to fix it / And think of the summers of the past”. A recasting of Kool & the Gang’s “Summer Madness”, this track was part of the extensive hip-hop summer catalog along with Nine’s “Whutcha Want” and Ice Cube’s “It Was a Good Day,” and still oozes from car stereos every year.

Black Sheep – “The Choice Is Yours”

Emerging from the Native Tongues collective with its debut, A Wolf in Sheep’s Clothing, Black Sheep had a stunning start with “The Choice Is Yours”. But if anything that song is over-exposed. Elsewhere on the album, “Butt in the Meantime” and “To Whom It May Concern” are effortlessly funky, and “Yes” is muscular and punchy. Like De La Soul’s “Afro Connections”, “U Mean I’m Not” takes a swipe at the emerging gangsta genre. Still, try to keep still while you listen to the pushy alliance of lyrics and beats in this passage from the middle of the first verse (“The styling is creative, Black Sheep of the Native / Can’t be violated, or even decepticated / I got brothers in the Jungle, cousins on the Quest / Deaf retarded uncles, in parties were they rest”).

A Tribe Called Quest’s The Low End Theory was everything it said on the tin, a thunderously bass-heavy album, but one scored with intelligence and wit. Legendary Miles Davis bassist Ron Carter was on board for “Verses from the Abstract” a track that epitomizes the strange asymmetry of the album’s production: a 808-style sine bass throb sets the song bouncing, before being joined by Carter’s bass figures which pop and splurge around in the song’s middle range below a sample cleverly filtered out of the soupy 1977 Heatwave single “The Star of a Story”.

But “Check The Rhime” is the song that united samples from Grover Washington Jr., Minnie Ripperton, AWB, and the Steve Miller Band into a woozy, thumpy summer anthem, animated by the group’s sense of drama and timing. With the video and the storming kick drum interludes, it seemed like the world was stamping on the roof.