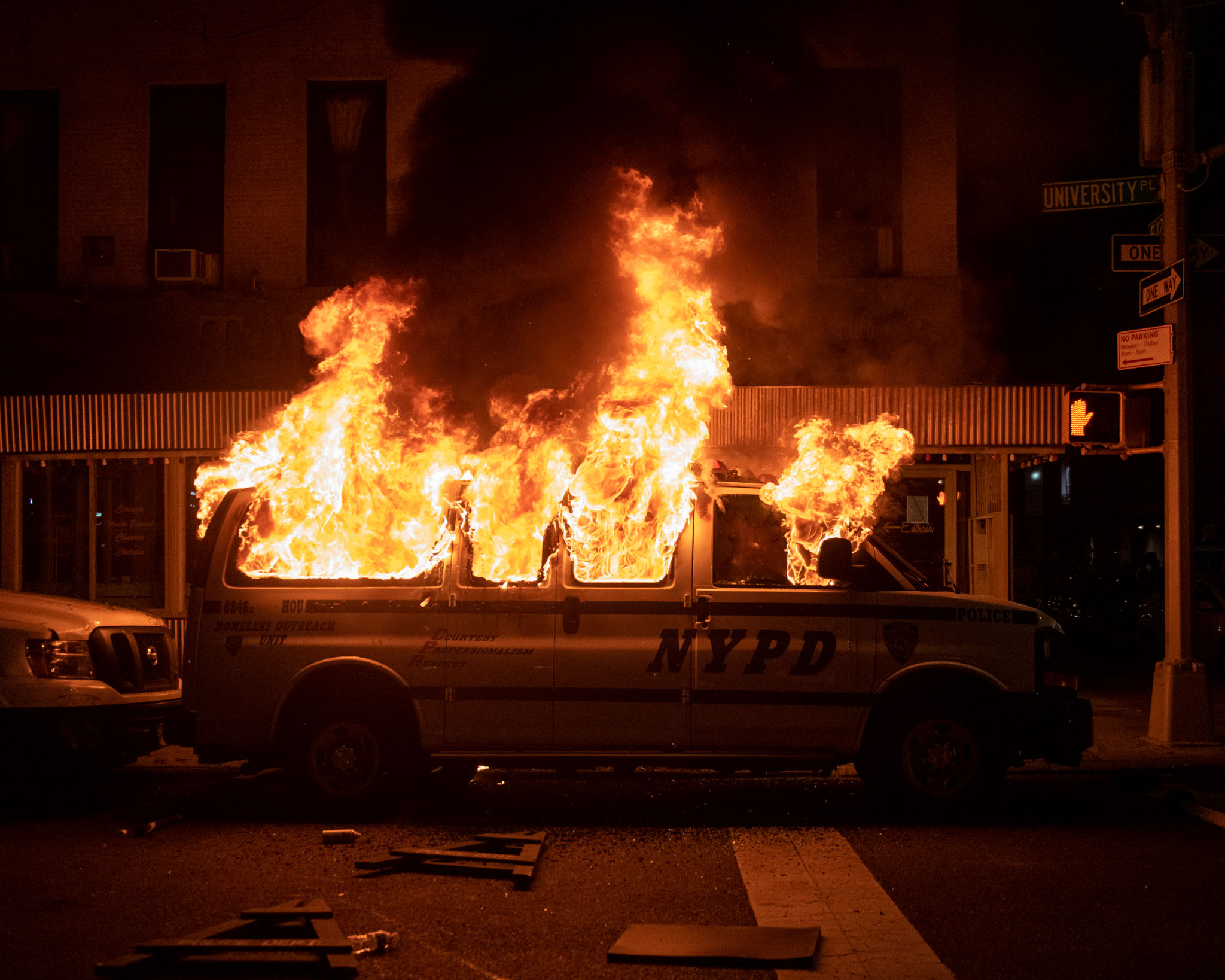 On this installment of Photographers On Photographers, Sarah talked to Nick Karp. An NYC-based photographer who’s multi-subject work and documentary style is the essence of what photography is all about. They talked through their career, “hot takes”, and photography in general. How did you first get into photography?

So my Dad was a photographer, and I was told that if I wanted to be my Dad’s assistant after my 13th birthday I could do that. So the week after my 13th birthday, I was like, “alright, what am I doing?” I’ve always had that ambition. I used to carry around his gear to weddings which was a lot more camera gear than I normally carry with me now. From then on, I never really took pictures. I was always kind of just helping out. At 16 I made a music website called Re-Write the Scene which was short-lived but it got my foot in the door when it came to music stuff. I was in high school and I really wanted to see Against Me, and I saw other websites reviewing stuff so I was like, “why don’t I review it?” I asked for a review ticket and their people asked if I wanted a photo pass and I didn’t know what that meant so I said “sure”. I asked my Dad to lend me a camera and he said “no.” He ended up lending me a camera, and the rest is history. I fell in love with it.

You shoot a very wide range of subjects, how did you get into photographing all of these different subjects?

I shot music for so long that I felt like I was being pigeon-holed. I’ve done stuff that was around music like event work and coverage. I hated weddings, so that was a no for me. Music was always stimulating for me, it was fun and ambitious to shoot. A couple years ago this person was doing a no-ring wrestling show at a bar in Brooklyn so I thought “this seems weird, let me shoot that.” So after shooting that, I hit up a couple of promoters near me to shoot their show. The first couple of wrestling shows I did were just terrible, bad lighting, I didn’t know what I was doing. I was trying not to be in people’s way. From there it was just a progression of networking. Like, this person saw my work and they emailed me. The big thing, the big break for me, was this person Adam hit me up, who now works for this company called Orange Crush who now does my wrestling book.

I know that you’re a big wrestling fan and photograph matches pretty frequently, what are some of the big key differences you experience photographing a show versus a match?

In terms of similarities, it’s reading body language, it’s reading movement. Let’s say you’re photographing a pop-punk band and you see someone bunny-hopping for a moment the chances are they’ll do a big jump in a hop or two. So it’s really the timing. I’ve watched enough wrestling to know what to look for. A lot of the matches are the same, so you can kind of tell when the moves are going to happen. There’s also not that element of surprise as much that you get at a show. Technically wrestling is at a much higher shutter speed because they’re moving a lot faster. There are very few exceptions to that rule. For the most-part it’s very similar. Wrestling you need to be on your feet a bit more than the hardcore stuff that I shoot because you can get hurt really easily. I can kind of hold my space at a hardcore show, but in wrestling there can be that unpredictable nature with the stuff I shoot. Mainly the dudes in the glass I’m more scared of. It can go from not that dangerous to very dangerous really quickly. During the pandemic [when restrictions eased up] I was also thinking, “there’s gotta be people doing something.” I made sure to get vaccinated as soon as I could and get tested before and after the shows. This is a time in history that hopefully won’t be repeated and I wanted to document that as much as possible. You’ve also toured with bands before, what has the touring experience been like for you as a photographer?

Since tours are back I am feeling ready to get back on the road, so I’m available if anyone wants to book me. It’s just a job to me like anything else. I don’t treat it as this mystique thing. I know a lot of photographers want to do it, but not a lot of photographers want to get into the nitty-gritty of it. Especially with band touring. It’s not an easy lifestyle and I think it’s very glamourized with movies with Almost Famous. Don’t get me wrong, that was my dream tour. It is a very glamourized thing and it’s not talked about, about how shitty it can actually be. Living with 7-8 dudes some of which I barely know who all have their different living styles. It can not mesh sometimes.

Has there ever been a really negative tour experience that you’ve had?

There was one tour and it was the longest tour I’ve ever been on, it was 70 days straight. 57ish shows and 65 days with the band and 2 ½ travel days each. It wasn’t my favorite thing in the world. Again personalities can really clash and there’s a lot of different personalities. It’s a very human thing and especially when a band is in a new country for the first time and they’re nervous and don’t know what to expect, it can kind of clash. Especially with a very young band. But, with this being said I’ve also had amazing tour experiences as well. There’s pros and cons to every job you’ll have. People who tour for a living treat it like a job, people who don’t tour for a living treat it like a fun hobby. It can be, but it’s a career for a lot of people.

What’s one the wildest stories you’ve had on a shoot?

There’s one that comes to mind, I was shooting a thing called Gatsby Night. One of the events was this party and it was wild, there were dancers on the ceilings. Everyone is in a tux, I’m in all black and it was one of the fanciest parties I ever shot. So, I got a request from the content director to not shoot a certain race of people. I never shot with that company ever again. I shot Charlie XCX at a club and her fans were more wild than a no-barricade Turnstile show. I had a black-eye after that show. It was nuts. How has your relationship with photography changed over the years?

I feel like I’ve gotten more jaded. I hate my own work but so do most photographers. I feel like anyone I talked to who talks big game about their work is kind of off-putting to me. I love what I do, but I’ve treated it more like a job as I should. I’ve become more choosy about what I shoot. When I was younger I’d do any favor for anyone, but now I’m more hesitant about what I choose to shoot.

What are some of your “hot takes” on photography?

I’m sorry to the people I’m about to piss off. I’m a very documentary-esque photographer. I don’t really edit my work too much and that’s not to say that heavy manipulation is bad, most of the photographers I like do that because I just can’t. I don’t have the eyes and sensibility for that. I’ve seen people who like to use the same filter on 7 different photos and I get that, but it’s not for me. Also, people need to back-up and zoom in for portraits. I’m definitely more jaded than I used to be, but I think it’s because I see how people are in this scene. People come and go and I’ve been doing this for 12 years now. I’m friends with a lot of those people but I try not to follow the trends and kind of do my own thing. Also your subject is the focal point, the talent is your subject not you. There’s a photographer I’m friends with who’s named Sofie who’s instagram is @bullsinthebrnx who shoots with a kit lens and a pop-up flash and their work is amazing. Let’s talk about gear. What’s your first camera, your go-to camera, and a camera you’d want if money didn’t matter?

My first camera was a Nikon D200 that my Dad gifted me. My current camera is a Nikon D850, it does the job. I don’t care about my gear too much as long as it gets the job done. My dream camera is the Rocco GR3. I love carrying a small point-and-shoot camera, I have a Canon G10 or something and I throw a flash on and I love it. I use that a lot, and I realized I should probably get a good one. The Sony R1XR or whatever the newest one is would be cool to have. I’ve used it before and it’s very fun.

When you shoot, what do you look for in a successful photograph?

Hopefully it’s in focus. Is something happening in the photo? I’m pretty basic with it, I don’t do much in Lightroom. I shoot very documentary style and I’d rather get that candid moment, so I look for if it tells a story.

Who are some of your photo inspirations?

I’m lucky to have a very good group of friends who inspire me. I’m good friends with Tom Fallcone, Josiah Van-Dien, Nicole Mago who’s literally the most underrated photographer in music right now. I look to my friends and people who are close to me. Classic photographers wise, Glenn Friedman, Danny Clinch, Arnold Newman. Mitchell Wojick. My peers really. What would be an ideal bill for you to shoot?

Limp Bizkit, for sure, would be my dream to shoot. A stipulation for this dream bill would be that I have all access, no other photographers on this bill. Foxy Shazam, and a Chariot reunion. One more would be Dawn of Humans.

Any advice for the up and coming photographer?

The worst thing someone can say to you is no. Put yourself out there. Nothing is going to come to you, you have to reach out and the worst that can happen is someone says no.