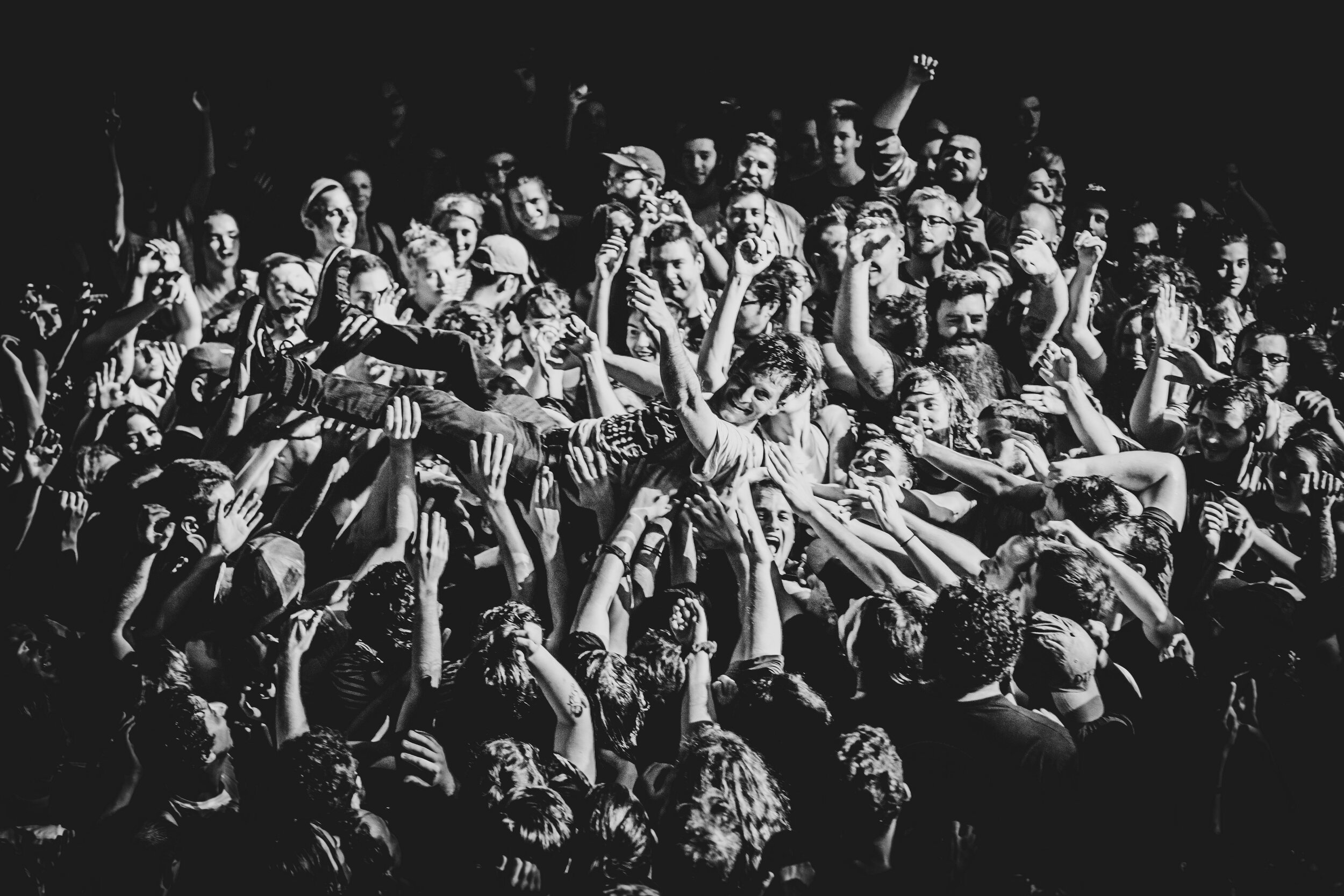 On this edition of Photographers on Photographers, Sarah interviewed the talented, Alec Pugliese. Based in Baltimore, Alec is a force to be reckoned with. Going almost anywhere in the North East and delivering their work fast for these bands. Sarah and Alec talked about their humble beginnings in skating and how they found their style. How did you first get into photography?

Well, I was in high school and all of my friends were skateboarders. So I tried to take up skating and I wasn’t good. Then I started taking some photography classes in high school and I got a camera for my birthday one year and started shooting my friends skating. I got wrapped up in that environment. I ended up going to college and got a B.A. in Fine Arts with a concentration in photography. Going into college I lost contact with a lot of the people I grew up with, all of those skaters. It was a transition going into college, [photography] was focused more on the concept and less on the craft. Which was extremely valuable but it changed my view on things, so I got more into fine art and conceptual work. Once I got out of school I started a business with my partner that was a production company. It allowed me to work for myself and make photo content for brands and companies. We did some work for the nation’s largest high school film festival. I always knew I wanted to do something with music. Being in high school and being around skaters, punk music was a part of that culture. I was doing merch for some of the local bands here and there and was in “the scene.” I played in some bands but nothing much came out of it. But, I was making flyers and taking some photos for all of my friend’s bands. When I got out of college I saw that I could take what I was good at, which was photography and video and combine it with music. It was a real evolution.

You shoot both video and photo, how did you start videography and what are some of the similarities and differences you notice between the two?

I wasn’t really into video stuff until I got to college. I entered in knowing some of the basics. I had to take a video class, but I was inspired to use video. I used a variety of mediums when I was in college. One of the galleries I did was this installation, and I used found footage and sound. My partner was already in video and they wanted to start a production company. They were already involved in this film festival. So we got involved and started doing more legit video work. We also learned how to do a lot of design stuff for social media. We were kind of like a swiss army knife for all of that kind of stuff. We eventually got a contract with this festival and worked for them full time. When it comes down to video and photo though, I felt like when I was right out of college, that’s when DSLR cameras became sort of good for video and photo. So I feel like at the time if you knew how to use a DSLR for photography, you already knew how to use it for video. At that time, there were also more video than photo jobs because iphones at the time could take decent photos. I try to put my own spin on the video though. You tend to experiment a lot with editing, what inspired you to go back and re-edit a photo?

I’ll be honest, I don’t go back and edit anything. I just don’t have a lot of time on my hands. I went back during lockdown and re-edited some stuff. I pull inspiration from a lot of the photographers I follow on instagram and combine a lot of different styles. So I came across this style of black and white where the highlights are punchy and using a little bit of clarity, not too much because it doesn’t look right to me. I just have this flow in Lightroom. I don’t do a whole lot of extra photoshopping. Since I shoot with flash a lot, I may go back in and remove some dust. But when it comes to shooting a show, it’s pretty simple. This being said, I’m super picky and will play with the sliders for a while. The reason why I don’t go back too much, is because when I shoot a show, I edit the photos that night and get it back to the bands ASAP. Your zine is amazing, can you take me through a little bit about conceptualizing the zine and the process?

So I used to have this blog called mosh blog, and one of my goals is to publish a photo book. I always thought that mosh blog would be that book. I’ve been working on a mosh blog photo book for a while. So in 2019, I started to have a collection of digital concert photos. Before I was just using a disposable camera. I also was starting to go to therapy and I needed a goal to work towards. So I started making a collection of photos and I already had some design work experience. I just played around with the layout and it all came together, and I put the zine out. Let’s talk gear, what’s your go-to camera, your first camera and a camera you would want if money didn’t matter?

My go-to photo camera is my Canon Mark II 7D and it’s mainly because it’s the only one I have. For video, a Canon C-100 Mark II. I’m trying to upgrade to a SONY mirrorless, so if money didn’t matter, I would just want a SONY. I’m not sure if I want an A74 or something else. To be honest, all of these photos confuse the hell out of me. Why couldn’t they just give out cool names? The one I got for my birthday was probably the first one and it jump started my whole photo journey.

What are some of your “hot takes” on photography?

I probably have more hot takes on video. I just feel like I’m more judgmental watching videos than looking at photos. If I see an overly photoshopped image, I think it can be cool, but if I see a bad video it bothers me. I really don’t like when there’s a black and white image and just one part of the photo is color. Also when people aren’t respectful in the pit. I don’t really talk to people at shows if I don’t know them. I don’t really like how clique-y photography can be sometimes. Who are some of your photo inspirations?

Recently, Charles Peterson. Amanda Fotes on instagram was one of the people I started to follow and their work just struck me. They were one of the first that made me be attracted to black and white.

What advice would you give to the new music photographer?

Just do it. It doesn’t matter what camera you have. Be cool and respectful.