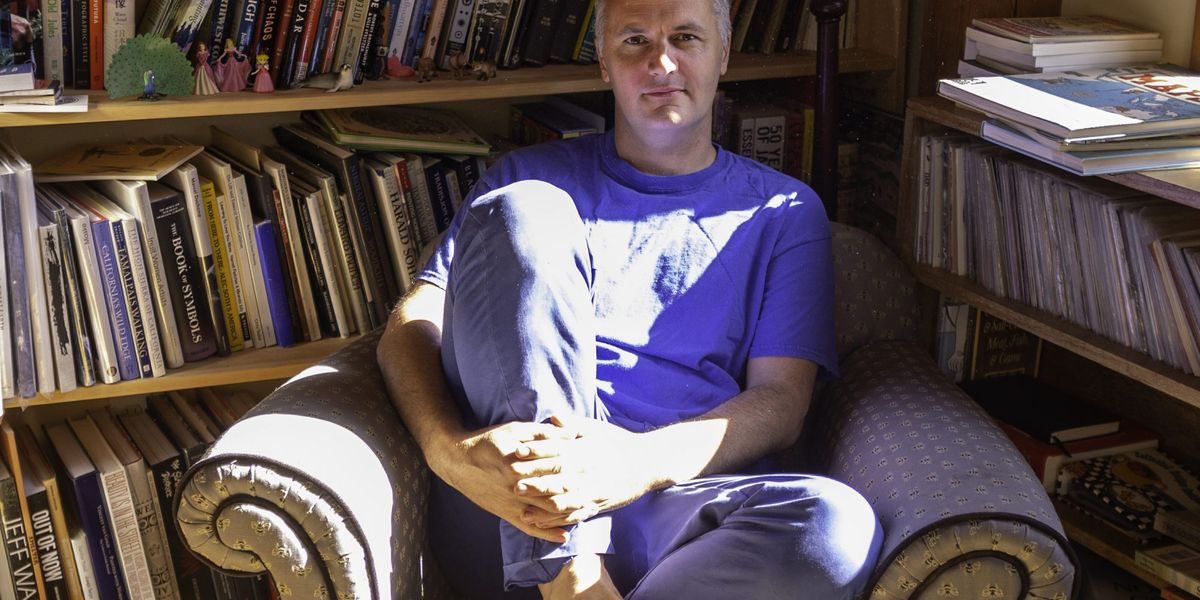 Phil Elverum is both a pariah and a hero. This position is pretty typical in the pariah/hero-rich world indie rock. Still, Elverum’s circumstance is unique, considering he is a 42-year-old single father who waxes poetic on existential dilemmas in chorusless acoustic folk songs and is best known for having written a raw, harrowing, and very tender album about the death of his wife.

Elverum’s music, both as Mount Eerie and his earlier project the Microphones, exudes myth without fabricating image. He doesn’t sell listeners on an ideology or a way of life, though he details the mundanity of day-to-day life with lines alternatingly simple and metaphorically charged, promoting nothing save for quiet introspection. He doesn’t want to play stadiums to sell-out crowds, and he doesn’t say things like this to win over fans on fabricated principles or to make up for the ceiling of his limited mainstream appeal. He just seems to make music because he loves it, without any careerist tendencies on display.

His music is intimate, his relationship to the outside world seems nearly hermit-like, and his fanbase is the kind that brings to mind adjectives like “dedicated” and “cultish”. Elverum records in his home in Anacortes, Washington, runs his label (cheekily called P.W. Elverum & Sun), masters his records, and even designs his record sleeves. Elverum’s manner of retaining complete control over his art suggests that he loves his art more than musicians who settle for label-generated album titles and then maybe settle for making the hit their label wanted that they will loathe playing live for the rest of their careers. It’s doubtful that Elverum holds anything against bands that play sold-out stadiums, but he does have about as pure a platform as a musician can hold.

Because his latest record, Microphones in 2020, was released not under his longstanding moniker Mount Eerie, but under his long-abandoned, indie-cred-garnering moniker the Microphones, casual fans might expect a return to previous concerns and sounds. Instead, Elverum offers listeners a memoiristic, multifaceted, and doggedly meta rumination on his origins as a songwriter, his purpose for creating art, and what he deems “the true state of all things”. It’s delivered in what he calls, within the record itself, a “spooling-out, repetitive, decades-long song string” that runs for 45 minutes, actually does sound like a single song, and is comprised of just a few chords.

That is no gimmick. Well, at least it’s not as gimmicky as releasing a seven-inch single on which both sides contain every song from an album played over the top of each other at the same time, which Elverum did in 2012 with his “condensed versions” of Clear Moon and Ocean Roar. Microphones in 2020, by contrast, is experimental in a way that doesn’t feel like an elaborate joke or an overreach of wit but a means of stripping back conventional guidelines that would act more as veils between the music’s emotional amplitude and the listener.

“So what if I label this song ‘Microphones in 2020’?” Elverum sings near the end of the record, over the same elementary acoustic guitar melody he’s been strumming for most of the past 40 minutes. “I hope the absurdity that permeates everything joyfully rushes out and floods the room like / water from the ceiling, / undermining all of our delicate stabilities, / admitting that each moment is a new collapsing building.”

Throughout Microphones in 2020, Elverum describes moments from his life that are affixed, however obliquely, to his growth as a songwriter: glowing with inspiration at age 22 after watching Crouching Tiger, Hidden Dragon at a matinee; watching his parents hold his brother naked over a fire at age 12 or 13; touring Italy with Bonnie “Prince” Billy and admiring the band’s matching tracksuits, which he understood as a mockery of the notion of persona; seeing Stereolab live in Bellingham and feeling liberated after they played the same chord for 15 minutes. The lessons gained from these moments accumulate, honing his ability to capture the true state of all things on tape.

“Nothing’s really changed / in this effort that never ends,” he sings. The drive to create never collapses. Still, Elverum admits that “[he is] older now and [he] no longer feel[s] the same way that [he] did even five seconds ago.” This is a song about respecting past selves while simultaneously disavowing them, because what other way is there to live? The alternative is nostalgia, a burden Elverum battles throughout the entirety of Microphones in 2020.

Elverum doesn’t start singing until almost eight minutes into the record; up to that point, he strums a pleasant two-chord melody. That is not a complaint. In the design of the song, which is 44 minutes and 44 seconds long, the extended introduction feels balanced. It lulls dedicated listeners into a trance, setting the monochromatic backdrop on which Elverum’s stories will overlay and come to life in color. The song is meditative, and you could say the opening section is Elverum readying listeners, offering a warm-up for bringing focus to the breathing, dropping the heart rate, relaxing the body.

It’s not surprising that Elverum’s music is familiar to a small clique of music lovers and dear to a relatively large portion of this clique. He is not a revolutionary attempting to sneak or force his ideas on the airwaves. Elverum quietly disregards expectations of commercial rock music, and by selling his records on his website, he circumvents the snubs, the “Blah, what did I just tune into?” grumblings that weird music under larger public scrutiny will eventually receive. It does not seem like he wants his records to offend any sensibilities, but rather to be discovered like a beautiful secret.

I first discovered the music of Phil Elverum by impulsively picking out the Microphones’ 2000 album It Was Hot, We Stayed in the Water on CD in a record store because the cover looked intriguing. Aside from the second half of “The Glow”, a protracted uptempo jam reminiscent of Stereolab, the album was endearingly difficult. The band shirked traditional song structures, buried melodies under dissonance, added or abandoned the rhythm section at unexpected moments, caked guitar distortion on soft-spoken campfire jingles, relished in a decidedly scattershot soundscape, and dismantled any forward momentum they worked to build. Guessing how many people were in the band and what instruments they were playing was headache-inducing and fruitless. I felt as though I’d stumbled into an innocuous cult.

I listened to A Crow Looked at Me, Elverum’s 2017 record of solo acoustic songs about the death of his wife, Geneviève Castrée, on a mattress on the floor of a third-floor walk-up on a midsummer night, lying beside a girl I fell in love with a few evenings before. We both cried. I did not recognize that this was the singer from the Microphones record. I did not feel as though I’d stumbled into an innocuous cult. For at least a short while, I felt like Phil Elverum was the only other person in the room. Or rather, I felt as if I was in Phil’s bedroom, lying beside him as he wrenched the songs from a well of despair so deep that the resultant music felt too immediate to be considered art. This was the sound of the valve thrown open, songs that didn’t feel crafted so much as expelled, grief gushing into the humid room, pooling on the hardwood floor, flooding over the mattress.

Lyrically, Microphones in 2020 is undoubtedly the work of the latter songwriter, who with time has been able to pull back from the immediacy of his grief and craft something grander and more complex than A Crow Looked at Me and exponentially wiser than anything on those early Microphones records.

Still, the album attempts to reconcile the 20-something that recorded It Was Hot, We Stayed in the Water with the 42-year-old single father. Sonic flourishes dating back from the Microphones days turn up, especially the signature droning keyboard reminiscent of an accordion and an electric guitar that crests the track like a tidal wave of warm gravel. Elverum nods back to the opening lines of the Microphones’ celebrated anthem “The Glow Pt. 2”, singing, “When I took my shirt off in the yard / I meant it, and it’s still off.”

He collapses the metaphor embedded in the original lyric: “I took my shirt off in the yard / No one saw that the skin on my shoulders was golden.” If Elverum’s golden shoulders represent the beauty he tries to convey through his songs, then Microphones in 2020 succeeds on a plane he couldn’t reach in 2001. As he’s grown older, the structures that hold his lyrics have continually frayed to the point of unspooling from anything resembling the verse-chorus-verse rock song. Even a few untethered funsies on It Was Hot, We Stayed in the Water sound like catchy pop singles compared to the repetitious song-heap of Microphones in 2020.