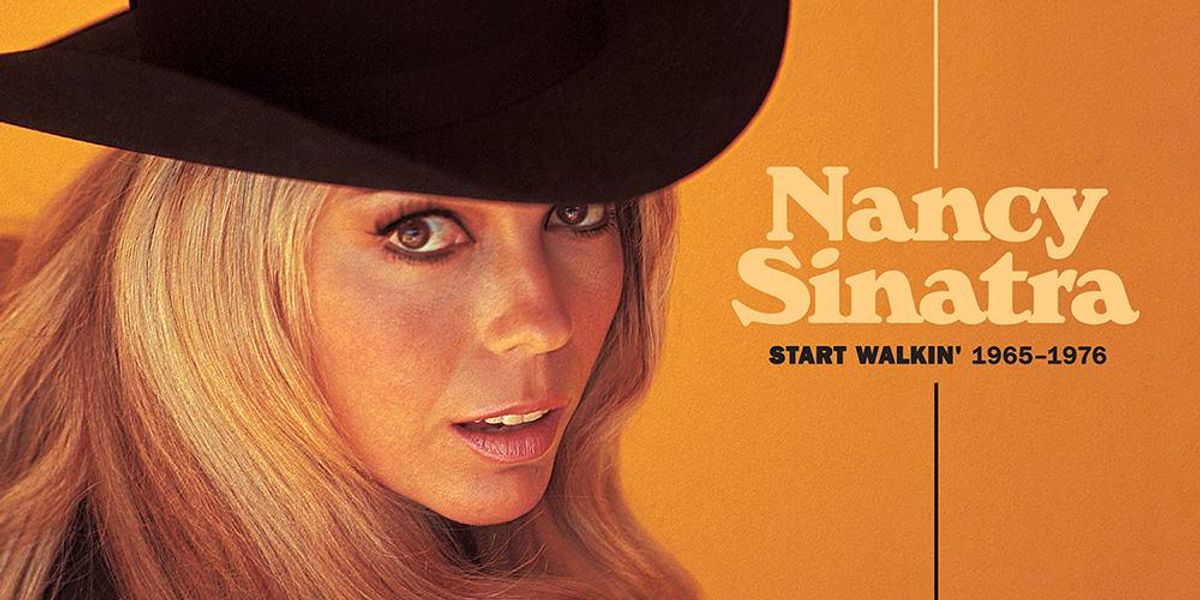 Nancy Sinatra consistently released outstanding records during 1965-1976, the period from which this double vinyl anthology was drawn, but critics consistently underrated her. Because of her famous father, Frank, people presumed her success was due to all the perks and advantages of being a superstar’s child. That was far from true, although she did work with some brilliant songwriters (in particular Lee Hazelwood) and players. During an era of celebrity nepotism, when the offspring of such notable Hollywood personalities such as Jerry Lewis (Gary Lewis and the Playboys), Dean Martin, Desi Arnaz, and Lucille Ball (Dino, Desi, and Billy) were able to generate hit records and publicity, Sinatra was frequently derided as just another novelty act. She was hardly that, and the quality of her records stood out during the time and still holds up today.

The other strike critics had against Sinatra was her overt sexuality. She wore miniskirts and bikinis on her record covers. She frequently sang in a sultry voice and promised pleasures of the flesh. While it was okay for male musicians from the late 1960s like Jim Morrison and Jimi Hendrix to exude sex, audiences perceived female artists who promoted their sexual personae as less worthy of respect. Deriders would call her a bimbo while praising male rockers for their arousing performances.

The 23 tracks on Start Walkin’ highlight the wide range of Sinatra’s prodigious talents. As the title suggests, it includes Sinatra’s best-known songs. It also contains a fine selection of some of her strange and more esoteric releases. Sinatra enjoyed experimentation and was not afraid to be weird. For every pop hit like the martial “These Boots Were Made for Walkin'”, the snappy “How Does That Grab You, Darlin’?” and the cinematic “You Only Live Twice”, there are choice eccentric selections such as the melodramatic “Arkansas Coal (Suite)”, the tall-tale “Hello L.A., Bye Bye Birmingham”, and the perky ode to a henpecked outlaw “Machine Gun Kelly”.

One never knew for sure if Sinatra sang with a wry wink or deep sincerity. Her artistry lay in the ability to convey complex meanings in simple statements simultaneously. For example, was “Sugar Town” about drugs (LSD was associated with spiked sugar cubes) or just daydreaming (“I’m gonna lay right down here in the grass / And pretty soon all my troubles will pass”) or both. The answer could be found in the chorus, “‘Cause I’m in shoo-shoo-shoo, shoo-shoo-shoo / Shoo-shoo, shoo-shoo, shoo-shoo Sugar Town”. In other words, she wasn’t about to tell. Sinatra compounded the confusion by singing suggestively. The term “sugar” as a euphemism for lasciviousness has long been a staple of popular song. By emphasizing the expression “shoo” repeatedly, Sinatra was implying something sensual and dirty without ever saying it.

Other tracks, such as the bluesy “Friday’s Child”, the semi-psychedelic “Lighting’s Girl”, and the jazzy “Kind of a Woman”, reveal Sinatra playing with different personae, but one thing is always clear. She may be tender when she chooses to be, but she is always tough. Even on her cover of Dolly Parton’s “Sown From Dover”, about a single, pregnant girl done wrong by a cad, Sinatra comes off as a survivor. Her lad and her family many have let her down, but she keeps on keeping on.

Sinatra’s most famous collaborations with Lee Hazelwood are included. Songs like “Summer Wine”, “Some Velvet Morning”, and “Jackson” are deservedly considered true classics. They create a legendary American West worthy of comparison to movies like The Man Who Shot Liberty Valence, where myth and reality mix into some archetypal past. The songs are simultaneously histrionic and natural. Part of the undervaluing of Sinatra’s talents has to do with just how convincing a naif she is in these songs—as if she was merely a puppet to Hazelwood’s vision. Careful listening proves how mistaken that notion is. Sinatra sophisticatedly endowed her contributions with the knowledge that she is playing a role. It is meta—art about art—without being ironic or cynical. Her stylish performances are consistent with the excellence found on the rest of the album.

Nancy’s best-selling 1968 duet with her father, “Something Stupid”, is missing, and that’s appropriate. That really was a Frank record with Nancy’s contribution not much more than merely following his lead. The evidence here provides plenty of proof of her talents.