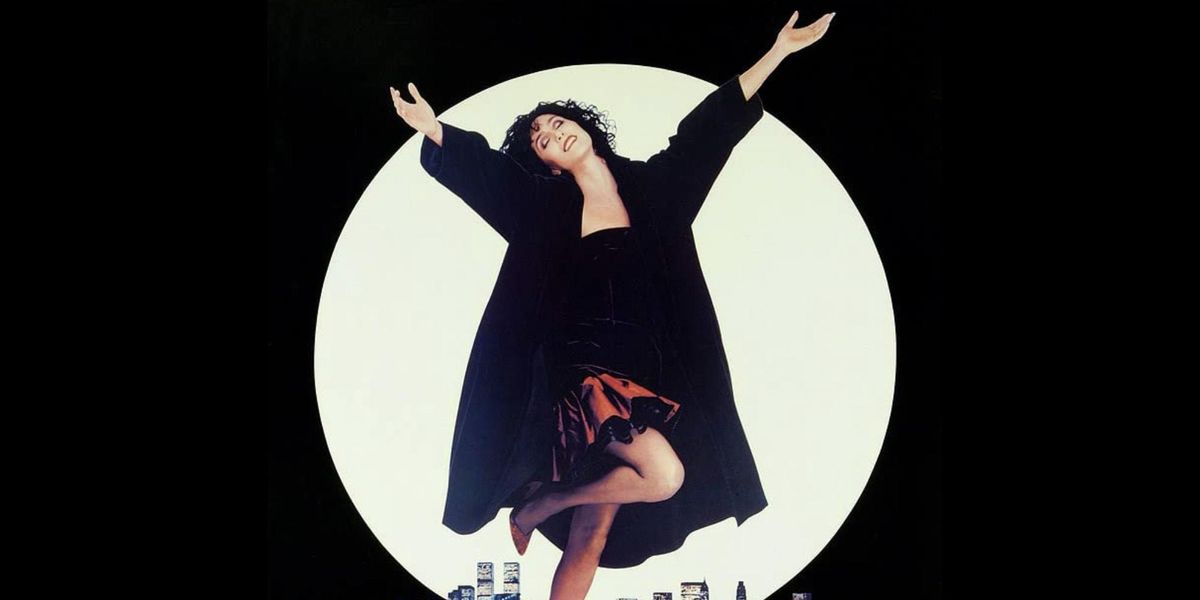 It’s not much discussed today, but the 1980s was a lesser golden age for American romantic comedies. There’s a strong case to be made that Norman Jewison’s Moonstruck (1987)—featuring an effortlessly charming star turn from Cher, an early glimpse at Nicolas Cage’s idiosyncratic wiles, and pitch-perfect backup from Danny Aiello, Olympia Dukakis, Vincent Gardenia, and John Mahoney—is among the defining films of the period.

Moonstruck and its contemporaries—James L. Brooks’ Broadcast News (1987) and Terms of Endearment (1983), Nora Ephron and Rob Reiner’s When Harry Met Sally (1989), Sydney Pollack’s Tootsie (1988), for a start—make up a unique pocket of romantic cinema driven by refined elegance and maturity. The classic screwball pictures of Old Hollywood had the former in spades but very little of the latter, and as the industry approached the new millennium, fewer films made much use of either.

Moonstruck, for its part, represented an evolution of the classic romantic comedy constructs for the ’80s, but it, along with other films of the period, marked the beginning of the end for that formula. Jewison, best known before the ’80s for directing Sidney Portier in the legendary In the Heat of the Night (1967), was a veteran of the late stages of the studio era, and it shows in the careful craft of the film. Screenwriter John Patrick Shanley was a rising New York playwright in 1987, and his ear for authentic, lyrical, and amusing exchanges was not only put to great use in Moonstruck, but it was also a throwback to the days of studio comedies when dialogue was king.

Moving forward, though, the more progressive sensibilities of new generations would dominate the genre, which would become less centered around institutions like marriage and parenthood and more about dismantling our idea of what romance can be. Films like Knocked Up (2007) and Forgetting Sarah Marshall (2008) turned the rom-com into a “guy’s” genre, while films like I Love You, Man (2009) and Bridesmaids (2011) deployed genre tropes to explore platonic friendships rather than romantic relationships. In general, after the early 2000s, whenever romantic comedy formula was played completely straight, it floundered.

In other words, it’s been some time since we had a real movement of earnest, classically-minded, well-made romantic films with a commercial sensibility, targeted to an adult audience, and without the cynicism of modern cinema. That’s what the ’80s gave us—a new age of the blockbuster rom-com in America. And under Jewison’s direction and Shanley’s writing, Moonstruck fully embodied that era’s special character.

Part of what makes Moonstruck a quintessential romance for its time is that it’s about the fundamental question of how we understand love. The film centers on Loretta Castorini (Cher), a widow embittered by her previous marriage, who eagerly settles into engagement with her boyfriend Johnny (Aiello), worried that she won’t be able to find love at her age again. Johnny flies to Italy to notify his ailing mother of the engagement, but he leaves Loretta with the task of inviting his estranged brother, Ronny (Nicolas Cage), to the wedding. After a stormy first meeting where Ronny blames Johnny for the accidental loss of his hand and his own fiancé, Loretta attempts a reconciliation that gradually sets them down the path of falling in love with each other.

In the midst of the upheaval of her personal love life, Loretta’s parents Rose (Olympia Dukakis) and Cosmo (Vincent Gardenia) secretly deal with their marital conflict. When Rose discovers Cosmo is seeing another woman, she suddenly finds herself sharing a date with womanizing college professor Perry (John Mahoney), who also frequents their favorite restaurant. It’s in this tangle of complicated situations that Moonstruck finds both its humor and its heart by slowly untying the knots we tend to create between our expectations of love and the reality of real-world relationships. As Ronny eloquently puts it during a turning point in the film, “We are here to ruin ourselves and break our hearts and love the wrong people and die.”

The most crucial ingredient of the best ’80s romantic films is yet another aspect of cinematic storytelling borrowed from Hollywood’s Golden Age: an ensemble of rich characters. This is where Moonstruck especially thrives: in Loretta’s earnest brashness and cynicism, in Ronny’s fiery heart, in Cosmo’s defiant but endearing immovability, in Rose’s gentle sophistication. From front to back, the film never wastes time on a character that doesn’t feel fully drawn and unique, no matter how small the part. Though the film traffics in some dated Italian-American stereotypes, the characters don’t feel like cartoons—even Ronny, who is at once explosive and delicately sentimental. Moonstruck works as well as it does because we recognize its ensemble in the people who we love around us, even if we don’t always understand them.

This is because, like Moonstruck‘s characters, we are all driven by emotions we don’t comprehend. The film’s key scene is when Loretta meets Ronny for the first time in the bakery basement where he works and tells her that he’ll never forgive Johnny. Loretta asks what Johnny did, and Ronny explains that his brother distracted him while slicing bread, which led to his accident and his fiancé leaving him for another man. When Loretta points out that his grudge against Johnny is irrational, Ronny explodes: “I don’t care! I ain’t no freaking monument to justice! I lost my hand! I lost my bride! Johnny has his hand, Johnny has his bride! You want me to take my heartbreak, put it away, and forget?”

This is a moment that reveals an essential quality of human nature that most commercial films rarely like to acknowledge at the risk of damaging plot and character consistency, but Moonstruck boldly does: we are fickle, contradictory, and confused creatures. Our choices and our feelings never follow an objectively ordained logic, least of all when our relationships with other people are involved. We act and feel in the moment, and change our minds on a whim. We are prone to living nonsensically.

Ronny’s confession makes the jumbled intentions and desires of the characters in the rest of the film so clear. Love, Moonstruck tells us, is the triumph of illogic. We can’t invent emotions where they don’t exist or erase them where they do, though it would be so much simpler if we could.

The film’s title is derived from a scene in which many of the film’s couples, including Loretta and Ronny, look out from their bedrooms onto a bright full moon, as though it has cast a spell on them all to fall in love in that moment. Love in Moonstruck is like actual magic, a profound superstition that locks all of humanity in its gaze at some point. It’s unexplainable, uncontrollable, yet we all acknowledge its existence. This is Moonstruck‘s distinctive poetry. It permits us to give in to our strongest passions while we still have the chance. Nothing could be more timeless than that.

The Criterion Collection has brought Moonstruck to a special-edition Blu-ray with a range of special features that any fan of the film will find great enjoyment in. The only brand new featurettes in the release are interviews with Shanley, in which he explains how he became a playwright and discusses the authentic feel of Moonstruck, and Italian scholar Stefano Albertini, who provides context for the Puccini opera La bohème, which appears during an integral scene in the film. There’s also a new essay by critic Emily VanDerWerff included in the leaflet that is by turns analytically enlightening and intimately beautiful.

An expansive array of archival content supplements these new pieces, including past interviews with Jewison, Cher, Cage, Dukakis, Gardenia, and Aiello, a 1998 audio commentary track featuring Cher, Jewison, and Shanley, excerpts from Shanley’s 1989 Harold Lloyd Master Seminar event at the AFI, a short program entitled “Music of Moonstruck”, and an introduction to the film presented by Cher at a 2013 AFI screening.

Of particular note is the 2006 program At the Heart of an Italian Family, which outlines the entire process of the production of the film with behind-the-scenes footage and interviews with Shanley, Jewison, the actors, and members of the crew, with a special focus on the film’s portrayal of the New York Italian-American experience. Moonstruck devotees will have much to swoon over here, while newcomers also get hoards of content to dig through.