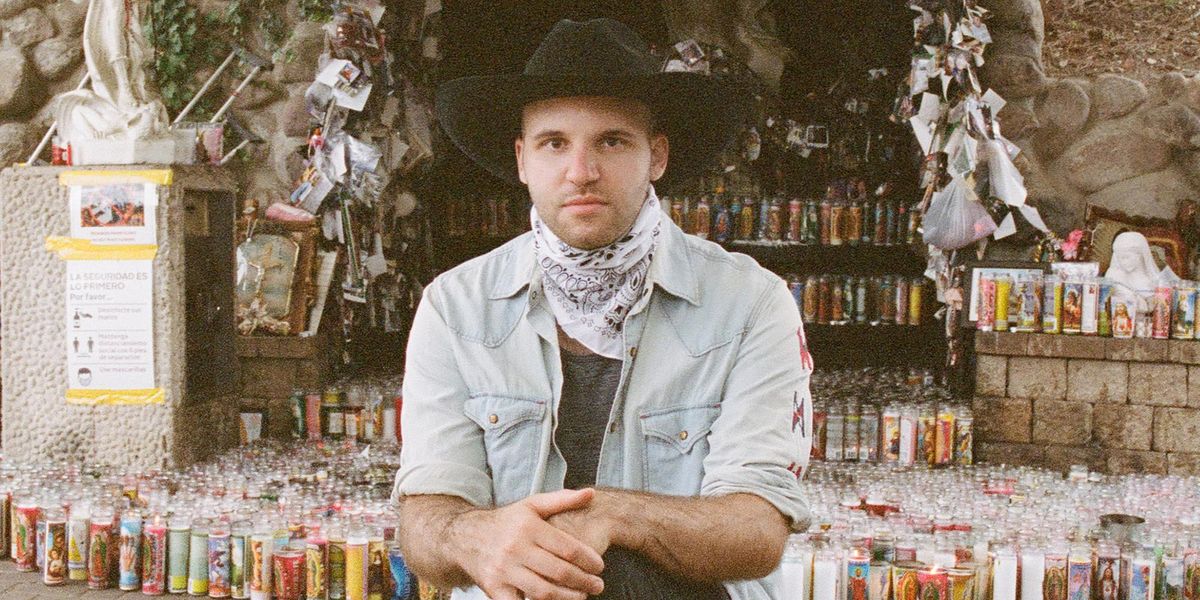 “The idea was to create electronic music with the ethos and trappings of what Gram Parsons called ‘Cosmic American music.'” That’s how experimental musician Jordan Reyes describes the inspiration behind his latest album, Sand Like Stardust, released 20 November on his own American Dreams label. While it’s also been routinely referred to as “Ambient Americana” – a description the 30-year-old Reyes seems perfectly happy with – the album’s episodic structure is as striking and appealing as the technical execution.

Designed as “a journey through human expression over the course of one day,” according to Reyes’ Bandcamp page, the nearly wordless album begins with the meditative “The Pre-Dawn Light” and ends with “Centaurus”, a new take on the classic “Mockingbird” lullaby. All the way through this hypnotic, hyper-focused album, Reyes takes a warmer, more organic approach, not only playing all the instruments himself (including acoustic, electric, and lap-steel guitars, trombone, keyboards, and vocals) but also leaving behind the modular synthesizers to which he’s become accustomed.

“I made a lot of pieces with Eurorack modular gear before, and it’s fun, but I wanted to get deeper into composition,” Reyes explains. “I wanted to make sure I wasn’t rehashing something I had done before. An easy way to do that is to change up the instrumentation. There’s a keyboard synthesizer on this album, but no modular gear.” (Modular synthesizers, for readers who are not music gearheads, are synths that use cords and switches to patch together different sounds as opposed to the more commonplace “keyboard” synths).

In a sense, a more organic approach seems fitting for Reyes since it’s simply another of the many styles he’s experimented with over the years. Born in Los Angeles, Reyes has zig-zagged around the country his entire life, living in Washington DC, Chicago, North and South Carolina, and Minnesota before returning to Chicago in 2018. Growing up with conservative, religious parents, he didn’t discover hip-hop or rock until high school. That led to writing songs on guitar and eventually developing a taste for the worlds of experimental, industrial, and noise music. While in Miami, he poured his love of experimental music into an all-vocal industrial project called Reverent – which Reyes helpfully describes as “if Nine Inch Nails were performed by a Barbershop Quartet” – before buying his first modular synth gear at the age of 28. “It just clicked,” he said of his love for modular synth technology.

Reyes’ American Dreams label has released a handful of innovative albums over the past couple of years, including the latest from Chicago-based avant-gospel pioneers ONO, of which Reyes is a member. It essentially rose out of the ashes of his old cassette label, American Damage, and became a way for him to generate income during his frequent one-person tours. His album of his synthesizer music, Close, was released last year on the American Dreams label. “It came out in June 2019,” Reyes said. “I toured like a madman that year. When I tour, I tour alone. It’s just me and all these records. I was just trying to touch people with this thing. And I think it did well.”

Reyes soon branched out with other artists for his label, including his friend John Daniel, who records ambient music under the name Forest Management and released his 2019 album After Dark on the label. Originally, American Dreams was going to release synth music exclusively. Still, when the ambient country band Mute Duo approached him with their album (Lapse in Passage), he was only too happy to release it in March 2020. ONO’s latest album, Red Summer – a jarring, atonal history lesson chronicling the brutal centuries of American racism – was originally completed before 2020. But skittish record companies who were originally only too happy to release the album eventually had second thoughts when considering their bottom line.

“So I just decided to do it myself,” Reyes said, releasing the album on his label. “At least we won’t have someone telling us what to do. In ONO, we march to the beat of our own drum, dealing with some very intense thematic subjects, and I think a lot of labels don’t know what to do with it. So we circumvented all that by just doing everything ourselves.”

Reyes fell into his multi-instrumentalist role in ONO – a band formed in 1980, ten years before he was born – while co-running Moniker Records in Miami, who had signed the band. Eventually, he joined the band, seeing its founders, P. Michael Grego and travis, as kindred spirits. “We’re all just nerds,” he said. “I was an English major, and I really love science fiction and literary criticism, a lot of the things that line up with ONO.” He, Grego, and travis all consider Samuel Delaney’s science fiction epic Dhalgren their favorite book. The first time he performed with ONO was on guitar during three shows in New York in 2016. “At the time, it was the best moment of my life. I remember thinking that I needed to do whatever I can to make music with my life. ONO pretty much informed the direction that my life took ever since – as a thinker, writer, and label owner.”

“Jordan is a very important part of our sound in regard to adding that special atmosphere of sonics,” said Grego. “A sci-fi mix of acoustic and electronic Gregorian chants, country honk, and modular synth tonics. He’s also majorly responsible for running the business. We’d be truly behind the 8-ball without his tireless efforts.” Travis agrees: “Jordan possess an energetic, engaged curiosity.” And while Red Summer was completed long before its May 2020 release date, Reyes said that the fact that this intense dissection of racism was released in the year of the murders of Breonna Taylor and George Floyd is not lost on him or the members of the band. “Red Summer was doing well, and there was interest, but when the George Floyd murder happened, we started getting more and more requests to be covered. It’s not at all lost on us that it took something like this for ONO to get some of the recognition that they’ve deserved for the last 40 years. That’s reality. People had to wake up to get it.

In addition to his solo work and the latest ONO release, Reyes has been busy putting out a variety of other titles on his label this year, including Eli Winter’s ethereal guitar album Unbecoming, haunting electronic music from Italian composer Andrée Burelli (De Sidera), and an album of bracing modular synth music from Brett Naucke (EMS Hallucinations). But one of the most unusual and fruitful releases on American Dreams so far was Hair Birth, the latest album from Massachusetts-based experimental noise artist Victoria Shen, who records under the name Evicshen.

Shen and Reyes met through mutual friends, and Reyes offered to put out her next album on his label. When Shen came up with the idea of making a limited edition version of her album that included a copper coil that would function as a speaker for the album, Reyes was all for it, coming to Boston to help her create these unique artifacts. “I only spent about three days with her working on this project,” he said, explaining that she did most of the heavy lifting. “But I think it was a slam dunk collaboration – an experience I’ll remember for my entire life.”