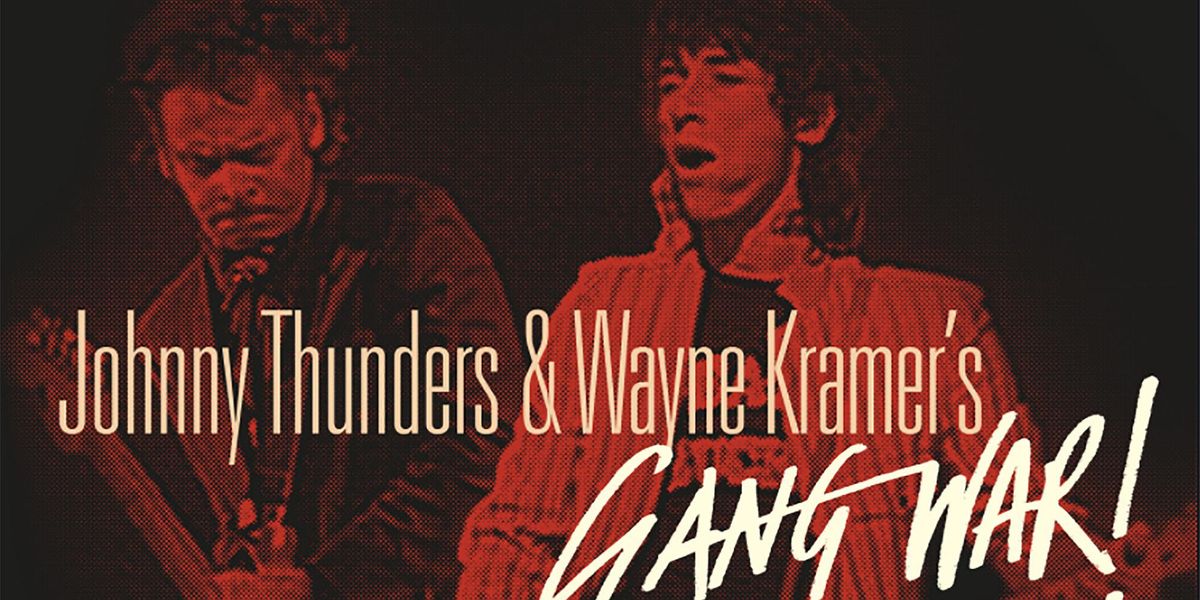 By the close of 1980, punk rock had a body count. Dave Alexander (the Stooges), Darby Crash (Germs), Ian Curtis (Joy Division), Peter Laughner (Pere Ubu), Billy Murcia (New York Dolls), Malcolm Owens (the Ruts), and Sid Vicious (Sex Pistols)—all members of either proto-punk or first-wave punk rock bands—had died either by suicide, overdose, or complications from substance abuse. Nihilism had been a motif in the lyrics from the get (“no future”), and the inordinate number of young deaths contributed to the mythology and aura of punk rock as a lawless, dangerous art form. As the critical theorist Nicholas Rombes wrote in his essential A Cultural Dictionary of Punk 1974-1982, “Incoherence, if you take it seriously, can end only in chaos.” And yet, that “incoherence” has also gotten kids off their couches, onto the streets, and away from the ledges.

Through much of 1980, two architects of punk rock toured together under the moniker Gang War. Wayne Kramer, guitarist and founding member of the MC5, served a three-year stint in federal prison in the mid-’70s on a drug conviction and upon release discovered that the kind of fast, anti-authority, hard rock his band had invented was having a moment in New York, London, and his native Detroit. Johnny Thunders had spent the ’70s playing guitar, singing, and generally wreaking havoc first in the New York Dolls, then in the Heartbreakers, then as a solo artist, known for playing like, looking like, and drugging like Keith Richards.

Thunders and Kramer’s supergroup couldn’t keep it together long enough to release a studio album, but their gigs in Ann Arbor, Detroit, and New York remained for decades the stuff of legend. Stories of the stage prowess of two of their generation’s most distinct guitarists trading licks, sharing vocal duties on the oldies, garage rock nuggets that populated their sets, and putting on raucous shows, circulated widely. So did tales of debauchery, missed or botched gigs, and outlandish stage banter. So did bootlegs of the shows.

And the music? It’s as unhinged as the legend suggests. Thunders sings most of the nuggets, “Do You Love Me”, “Like a Rolling Stone”, the Stones’s “I’d Much Rather Be with the Boys”, going in and out of a snotty, faux British accent. There’s little respect or reverence for the source material whenever Thunders takes the lead. He deconstructs ’60s-era rock songs, deflating any pomposity and stripping away all but the necessities. He’s all emotion, sneer, and swagger.

The setlist is a stroll through down-and-dirty pop music: R&B, garage rock, Chuck Berry, and Motown. Thunders also includes material from throughout his own career, tossing in deep Dolls and Heartbreakers cuts and tracks from his then-budding solo career. We get a few versions of “London Boys”, his homophobic diss track about the Sex Pistols (with whom the Heartbreakers had toured just a few years prior). “London Boys” isn’t the only regrettable moment. Thunders is constantly pushing the boundaries of what the audience will tolerate, introducing his Vietnam song “M.I.A.” with a racist epithet, and unapologetically singing the n-word in the reactionary “Just Because I’m White”. It’s hard to tell if Thunders is trying to parody racism or if he’s merely reproducing its tropes. Rombes’ line about punk’s incoherence and chaos comes to mind.

Kramer takes vocal duties on a faithful if shambolic version of the MC5’s “Ramblin’ Rose”, which opens the record, just as it opened the MC5’s debut, Kick Out the Jams. Here, too, is an example of Gang War taking the piss. Jams was already an iconic record and Gang War kicking off a set with the same song that kicks off Jams strikes me as another example of the duo refusing to canonize or bow down to any and all predecessors.

Kramer also sings on the album’s most interesting and compelling moment, a sublime cover of Jimmy Cliff’s reggae classic “The Harder They Come”. Kramer’s vocal take on a song about survival and empowerment is earnest, a striking aesthetic among the darker, apolitical ethos of Thunders-led tracks. Most listeners know that Kramer’s first band was politically engaged and committed to radicalism. We know that he’d survived a stint in prison. We know he’s earned the sentiment behind “As sure as the sun will shine, I’m gonna get my share now of what’s mine.” It’s a moment that soars, as freewheeling as the rest of the album but also, strikingly, humane.

Musically, the collection is an uneven bag. “Like a Rolling Stone” is a mess and on several tracks Thunders is incoherent. But both versions (many songs appear more than once because the album compiles three separate gigs) of “Endless Party”, a New York Dolls track, brilliantly capture the spirit of messy, guitar-driven, no-frills rawk.

The great paradox is that on one hand Kramer and Thunders are peas in a pod—both baby-boomers raised on Chuck Berry and Jagger/Richards, both committed to the raw and wild potential of rock ‘n’ roll, both struggling with drug addiction. They were born just four years apart (Kramer in 1948 and Thunders in 1952) and released their iconic debut albums four years apart (the MC5 dropped Jams in 1969 and the New York Dolls their self-titled masterpiece in 1973).

And yet, on the other hand, informed by the mythologies of rock and punk, they seem a generation and an aesthetic apart—Kramer a player in ’60s, middle-American counterculture and Thunders a member of the ’70s NYC new wave. Kramer’s best known for living at the intersection of rock ‘n’ roll and social-cum-political movements. Thunders is best known for non-partisan revelry. Zelig-like, Kramer played alongside the Woodstock, punk, grunge, and garage-revivalism generations and runs a non-profit that provides music lessons for prison inmates. Thunders died in his 30s, never having kicked heroin.

It’s too simple to suggest they’re the yin and yang of punk’s potential. They’re not on two sides of a coin. Nor are they the devil and angel on our shoulders. Rather, they exist on a continuum of wild-eyed, angle-headed anarchists—a continuum filled with poets and artists and guitar-pickers, living and dead, who show us how to resist The Man.

There’s nothing romantic about addiction or dying young. Those elements of punk’s story are sad facts. The romance, the transcendence, the wild abandon, the praxis—these things come not from the mythology but from the sound itself. The raw, often out-of-tune guitars. The soulful if unrefined vocals. The minimalist rhythm sections. Johnny Thunders & Wayne Kramer’s Gang War! has all of the above. It’s a time capsule and a car crash but, more importantly, a sonic gasp of energy. Not all of it’s great. But all of it is, most definitely, rock ‘n’ roll.