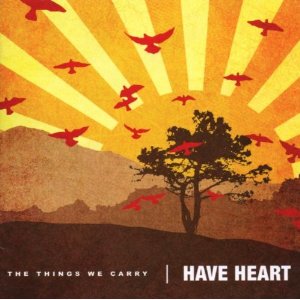 It Holds Up: Have Heart – ‘The Things We Carry’

The Things We Carry starts out with a very simple question: “Do I turn to a drink or into what I really wanna be?” It’s a question that had been asked for decades by countless hardcore bands before, dating back to the Minor Threat song that birthed the whole straight edge movement. While not novel, it endures across generations, manifesting in several bouts of revivalism. Have Heart is just one in a sea of examples. When they formed in 2003, there was an undercurrent of nostalgia for a time they had missed, when bands like In My Eyes and Ten Yard Fight were leading a youth crew revival in Boston. Singer Pat Flynn didn’t yet have the cynicism that permeated the scene thanks to American Nightmare.

Instead, there was a youthful naïveté that permeates throughout the band’s early years. The song “Something More Than Ink” is very literal in its proclamation. Claiming straightedge especially in your teenage years becomes a central point of your identity. It marks you as different from your peers. Having songs to rally around becomes central to making your new ideology feel real. Screaming the words “Something more than ink/On a page, on a shirt, on the back of my hand” becomes a sacred ritual.

This all may sound like hyperbole but the decision on whether to participate in a drug-infested culture as a teenager is momentous. Every signal you get from your television to your peers is pushing you in a certain direction. All social gatherings tend to revolve around smoking or drinking. The idea that there is another path is unthinkable. This is where a vocalist like Flynn is essential, acting as a guide and prodding those who will listen towards something else. Due to lack of life experience, he leans on rhetoric that can come across as hamfisted or corny. It’s part of the risk one plays when trying to be genuine. There’s a vulnerability in saying, “don’t lose your way” on “About Face” that’s kind of embarrassing in a good way. If it was trying to be a nuanced tale it just wouldn’t be the same. For Have Heart, capturing the emotion is more important than being clever.

Plenty of acts that preached the virtues of straightedge have been forgotten though, only to be brought up in passing. Have Heart is one of the few that have endured across generations, only growing in stature since their breakup in 2009. While well-liked at the time, no one could predict their reunion in 2019 would be host to some of the biggest hardcore shows of all time, with 10,000 people converging on the parking lot of the Worcester Palladium. So then, why did Have Heart have this arc compared to any of the other bands from the 2000s?

The answer to that rhetorical question is obviously a little complicated but you can really trace the start of their ascent to about fifteen years ago when they released their debut record, The Things We Carry. It’s the moment where the band finally disentangled itself from its influences and becomes more than an ode to Boston hardcore. The songwriting is a bit more adventurous than before and gives the listener several different looks. “The Machinist” and “Armed With a Mind” are these gigantic epics in the context of a hardcore song, building up to these huge hooks. It ends up sounding like melodic hardcore without directly striving for it, separating it from bands like Verse and Sinking Ships. “Old Man II” may be the most compelling song on the album, slowly building towards its big moments with some of the most creative guitar work on the entire record, while still working as a transition to the second half of the record. And there are still the fast and straightforward tracks that one associates with youth crew that are tastefully threaded so as not to disrupt the sequencing of the record. When you take all these pieces together, you end up with a lean 25 minute debut record that never feels overwrought.

The unexpected byproduct years later is that Have Heart also inadvertently created a foundational text for modern hardcore. It’s partially a result of the internet age that came into focus by the 2010s. Music is more accessible than ever, with streaming just beginning to emerge. Bands that played to nobody when they were active can become central figures for the next generation. It’s part of the fun of following this stuff super closely. You never know what will be the next generations first hardcore record. Have Heart filled that void for many, starting their lifelong obsession with the genre. It was just palatable enough for someone who was only into pop-punk or indie of the aughts. Flynn’s vocals are still shredded but you can still make out most of the words and it still carries with it a strong sense of melody, adding in gang vocals when needed.

To ask if The Things We Carry holds up is almost laughable. Not only is its impact still felt today, but it doesn’t feel dated at all. This is partially due to the fact that the members of Have Heart never really went away. Flynn continued to start new projects that are just as impassioned as when he first picked up a microphone nearly two decades ago. The only difference is there’s an added depth that was missing in his early material. He’s experienced the death of a parent and is now a father himself, channeling those life experiences through Fiddlehead. And we would all get the answer to what a third Have Heart record would sound like when the majority of the band came back together as FREE in 2015.

Even if none of them made any more music after their breakup, listening to The Things We Carry would still be vital. The core message of this album has never really faded away, since we still live in a world that continues to grind you down. We all need those songs of motivation when everything is simply too overwhelming. The Things We Carry is then the primal scream that persists in spite of everything, refusing to give in to despair and at least strives towards something that resembles hope.