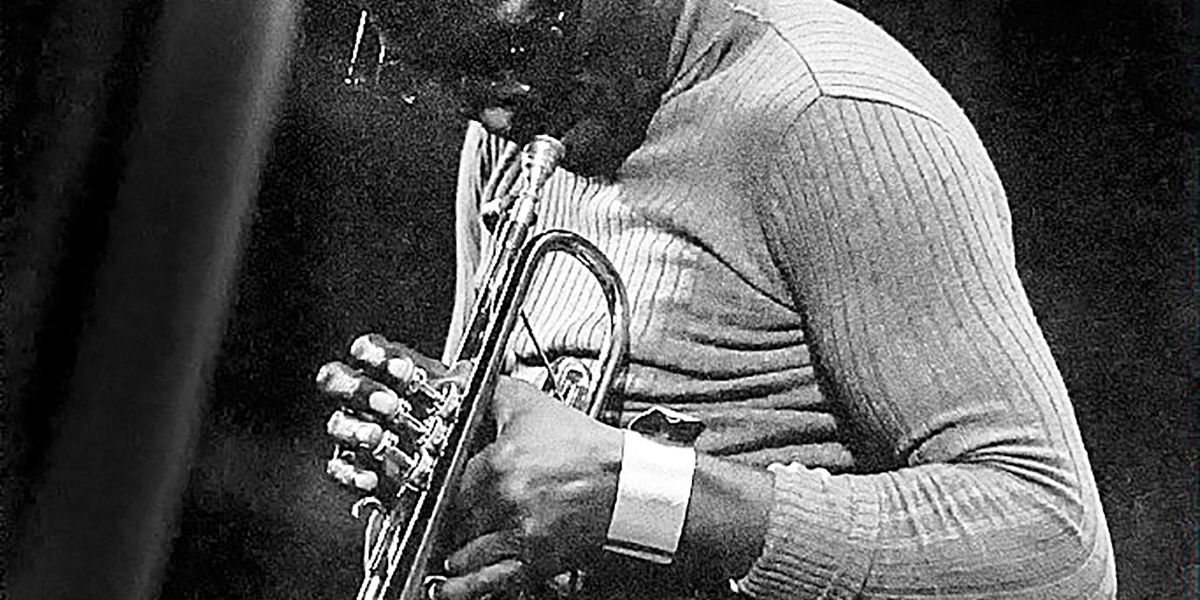 Miles Davis’ 1970 fusion landmark, Bitches Brew, sparked considerable controversy over definitions of jazz. However, a perhaps more important yet overlooked debate questions if Bitches Brew fits within larger Black musical traditions. For the purposes of this essay, I conclude that the album fits within such a tradition, making it not the aberration, including in jazz, that many depict.

Recorded in August 1969,
Bitches Brew is regularly characterized as a launching point for jazz-rock fusion. In addition to its heavy use of contemporary electronics, its success with mainstream audiences suggested to some jazz listeners that Davis had sold out to popular tastes, including those of whites.

Yet others, including cultural critic
Greg Tate, have questioned the idea that Bitches Brew, in the context of Davis’ older work, betrays a Black American tradition. In a Davis obituary in 1991 (found in The Miles Davis Companion: Four Decades of Commentary, edited by Gary Carner, Schirmer Books, 1996), Tate asserts:

From reading this passage, written after Davis had played fusion for over two decades, one could suspect that Tate refers to Davis’ whole career, not just his acoustic phase, as representing and defining a Black American musical tradition. However, Tate soon asserts that Davis’ fusion work, including Bitches Brew, fits his definition of Black American aesthetics. He does not see the music as selling out to popular tastes, unlike many jazz traditionalists:

The funny thing is that as disorienting as that period was for his old fans, Miles stepped into the era of black power politics and hippie rebellion like he’d had a hand in creating it all along. He never seemed like the old jazz hand who was trying to get hip to the Youth and Soul movements of the day. Homeboy came off like he was redefining cool for that generation too.

Tate sees Davis’ move to fusion as a natural progression into a more contemporary style of Black American music. Though he goes on to mention white musicians and genres also influenced by Davis’ later work, he clearly sees Davis as fitting within “black power politics” and “Soul”. two signifiers of 1960s Black culture.

In order to clarify how this music exemplifies the idea of a “black aesthetic” to Tate, defining this term is necessary. Other authors’ characterizations of Black music, in the US and beyond, help illuminate Tate’s ideas. Composer Olly Wilson argues that several key conceptual and musical motifs exist in Black American music. To my ears, at least four apply to Bitches Brew:

There is a tendency to create musical structures in which rhythmic clash or disagreement of accents is the ideal; cross-rhythm and metrical ambiguity are the accepted and expected norm . . . to approach singing or the playing of any instrument in a percussive manner; a manner in which qualitative stress accents are frequently used . . . to create musical forms in which antiphonal or call-and-response musical structures abound . . . [and] to create a high density of musical events within a relatively short musical time frame—a tendency to fill up all of the musical space. (Wilson, “Black Music as an Art Form”, Black Music Research Journal, 1983)

Davis’ album fits these characteristics, but despite its popular success, Bitches Brew, I must note, does not sound like any mainstream popular music in the US from its time. Not only was it ahead of its time in producer Teo Macero’s use of extensive tape editing and loops, but the album also sounds strange and unusually hypnotic a half-century later, especially with its combinations of instruments such as bass clarinet with electric guitars and keyboards. Combining its fitting Wilson’s framework with its use of new technology and ideas, Bitches Brew manages to embody Black musical traditions while moving different music, including jazz, rock, and funk, forward.

Further elaborating on these ideas, in his 1995 book, The Power of Black Music: Interpreting Its History from Africa to the United States (Oxford University Press), musicologist Samuel A. Floyd, Jr., characterizes Bitches Brew in relation to West African musical practices, using a framework of characteristics like Wilson’s:

It was on [Bitches Brew] that Davis expanded his rhythm section into an ersatz African “drum” ensemble [. . .]. It takes only a little reflection, then, to relate this trend to African performance practices in which repetitive patterns, harmonic stasis, little melodic development, a high degree or rhythmic interest, and collective improvisation define the style: recall[ing] West African ritual music making and evok[ing] West African myth through the collectivity of their renderings. So what, on the one hand, is musical evolution—progress toward development and complexity—is, on the other, a return to primeval musical roots and a continuation of ancient practices.

Therefore, with such practices in mind, Bitches Brew exemplifies a Black musical aesthetic for these critics, composers, and musicologists.

However, some critics and scholars, unlike Wilson and Floyd, view Black American music as not marked by specific traits and practices. For such authors, the term “black aesthetic” has greater communal than musical significance. For example, sociologist Barry Shank believes the music’s social and communal function is what marks it as of a specific race. In his essay “From Rice to Ice: The Face of Race in Rock and Pop”, found in The Cambridge Companion to Pop and Rock (edited by Simon Frith, Will Straw, and John Street, Cambridge University Press, 2001), Shank, citing white musicologist Philip Tagg, argues, “The key to unlocking the racial significance in music lies not in specific musical traits but in the social uses to which any popular music is put.”

So, for Shank, Bitches Brew would or would not define a Black aesthetic because of its social and communal functions: whom the music unites for a common cause. Arguably, in this sense, Bitches Brew is not only Black American music because of its success with non-black communities. But with its success in Black communities, the album arguably can still define such an aesthetic.

Tate’s use of the term “black aesthetic” signifies a musical and a communal idea in which Davis’ work fits. I argue this idea because in playwright Larry Neal’s 1968 journal article in The Drama Review, “The Black Arts Movement”, Neal asserts about the concept of a black aesthetic,

The Black Arts Movement is radically opposed to any concept of the artist that alienates him from his community. [. . .] Implicit in [the Movement’s] re-evaluation [or western aesthetics] is the need to develop a “black aesthetic.” [. . .] The motive behind the Black aesthetic is the destruction of the white thing, the destruction of white ideas, and white ways of looking at the world.

In these statements, Neal ties the black aesthetic in the arts to at least one important concept: relating art to Black communities and not those of whites. So, for Tate, Davis defining the Nlack aesthetic signifies, with Neal’s use of the term, Davis’ independence from White artistic sensibilities and his ability to create art that spoke to the needs of Black Americans. Therefore, for Tate, Davis’ art, including Bitches Brew, was authentically of a Black American musical and communal aesthetic.

One important counterargument to Tate comes from authors like the late conservative critic Stanley Crouch. Here and elsewhere in his essay, “Play the Right Thing” (New Republic, 1990, and anthologized in multiple books as “On the Corner: The Sellout of Miles Davis”), Crouch argues that Davis’ fusion work does not fit within a jazz tradition or a larger Black American one:

[W]ith Bitches Brew, Davis was firmly on the path of the sellout. It sold more than any other Davis album, and fully launched jazz-rock with its multiple keyboards, electronic guitars, static beats, and clutter. Davis’s music became progressively trendy and dismal . . .

Crouch also draws conclusions about the racial implications of Davis’ turn to fusion: “Obsessed with remaining young, and therefore willing to follow any trend in pop music, Davis is now a surly sellout who wants his success to seem like a heroic battle against the white world.” He goes on to say,

Gone is the elegant and exigent Afro-American authenticity of the likes of [Duke] Ellington, at ease in the alleys as well as in the palace, replaced by youth culture vulgarity that vandalizes the sweep and substance of Afro-American life. The fall of Davis reflects perhaps the essential failure of contemporary Negro culture: its mock-democratic idea that the elite, too, should lite it down in the gutter.

Crouch implies here that while Davis portrays his music as of an authentic Black aesthetic, one opposed to “the white world”, the music actually panders to commercial tastes, likely of whites. Therefore, for Crouch, Davis’ later work, including Bitches Brew, is not of an authentic Black American musical tradition, but instead a tradition of larger black “youth culture vulgarity” which, similar to Crouch’s views on hip-hop, he views as catering to white caricatures of black life and culture.

To assess the above points, I must consider some of the larger issues raised by ideas like that of “the Black aesthetic”. I agree with Floyd (and Wilson) that the music on Bitches Brew has strong African roots, making it of a Black musical aesthetic. To me the characteristics that they mention arguably make a stronger case for it fitting within a larger Black American music tradition than its community function might: as mentioned earlier, there was a strong white following for Bitches Brew. However, I will concede that black music need not solely appeal to Black communities within this framework to be of a Black aesthetic.

I disagree with Crouch’s arguments that the music is not of a Black aesthetic, instead befitting a rich Black American musical tradition. Crouch’s criteria for defining such an aesthetic are based on a lack of affiliation with “youth culture vulgarity”, which suggests that for him vernacular youth culture(s) cannot be authentically Black.

It is true, however, that Davis’ fusion work may have been partly motivated by economic concerns. By 1969, acoustic jazz was not drawing the audiences that it once did, and as journalist Marc Myers writes in his 2012 social history Why Jazz Happened (University of California Press, reviewed here at PopMatters), the rise of advanced sound and lighting systems for music festivals and arena concerts greatly influenced fusion, helping make it louder and flashier than earlier jazz styles. Davis and others played to larger audiences drawn to their music as a result of such developments.

These seemingly extra-musical factors nonetheless did not make Davis’ work a sellout; again, Bitches Brew was arguably too idiosyncratic, in its own time and beyond, to constitute an unequivocal move towards pop tastes. In contrast with jazz covers of pop hits by the Beatles (also discussed in Why Jazz Happened). For example, Davis and other musicians’ response to the times was much more forcefully angry, even militant in its response to the violence of the turbulent 1960s while still incorporating popular rock instrumentation like electric guitars and drums.

Arguing that Bitches Brew fits in a tradition of Black American music, one embracing change and evolution within the dynamic frameworks that Floyd and others highlight, means that the album is not a sellout and that its use of West African musical practices is not commercial and that the album does not sound like White and (for some) inauthentic Black music.