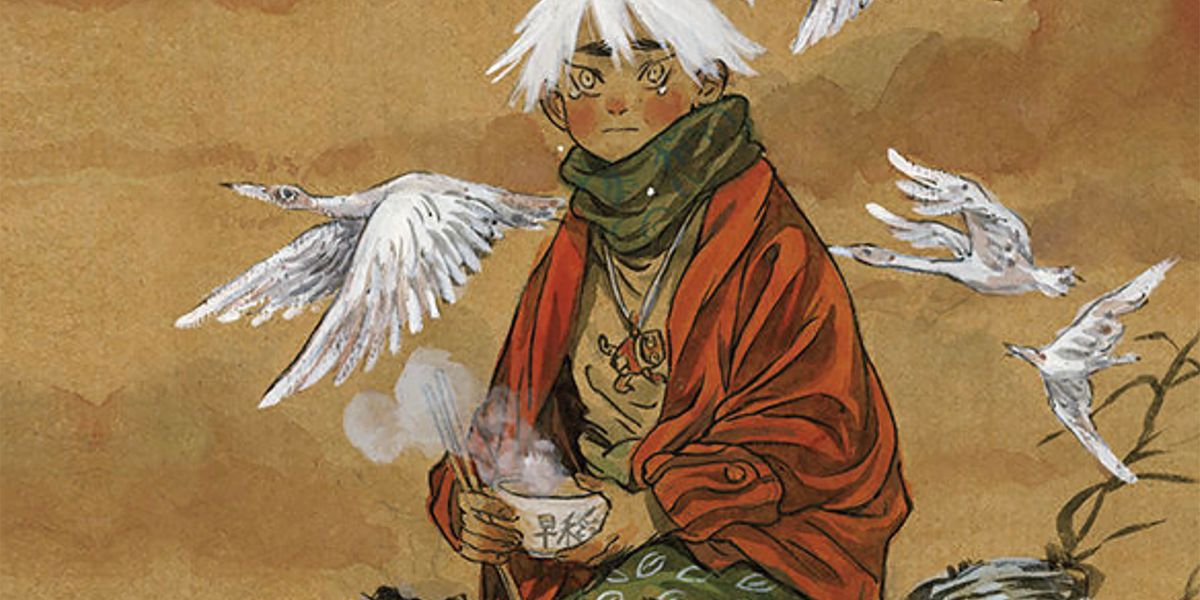 There are few books of which it can be said they’re worth buying for the art alone. Zao Dao’s Cuisine Chinoise is one of them. The graphic novel is packed with “tales of food and life” but with its compelling combination of lush painted pages and unsettling, fable-like storytelling, it’s the eyes and brain which get the true feast here.

Cuisine Chinoise is the first work to appear in translation by Zao Dao, a rising star of the Chinese arts and comics scene who grew up in rural China but whose striking web comics propelled her to national attention by her early 20s. From there she stormed the European comics world, gaining a solid international fan base.

At long last, now English readers can sample her prodigal talent.
Cuisine Chinoise is a stunning English-language debut. The stylized full-colour ink and watercolour illustrations that fill each page are mesmerizing, and the art alone makes the book worth every moment spent on it.

Each panel is literally a feast for the eyes; each page a multi-course meal, each image worth savouring slowly and appreciatively before moving on to the next. It’s rooted in Chinese art styles, but with an experimental avant-garde twist. Classic images are stylized in innovative and gorgeous ways and deposited into the narrative in creative fashion. One also detects influences of manga and bande-dessinée.

But Dao has crafted a unique style all her own: packed with dense, breathtaking scale yet expressed in seemingly casual brushstroke. The style is audacious, proud, compelling the reader to take it seriously as something more than just comics. Yet the narrative in turn renders its illustrated pages more alive, more fluid and provocative than art on canvas.

The tales themselves are more oblique than the art, their meanings lurking evasively between and betwixt the stunning images. They have a fable-like quality, a zen abstraction which renders meaning malleable and interpretation fluid, subjective.

The characters they depict are outsiders, existing on the margins – whether hungry spirits seeking sustenance or poverty stricken humans on the edge of losing everything. If there’s a recurring message, it’s a reminder to value and appreciate the things we have, and to find joy and beauty in the unexpected (fish guts, lotus seeds, the corpses of insects).

In one of the more straightforward exemplars, young chef Hai Zi hews to his own creative drive, crafting unusual dishes for which he’s reviled and made fun of. Under pressure to either conform and serve standard meals, or give it all up and pursue a different career, he refuses to abandon the craft he loves even as his family sinks into poverty.

His determination pays off when he’s visited by two death spirits coming to collect his ailing father. He eagerly plies them with his creations, and finally finds customers who appreciate them – so much so, in fact, that they spare his father and become regulars. How fortunate for everyone that he stuck with it.

Few of the stories are as straightforward. They’re surreal, avant-garde tales, full of glimpses of partial meaning, replete with symbolism embedded in the food and elsewhere. The stories are both dark and whimsical, and wildly open to interpretation. Normally, evasive texts can render a comic inscrutable, but in this case they strike just the right balance of the surreal and the fable. Above all, they’re carried by the luscious art.

The stunning quality of the art cannot be overemphasized. Even as a collection of sketches the book would be worth picking up, but by combining them into graphic narrative Dao gives the panels movement, bringing them to life in a way a book of static illustrations could not. That’s what food is, isn’t it – a piece of beauty, a crafted work of art, but one that is constantly in motion? What are dishes but sets of disparate ingredients whose creative combinations and transformations are a reflection of their creator’s skill; whose end goal is consumption and yet further transformation?

Indeed, food and art are close kin, and Dao channels their parallel energies onto the page. Graphic narrative is the perfect medium for these depictions of the intersection of food and life, and for musing on the parallels of food and art.

Unlike a delightful meal, the book can be repeatedly enjoyed, and it’s one of those works that offers new meanings with each read. New images emerge, creative juxtapositions of metaphor and symbol. Some stories omit text entirely – like sampling indulgent side-dishes that prove filling unto themselves.

The English translation comes to us via the French – an atypical route, note translators Brandon Kandor and Diana Schutz. They take time at the end of the book to observe and correct errors made during the book’s first translation from Chinese into French.

But if this is the route it takes for the Anglophone world to experience Zao Dao, we can’t complain. She has produced what is hands down the most gorgeous book of graphic narrative released this year. The provocative stories are the icing on the cake, and the combination is a sumptuous delight; a must-read for any gastronome of graphic literature.