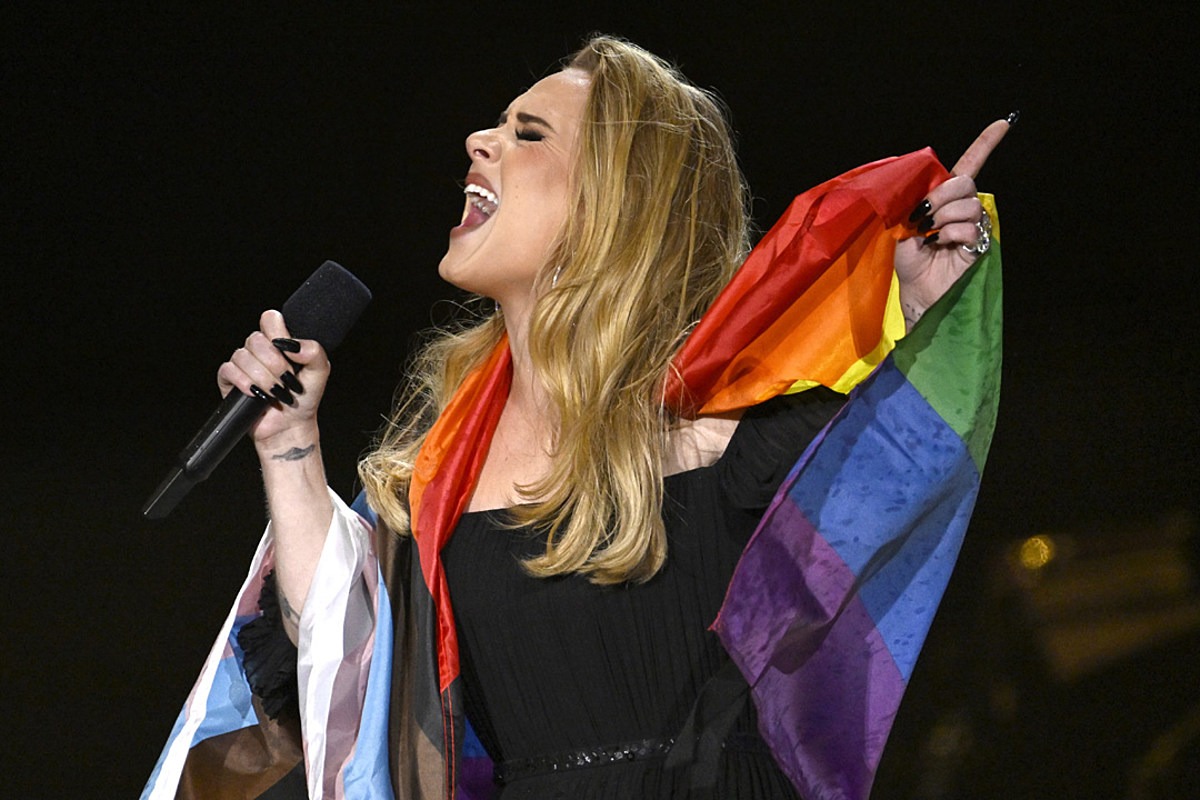 A fan took to Twitter to document his experience after Adele borrowed his Pride flag for a concert over the weekend.

The "Hello" superstar took the stage in London for a series of festival performances in Hyde Park. The shows corresponded with Pride, and Adele was apparently looking for a Pride flag to use during her set.

In a heartwarming thread about "the most random night of my life," Twitter user @DeanWilliam said that the legendary singer's team spotted him in the audience with a flag wrapped around his shoulders and asked to borrow it.

He originally had a general admission ticket for the show, but he and a friend had their tickets upgraded after he agreed to loan the flag. The pair were enjoying the festival in the luxury of the Diamond VIP section when Adele surprised them with an even more impressive upgrade.

"After two songs the MOST BIZARRE moment of my life happened," he wrote. "[Adele], in front of 65,000 people asks where Jack and Dean are and calls us over the barrier!" He said that hit-maker "wanted to give us the best seats in the house."

The duo got to watch up close and personal, and the night continued to get better. Adele performed "When We Were Young" while wrapped in the loaned flag. "I cried," he wrote about the emotional experience.

"To end the most magical, perfect, mind-blowing pride [Adele] sung Love Is A Game, looked at us directly in the eyes and blew us a kiss," @DeanWilliam said. "I'll never forget this night and this pride."

While the Twitter user didn't initially have a video of the moment Adele called him and his friend closer to the stage, he said that someone sent one his way. Check out his thread and watch the clip below:

Adele included a photo of herself wrapped in a Pride flag in a series of photos on Instagram after her weekend of performances.

"My heart is absolutely full!! I’ll never forget these shows with you, slap bang in the middle of London, outdoors, during Pride weekend," she wrote in the accompanying caption. The "Easy On Me" singer thanked her team, fans and everyone involved.

Check out the pics below:

Why Does Everyone Love Adele?

If there’s one fact that can be basically agreed upon, it’s that Adele is universally considered a treasure. The singer is one of the few sure things in the music industry, raking in awards, breaking all kinds of records and establishing herself in a class all her own ever since the release of her debut single, “Hometown Glory,” back in 2008.
Below, we’ve rounded up all the reasons the iconic Adele is so universally adored, from her undeniable voice and talent to her unrivaled sense of humor and unique place in the pantheon of 21st century celebs.