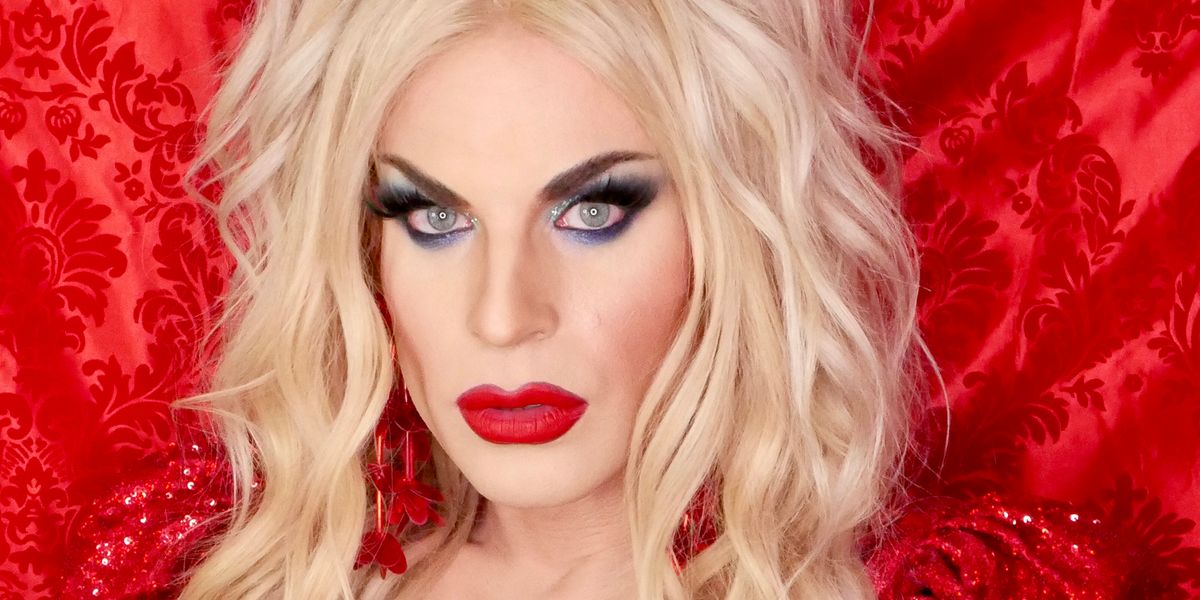 The synthpads come in, slowly and calmly. You are at peace. It sounds like a Windham Hill record, even. Soon, you are greeted by a calming, deep voice. It’s the voice of Katya, a Boston-born drag queen who has a known penchant for both grindcore metal and Russian pop music in equal measure. On the nearly seven-minute guided meditation of “Be Your Own Dentist”, the closing spoken word track to her first-ever album, she asks that you slowly unwind and follow her simple instructions. “I know you’ve been feeling a lot of stress and frustration lately, so I’m happy that you’ve taken some time to relax and reset,” she coos. “You won’t need anything special for this exercise other than your body, your breath, and some stainless steel slip-joint pliers that you can set aside for now.”

As the track unspools, the synths barely move, keeping you in a meditative state while Katya guides the listener on how to quietly remove all of their teeth from the comfort of their own home. This is the world of Katya, and it is — as it always has been — absolutely uncompromising.

“If you look on YouTube, just the quantity of ASMR and Gamma Wave Sleep videos is staggering,” Katya (real name Brian McCook) opines, speaking to PopMatters shortly before the release of her debut EP, Vampire Fitness. “It’s just insane. Millions and millions of views. It’s so clear that people have a hard time sleeping. I downloaded that Calm app because I was having trouble getting to sleep, and it’s funny. It didn’t help me sleep, but I really enjoyed the stories. I wanted [‘Be Your Own Dentist’] to be longer. It ended up being around seven minutes, but I wanted it to be like ten or 15, but — that’s not really a thing. It was so fun to record. I could do that all day long.”

As a fledgling drag performer who happened to be fluent in Russian and French (and was a dynamite gymnast), Katya gained a following in her native Boston with her offbeat sense of humor and love of all things Russian pop. After appearing on Season Seven of RuPaul’s Drag Race (as well as its second iteration of All-Stars) and endearing herself to a global audience with both her absurdist humor and her moments of profound vulnerability, she quickly launched herself into a new realm of fame. She acted in films and TV shows (including this year’s beautiful gay romance on Hulu Love, Victor), filmed comedy bits for Netflix and indulges in numerous creative endeavors with her fellow Drag Race alum Trixie Mattel, which this year alone included the release of a satirical self-help book and the continuation of their otherworldy YouTube show Unhhhh. Katya once described it as “post-verbal”.

Yet while many cast members from Drag Race frequently pivot their brand to unleash largely-forgettable dance-pop records, Katya is very much following her own muse. Having worked on songs for over two years with a small production team, Katya has managed to assemble a deeply weird record that is short on the dance-pop and heavy on wild, borderline-atonal electronic experiments that sound closer to PC Music and Aphex Twin than they do any RuPaul number. Katya indeed sings on the record, but her voice is often distorted to sound like a satanic robot. One of the most clearly-heard words on the whole record is during the bubbly “Ding Dong!” when you can catch her pronouncing “Pacoima” as sensually as possible.

“It was originally going to have eight songs on it like a full album,” she tells us. “There was a song in Latin too! There was a song in Latin, and there was a song in Sanskrit. The dead languages were cut. Then I went crazy, had to go to the cuckoo farm for a little bit, then just kind of put it on the shelf, then came back to it in quarantine. I’m so glad we did that because, as I think with music especially, I don’t need a lot of time to let things settle when it’s visual: it’s pretty clear and decisive in the moment of what is good and what will last.

“When it comes to music, I think the timing is very very important, [as] sometimes you listen to something and go ‘I don’t really like that right now, but in a month maybe I will,'” she continues. “It’s happened with artists like Lana Del Rey, for example. Songs will grow on you, and then the album will shift and change, and the tracklist will migrate, and certain songs will fall away, and others will come front and center. I’m so glad we had a lot of time because the songs I liked, in the beginning, are the songs I really liked when we came back to it. I’m relatively sure that I’m not going to hate this in a year.”

Opening with thundering club workout “Come in Brazil”, a duet with one of the most successful drag music stars of recent history, Alaska Thunderfuck, the album careens wildly between different moods. “ГЛАЗ (EYE)” giving us distorted and choir-backed hyperpop that wouldn’t feel too out of place in a 100 Gecs playlist. Meanwhile, the dynamic “Ravioli” isn’t afraid to bring in venomous rock guitars that hew closer to full-on industrial rock. Vampire Fitness is designed to be humorous, but the musical backbone for all of these songs is so far removed from the expected “drag queen template” that it may very well jar even some of Katya’s most ardent fans.

“The only thing that I struggled with a little bit was the length of the songs,” Katya admits when asked if she had to compromise anything for the sake of market viability. “For some reason, I just thought, ‘Oh, a song is four minutes long.’ As like, an average, right? It’s a pop song: anywhere from three-and-a-half minutes to five minutes. Five minutes is a little long, three-and-a-half minutes is a little short. So if I was like four, four-twenty, four-thirty, that’s like the sweet spot. And [the response] was ‘Nope!’ The producers were like ‘No, that’s not it.’

“I remember when we got the final edit before we mastered ‘Ravioli’, I was like ‘This is amazing!’ and then it ended, and I was like ‘What? We’re ending it right there?’ Originally that song, before we laid the vocals down, it was about four minutes, and we ended up cutting so much. I was like, ‘Oh, but … I want to make it longer.’ It was a big surprise. But that was it. Nothing like ‘This is too weird’ or ‘This is too strange.’ If anything, we ended up making the things a bit less commercial. ‘Come in Brazil’ I feel like is ‘a song.’ The structure of it is really easy to understand and easy to listen to. And I was like, ‘OK, we have a song: we don’t need to do that again.’ Especially for this, we’re not trying to do anything. There’s no place to get or thing to achieve or point to make, so what’s the point in trying to make it accessible? I just wanted it to be enjoyable for me, and if that’s the case, then we’re good.”

Yet even before she shot to fame on national television, Katya was heavily involved in the Boston drag scene. She even made friends with a Boston punk outfit named The Electric Street Queens, with Katya making appearances in more than one of their music videos. “They’re friends,” Katya notes. “They were like ‘Do you want to be in a video?’ and I was like ‘Yeah.’ And I think there have been some fun projects like that where I remember me and another queen from Boston called Phina Barbital, we danced at a show. It was like a — not death-metal — but a sludge-metal band, and we smashed stuff over our head and whipped our hair around for the whole night, and I remember the next day feeling like I’ve broken my neck.

“My experience with music is a little bit different than the typical RuGirl, where I don’t like bow down to the divas — it’s not really my world,” she continues. “I was trying to think of the first concert I went to, and it was in Worcester, Massachusetts, the Electric Hellfire Club, and it was some weird satanic band. I remember I got really scared because I heard that the singer whips the audience. He has a bullwhip. When I got there, and he did it during the song, it was not that crazy. He did give a warning before he did it, so it wasn’t as chaotic as I thought. But it was still kind of scary. That’s the kind of stuff I like: I grew up listening to goth and industrial music, so I wanted to do something a little bit more in that neighborhood.”

In that vein, tracks like “Ravioli” hit as hard as they do largely because of Katya’s own distinct musical roots. “There’s a song I’m still totally obsessed with,” Katya starts when pressed on her heavier influences. “I’ve loved this band called Front Line Assembly for a long time. They’re an industrial band. I think recently — in the past 25 years ago or something? — [they] did an album calledAirMech that I think is even a soundtrack for some crazy high-tech war game. Anyways, they have this song called ‘Prep for Combat’ that’s just so so — like, visceral. Energizing! It just makes my blood boil in the most lovely way. It gets dark and sludgy. I wanted to do something that maybe sounded like a séance that turned into an orgy.”

While Katya has built up a brand on being outspoken and off-kilter, one thing she’s not overly concerned about is alienating anyone with how intense Vampire Fitness is. When pressed on the response to it — including how the track “Ding Dong!” is a straight-up parody of the already-absurdist Loboda & Pharaoh number “Boom Boom” — she notes how she is absolutely at peace with how the record will be received.

“Trixie listened to it,” she tells us. “When we went in to record her little part for ‘Ding Dong!’ she listened to the whole thing, and she said, ‘Well, I’ve certainly never heard anything like it.’ I felt like that was a really great thing to say, as she knows music very well. So far, it’s been positive, and it’s one of those things where you can’t get too precious about people liking your music because it’s music. To be honest, I don’t really like Trixie’s music. I identify that it’s good, but I don’t go crazy for male vocals; that’s a big barrier for me. Ninety-nine percent of the songs I listen to, if they have vocals, they’re female. I’d be more concerned about people thinking it was stupid or hack or a rip-off. That’s the only criticism I’m tuned to.”

If Katya’s musical ventures accomplish anything, it may very well be sparking interest in the Russian pop history she knows so well, starting with the flagrantly sex-positive and unspeakably catchy pop sounds of Loboda. “I only discovered her like a year ago, and I love her so much,” notes Katya of her Loboda obsession. “I get fixated, and I get tunnel vision, so I always need to expand my musical radar. But she’s the person I’m completely up to date on and know every one of her songs and every one of her videos and am on her Instagram and looking at what she’s wearing. I’m obsessed with the older ones too, the older pop divas, like Alla Pugacheva and Irina Allegrova, where they’re now in their 60s maybe and have like raspy smoker voices but still sing a little bit. It sounds like [makes monster noises].”