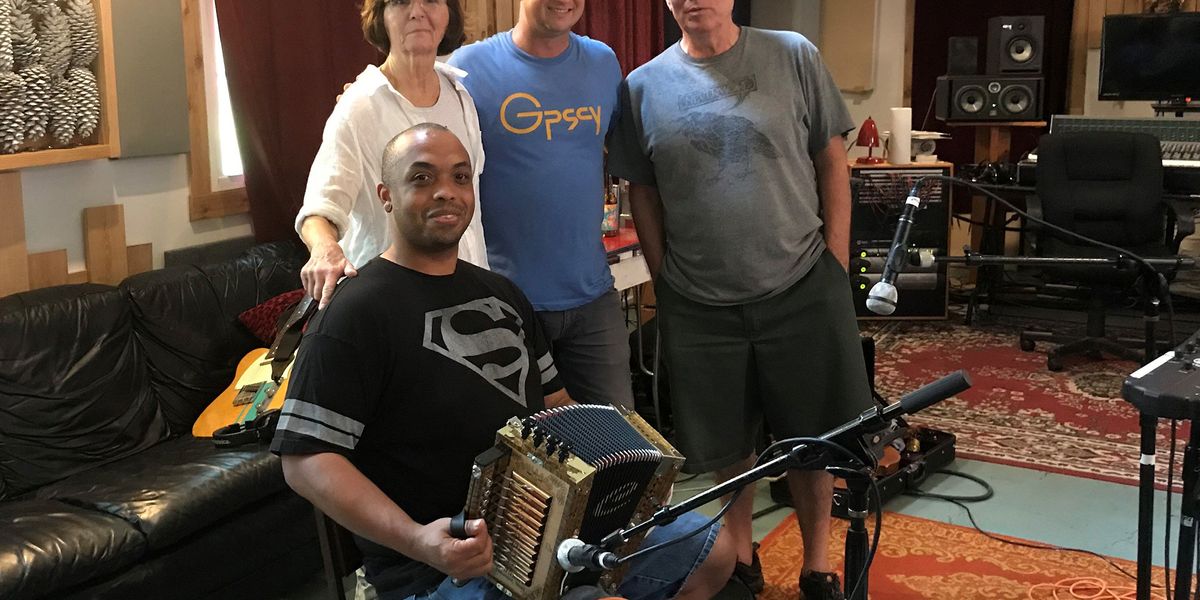 “La chanson des moustiques (The Mosquito Song)” is the new song by Debbie LaGrange, backed by Michot’s Melody Makers: Louis Michot (who wrote the music), Bryan Webre and Kirkland Middleton joined by special guest, Zydeco legend Corey Ledet. The song supports Michot’s mission of keeping the unique heritage of Louisiana alive and bolstering interest in Cajun French. It’s also a triumph for LaGrange, a former operating room nurse diagnosed with Parkinson’s disease in 1999. Since that time, LaGrange has found songwriting and a kindred spirit in Michot.

“On the day we recorded, Louis had me take my place at the microphone, I thought I’d died,” says LaGrange, “because the Nina Highway Louisiana studio of the famous, Mark Bingham, surely felt like heaven. Mark, close by and keeping watch as his angels, Louis Michot, Bryan Webre, Kirkland Middleton, and the unbelievably talented, Corey Ledet, did their thing.”

The combination of Michot’s unique musicality, marrying tradition with the contemporary, and LaGrange’s inimitable vocal performance results in something both entertaining and uplifting. It’s a celebration of a place that remains as mysterious and important to American heritage as ever.

LaGrange shared some of her thoughts on her music, living with Parkinson’s disease, and her collaborators via email with PopMatters.

Tell me about how you came to know Louis Michot?

My husband died in 2006. I began to pal around with George Marks, a painter who had recently moved back to our hometown, Arnaudville, Louisiana, to establish NUNU, an artist’s cooperative.

True story: George and I were having lunch at NUNU discussing the idea of adding music to the schedule at the cooperative when Kevin Murphy, just in from Rhode Island, and Don Carpenter, originally from Morgan City, Louisiana, more recently from New England and points yonder, walked through the door and introduced themselves. Don had recently moved to Arnaudville. Kevin was on the hunt for land where he would eventually build his home.

We filed into my car, and as we were driving off to showcase suitable sites for Kevin, I asked, “Hey guys, what do y’all do for a living?” In one voice, they answered, “We’re musicians!” I let go of the steering wheel and leaned toward George, where the guys couldn’t see my hands, then pretended to reel in a prized catch! I returned the twinkle in George’s eye! As luck would have it, Kevin and Don would be instrumental in getting the best bands and acclaimed musical talents to come and play on what would become the new NUNU music stage. Louis Michot was one of those talented performers.

During the first six months, we packed the house with musicians, dancers, and prancers, the serious, the curious, the good, the bad, and the ugly. What a melee! Art and artists met Arnaudville!

For the rest of the next ten years, music-loving Cajuns, cousins and curmudgeons, new residents who tasted the Kool-Aid and liked the way we spiked their drinks returned over and over and over again to dance, dine, argue, debate, and conversate! Through all of it we made new friends and welcomed returning guests from all manner of places in the US of A and around the world! What a mind-blowing experience!

You haven’t been blessed with musical bliss until you’ve been baptized by fire flashing from an explosion of dueling fiddles, burning up from the searing touch of Mitch Reed and Louis Michot while going up against the Master of Creole Thunder, Joe Hall! We repeatedly watched the frenetic trio feed us their talent as bait, always with a weight of risk, getting squeezed between the big bellows of Joe’s massive accordion that he maniacally mashes while those twin engines frantically answer this great and gifted hot-peppered musical beast, their bows bending to a hell grinding generation of a steady, ever-ready electric heat equaling a 100 percent pure Creole French melodic beat!

It wasn’t until exactly a year ago in August 2019 that Louis and I got to know each other better. I’d already finished writing the lyrics to “La Chanson des Moustiques (The Mosquito Song)”, and Louis had agreed to write music when I approached him again about shooting a video to go along with the song. I told him that it was my hope that the song and video would boost sales for my newly designed t-shirts sold through my website, mosquitotees.com The motto on the bottom of every page reads: “Keeping Cajun French alive one t-shirt at a time!”

He thought that was a good idea and put me in touch with Worklight Pictures, including the talented videographer, Bruno Doria, and his Partners, Ben Usie and Lauren Hemard. We shot that video last August.

Louis told me that it was Bruno, Lauren, and Ben who filmed his and his Grammy-winning band, the Lost Bayou Ramblers’ newly released En Va Continuer documentary about keeping Cajun French alive. It was at that crossing of our relationship that Louis and I realized we had more in common than music alone. We both have a love and deep respect for the local dialects we call Cajun and Creole French. Both of us have vowed to do everything we can to preserve these native tongues of our forebears.

Louis has agreed to write music for another one of my French lyrics. This one is going to be extra special. That’s all I’ve got to say about that. Eventually, both Kevin and Louis moved to Arnaudville. Kevin now lives in New Orleans, where pre-COVID-19, he played regularly with his blues band, the Tempted, at Balcony Music Club and House of Blues. Louis, Ashlee, and their three sons and Don and Karen Sellers continue to live here in Arnaudville. Louis, doing his thing. Don, singing, playing accordion and guitar, Karen beating her drum to the wonderful sound they all still-strum-out on our sacred NUNU Stage!

Like so many people from all over the US, they tasted from our overflowing well of musical and culinary festivity and fell under that melodically delicious and tempting spell of our yesterday’s, today’s, and forever special, Cajun Creole Zydeco Country Stew.

Parkinson’s disease played a role in your becoming a songwriter. What can you tell me about that?

Believe it or not, I do have one good thing to say about Parkinson’s disease. It’s because of that bugger of a beast that I had so much time on my hands when George Marks entered my life. Although I hadn’t yet been diagnosed with the illness, it was indeed the symptoms of PD that forced me to give up my life’s work as an operating room nurse in January of 2000. I wouldn’t get a diagnosis until 2010. George moved back to Arnaudville in 2002. We opened the doors of NUNU to the public in 2005, the year before my husband died.

From the time I quit work in 2000 until the time I seriously started carousing with George, after Ronnie’s death, in 2006, my time was spent inside operating rooms under many knives, guided by the steady and skillful hand of my orthopedic surgeon, Dr. Angela Mayeux, of Lafayette LA, and outside that surgical suite, following the directions of my well trained physical therapist.

I kept swimming to survive. It took a devastating motorcycle accident in my junior year of high school and years of back-breaking labor in all of the operating rooms I ever worked in, and the nonstop painful pull of contracting muscles caused by a dopamine depleted brain due to PD, to mangle and tangle my 5’6″ frame!

It would take ten years and 12 operations to almost straighten my once perfect, never to be again, tired and aching body. When I returned home from the last of my operations, repair of a torn ligament in my already badly damaged right knee, my sons finally had the answer to that ever-elusive question they had been asking doctors for all these years, “What’s wrong with Momma?”

Dr. Mayeux had finally cracked the code and delivered the heart-stopping news to my oldest son as she walked him outside the family waiting room to tell him that my knee surgery had gone just as she suspected it would, perfectly! The surgery was a success; the patient died. Angela delivered to me, the already broken news, two weeks later, when I returned to her office for my first postop visit: Parkinson’s Disease.

I had two choices. I used up both. I wallowed for a while, pretty badly. Dying isn’t easy. Death can’t be summoned up on a whim. It takes its sweet time. Death revolves around its own grim grind. And then, one day I woke up to my right mind counting down borrowed time, ready to rewrite my business of a new kind of life! I was finally given corrected medication by my old friend, Paul Rees MD, that woke up my senses and made it possible to smell all of those roses again.

I was gifted a short while later by my new friend, Kevin Murphy, with Tom Petty’s latest music marathon MOJO! My hands shaking with this newly discovered anticipation of maybe, once again, feeling the beat that is the heart and the heat of everyone’s song.

I almost ran into my grandson’s playroom where his jambox was all ready to take me on my first musical journey since the bad news. I slid in the CD and quickly hit play! Tom began to sing, and I started a shimmy shakedown that I could’ve parlayed into big money dancing in booth Number One at the Galloping Jugs in Carencro, Louisiana, had it not burnt to a crisp years ago.

My new business for life defined, the music and madness of NUNU and a whole bunch of brand-new partners in crime from all over the world! I started dreaming new dreams. Songwriting was one of them. Songwriting clears my mind of everything else, including Parkinson’s disease. Along with family and friends, it saved my life!