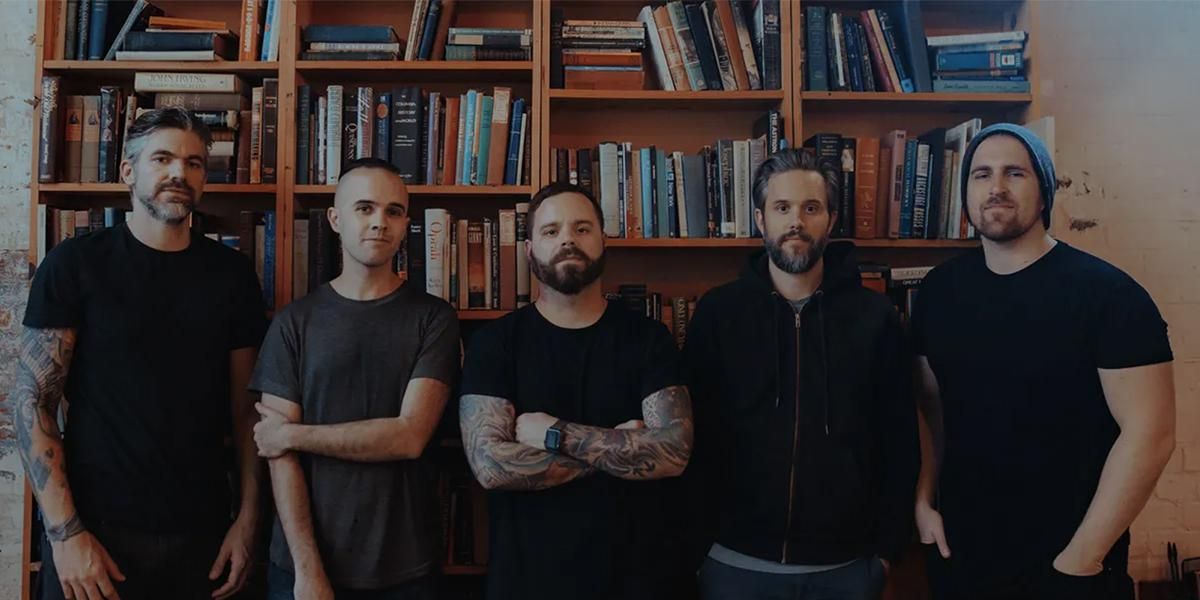 As 2020 drew to a close, Craft Recordings’ yearlong Between the Buried and Me remaster and vinyl reissue project arrived at 2007’s Colors, their fourth and most significant album. This was the record that brought the band more attention outside of the world of heavy metal. It led to a slot on Prog Nation, a package tour put together by progressive metal titans Dream Theater. And it was so consequential in expanding their audience that the band rarely reach back to those first three albums when putting together live setlists these days.

In a way, Colors culminated in what the band had been building over the early part of their career. Even going back to their debut, Between the Buried and Me had included quieter sections and occasional odd musical digressions amongst their pummeling riffs and screamed vocals. By the time their third album, Alaska, arrived along with new members guitarist Dustie Waring, drummer Blake Richardson, and bassist Dan Briggs, the band were pushing into new musical territory. To that point, the album finished out with the quiet, folk-cum-lite jazz jam “Laser Speed”.

Colors begins just as softly. “Foam Born (A) The Backtrack” opens with a simple piano introduction and sweetly sung lyrics from Tommy Rogers. “I’ll just keep waiting / You’ll just keep waiting / In the cold…” This only lasts for about 50 seconds before the band comes in, pounding away on major key power chords, Weezer-style. Rogers comes in with a bright, arpeggiated synth solo, but by the 1:40 mark, the band transition to something darker and heavier, and Rogers is shouting his head off by the time the music moves on to “Form Born (B) The Decade of Statues”.

“Statues” may be the portion of Colors that most closely resembles the band’s earlier material, but even it has musical curveballs. It starts brutally, but the first clean vocal section includes synths and a heavy but melodic guitar riff and lead that resembles Dream Theater. Even the blast beats and crushing doom metal section two-thirds of the way through the song give way to a short, clean guitar bit accompanied by simple rimshots. The Dream Theater-esque section returns to close out “Statues” and push into “Informal Gluttony”.

One of the interesting things about this album is that it’s really just one 64-minute musical piece. It’s divided into eight separate tracks, but even that is sometimes seemingly arbitrary. “Informal Gluttony” begins and ends with booming tribal-style drum work from Richardson, but that isn’t the case with the pieces that come before and after. The “Foam Born” tracks have different feels, but there isn’t a clear line between parts A and B. And “Sun of Nothing” and “Ants of the Sky” has an even more random division as if the band just had a 24-minute long chunk of music and cut it in half at the 11-minute mark.

“Sun of Nothing” and “Ants of the Sky” are the centerpiece of the album. It’s the part where the band lets loose, throwing in a myriad of unusual but rewarding detours that resemble nothing else in their earlier catalog. “Sun of Nothing” begins like it’s going to be a return to punishing form after “Informal Gluttony” featured Middle Eastern-inspired guitar solos and a slow and heavy but melodic chorus. But Between the Buried and Me weren’t interested in just being brutal at this point. So after two minutes of heaviness, there’s a chiming acoustic guitar break. From here, the floodgates open as the band returns to chugging guitars and pounding drums but keeps drifting into other styles, such as the singsongy piano break that’s has Rogers cartoonishly singing “la la la la / la di-da”. Or when the technical guitar duet suddenly brightens up into something that feints at a heavy metal take on Pachelbel’s “Canon in D”.

Eventually, Between the Buried and Me go whole hog into proggy soft-rock, with melodic bass, cleanly strummed guitars, and even claves clicking in the background. That leads into a melancholy chorus, “I’m floating towards the sun / The sun of nothing.” They push it into a big, catchy heavy finish that winds its way back into Rogers growling. The music gets chaotic as “Ants of the Sky” takes over, quickly moving into a completely different melodic guitar duet. The duet stops cold for a piano break, and the band go full-on into the Palchelbel-style section they only hinted at earlier. “Ants” also features a groovy organ-led detour, a quiet, clean guitar and piano section accompanied by martial snare drumming, and a jaw-dropping final five minutes.

These five minutes find the music transitioning from typical heavy riffage and screaming into a soft, tension-filled, spacey guitar theme with slowly pounding snare drum pushing the band into the chorus. Rogers sings “Sleep on / Fly on / In your mind / You can fly” while screaming “Sleeeeeep ooooooonnnn” in the background. The combination of the two vocal styles is excellent and leads into the dark post-chorus, dominated by clean vocals and drums. The group slide into a bluesy guitar solo, which then brightens into another solo that’s so light and airy that Between the Buried and Me suddenly sound like they’re in the middle of a Phish jam. That leads into the album’s most unexpected moment, as crowd noise from a bar leaks into the mix and the band is playing bluegrass, complete with a banjo riff and an acoustic guitar solo. The song wraps up by returning to the Pachelbel-esque melody, but with Rogers screaming in the background (and triumphant trumpet blasts, something I had never noticed until hearing this remastered edition).

This would be enough for most albums, but Colors is only 2/3 done at this point. “Prequel to the Sequel” comes next with its opening major key guitar heroics, eventually being overlayed with Rogers’ screaming, an unusual combination that’s highly effective. “Prequel” is probably the heaviest bit of the second half of the album, but even it includes a bizarre, accordion-driven drunken sea chantey interlude. The band gives themselves a break with the chilled-out “Viridian”, which also provides bassist Dan Briggs the spotlight with an honest-to-goodness solo.

“White Walls”, at the epic length of 14 minutes, closes out the record. It features some of the album’s catchiest guitar riffs, as well as plenty more chugging heaviness, and Rogers once again demonstrating his facility with growling, screaming, and melodic singing. The mid-song build from a nearly dead stop with just synth washes and barely-there picked guitar to full band finale is hugely effective. In particular, Rogers’ chanting of “Get out of this closed-off circle” from a whisper to a roar is one of his best moments. As the song winds its way to the big finish, Rogers repeatedly growls, “We will be remembered / For this”, a statement that proved to be prescient. The album climaxes with guitar pyrotechnics from Waggoner and Waring, dueting both melodically and with fleet-fingered solos, as Richardson’s drum fills get more and more complicated. One more run through a variation, the Pachelbel melody pops up as the last electric moment before it all fades away. At this point, Rogers’ solo piano returns to close out the album in a way very similar to how it began.