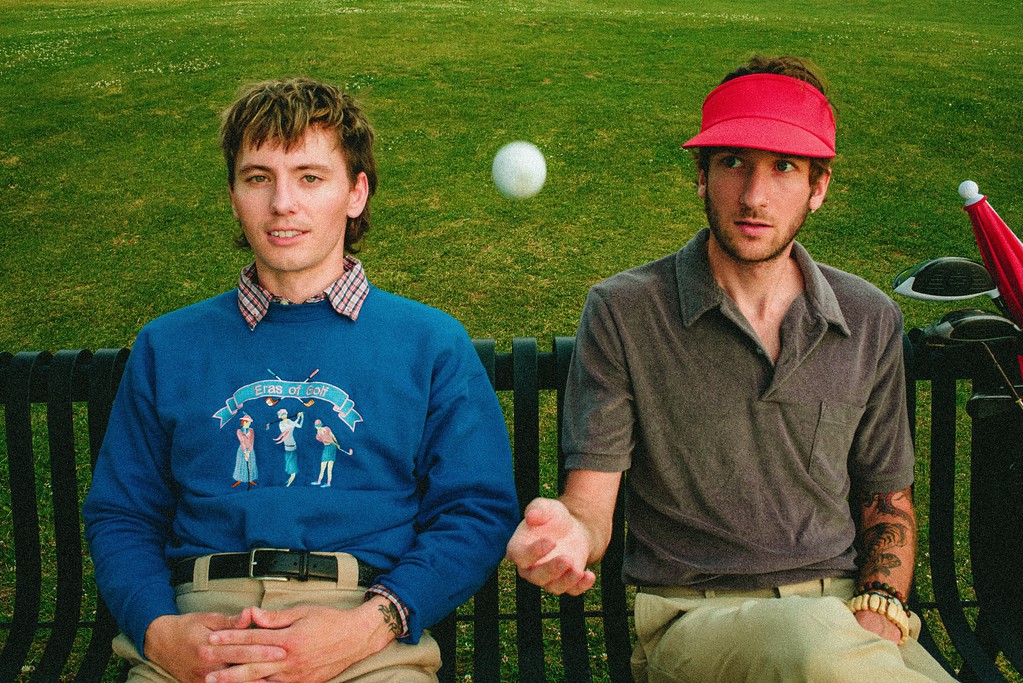 Super American’s gearing up to release one of the best pop-punk albums in years. After their feel-good Tequila Sunrise, the band regrouped by supersizing everything. The result is SUP, an absolute masterclass in writing stadium-sized earworm hooks, witty and occasionally laugh-out-loud funny lyrics, and riffs that’d make ’90s Green Day jealous. We spoke with the band via email, and multi-instrumentalist Pat Feely answered the odd numbered questions, while multi-instrumentalist Matt Cox answered the evens – so the band traded off questions just like they trade off singing on the new record.
How have you been doing throughout the pandemic? How have you been staying sane?
The beginning was quite scary and weird.  Then I got into a nice little groove staying home and felt protected from the outside world because I didn’t have any social obligations – or really any obligations for that matter.  I spent time rediscovering music I used to love and doing the dishes and trying to learn things here and there, played a lot of golf.  Then after a while I got excited because i could go to my favorite restaurants again… and just when I thought we were in the clear, I got very sick with COVID.  Thankfully I recovered.  A month later I got vaxxed.  Now I’m anxious to go on tour and play in rooms full of people.  As I type this I’m realizing I’ve gone through so many phases during this period that I’d probably keep you here all day, so I won’t do that.
How long has the album been done? I know “Hot Dog” and “How Big Is Your Brain?” have both been out for a couple of years.
The album has been “done” done in its current audible state for about a year. We started making it in 2019, then started recording it in the beginning of 2020 — pandemic hits — then we finished it about this time last year.  “Hot Dog” is a song that actually even precedes our previous album, like 2016.  But we’ve incorporated it into our live set sparingly and played around with it in a few different styles and ultimately it snuck its way on.  It’s been the orphan of our catalogue. “How Big Is Your Brain?” is actually one of the first songs we made when making songs for what eventually became SUP, and we released it as a single last year.  I’m glad both made the album because they feel like chaperones for the 8 new pupils.
How different was the writing process for this album versus Tequila Sunrise?
I think the main difference was we worked on more songs together from scratch. Sometimes we would show up with no idea what we were going to do and make something up, which is exciting, as opposed to it being more solitary and laboring over our own ideas at home.  We wanted the final product to feel a bit more cohesive so we were writing with that in mind.
Songs seem to have more trade off vocals on this album than that one. On here you both will frequently sing on the same track, whereas on that one you each sang your own songs. How did that change come about?
I think we just wanted to keep evolving on our work and play with new dynamics.  The more and more we grow, we continue find exciting ways to create unique moments that hopefully connect with folks in a variety of ways.
What do you want people to take away from SUP?
Just hope it sounds honest and that it feels “necessary.” I have this fear of putting things out that waste people’s time and simply don’t need to exist. So hopefully it’s the opposite of that!  I guess the dream is to give somebody something they can put on in the car and enjoy with their friends, or have in their ears while they’re walking alone through the city or laying on a beach somewhere. I hope people can take moments from it that they can hold onto if they need it and share with others.
Do you have any favorite songs?
Sincerely don’t have a true favorite, but there are moments I really enjoy. “Relax + Float,” “Greetings,” and “fuck it!!!!” were all really fun to make.  The time spent generally exploring in between making songs is also really fun.  Imagination is holistic as long as you let it.  So a favorite is really tough to say — each song in itself is, I guess, a challenge.  And I feel we embraced each song for what it was, and that’s probably what I’m most proud of.
Who is Jeff?
I don’t know where the name came from but I had this idea for a song. Jeff is the little voice in your head that’s always telling you you have to be anything other than yourself to be worthy of love. That you have to control the outcome of every situation or it will go terribly bad and you will most certainly die. That you have to be everything to everyone or your useless existence will spontaneously combust and you’ll disappear into a meaningless black hole.
SUP is out October 22 via Wax Bodega.