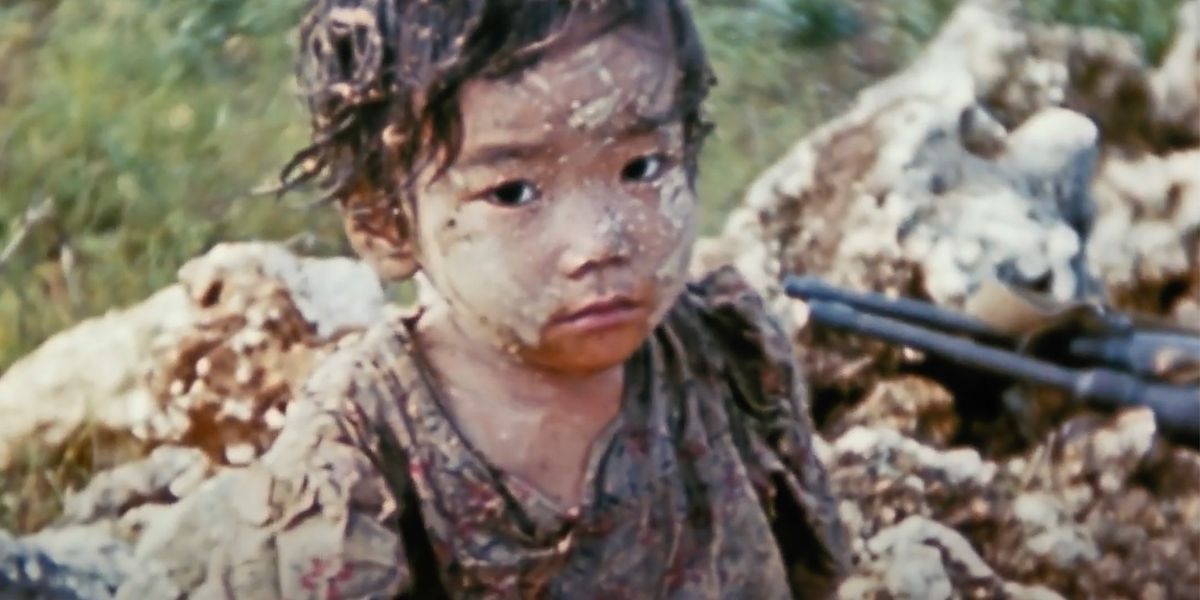 On more than one moment in Erik Nelson’s Apocalypse ’45 viewers will likely find themselves gaping in awe at the splendor of what you are seeing. The next moment their stomachs may heave. Somewhere in between they will hear the voices of men who were witnessing and acting out the absolute worst that humanity has to offer, and sometimes even after 75 years still don’t know what to make of it all. It’s just that kind of documentary.

Timed to coincide with the 75th anniversary of the end of fighting in World War II’s Pacific Theater, Apocalypse ’45 is a spectacle event film, in its way. There are widescale battle scenes that Hollywood would only ruin by trying to imitate. The mostly unseen National Archives footage, much of which was shot by embedded combat photographers, has been restored by Nelson’s team to yield a rich but raw panoply of color and drama. But at the same time, the documentary maintains a closeness that brings an often uncomfortably personal coloration to what we see.

Nelson is paying homage to a vanishing generation of soldiers and includes their yearning for a time when it seemed the US could still unify around a cause. Still, this is not a burnished Veterans Day nostalgia reel. “Golden Gate in ’48, bread line in ’49” is how one Marine remembers their attitudes about how long it would take for the war to end and what would become of them immediately afterward. “Greatest generation,” humphs another when asked about the label, “Goddamn propaganda.”

The snippets of Nelson’s interviews with two dozen American veterans play behind a series of montages that sketch out a fairly brief overview of the war in the Pacific. It primarily covers the last few months of combat, from Manila to Iwo Jima, Okinawa, and the fire- and atomic-bombing of Japan. One of Nelson’s more spectacular finds, haunting footage of wrecked ships shot by John Ford in the aftermath of the Pearl Harbor attack sets the stage for the butchery to come. (Ford’s 1943 documentary, December 7th, was mostly censored by the government for being bad for morale.)

There’s a disconnect running through much of what follows. Nelson pieces together images of the Americans’ island-hopping campaign, a close-fought slog in which soldiers died in waves for rocks in the ocean they had never heard of. Some shots carry a shivery grandeur: mountains of smoke billowing out the sides of battleships as they fire salvos, tracer bullets lacing a brilliant azure sky speckled with clouds of flak, cable cars rolling through Hiroshima’s post-atom bomb moonscape.

Elsewhere, it’s the odd details that stick out: a dog incongruously wagging his tail while perched on the barrel of a battleship’s cannon, Marines going into battle on sun-blasted beaches wearing a kind of white-blue sunscreen. But these glimpses of beauty or incongruity are always brought back to Earth by what we hear.

“I felt heartsick,” says one Marine about the grinding slaughter of the island fighting whose cost is almost impossible to appreciate now. Almost 7,000 Marines and 22,000 Japanese died at Iwo Jima alone, just so that the Americans could base bombers there to firebomb Japan. “They were not nice people,” says another about their enemy in what an on-screen title terms a “war without mercy.” “I didn’t mind” killing them,” he adds.

The men are a mixture of matter-of-fact, thoughtful, pained, and defiantly cold-blooded, sometimes wrapped up in the same reflection. “I strafed trains, water buffalo, anything that moved,” says a fighter pilot while gun-camera footage shows Japanese fishermen running for cover as bullets slam into the beach around them. The fighting itself is shown as less a contest of strategy and more a grinding annihilation in which Marines advance across shell-shattered islands with flamethrowers and grenades.

None of the interviewees seem to have any John Wayne notions of heroics, even the man who won a Medal of Honor for taking out seven Japanese positions on Iwo Jima. A Marine who lost his foot is described as “the happiest guy in the world” because it means he can go home. “You just had to be lucky,” says another about surviving.

The civilian toll is given a higher profile than this type of war anniversary documentary typically provides. Nelson includes one man talking about the Japanese women on Saipan who would leap into the ocean with their babies strapped to their backs rather than surrender to Americans. One short but crushing sequence shows nothing but Japanese children with horrific wounds being treated by American medics.

A soldier first notes the old cliché about war being hell, as the screen shows a thin child with hollow eyes who cannot stop shaking, before adding “I never visualized hell being that bad.” A documentary like Apocalypse ’45 makes that kind of discomfiting visualization resonate for a lifetime.