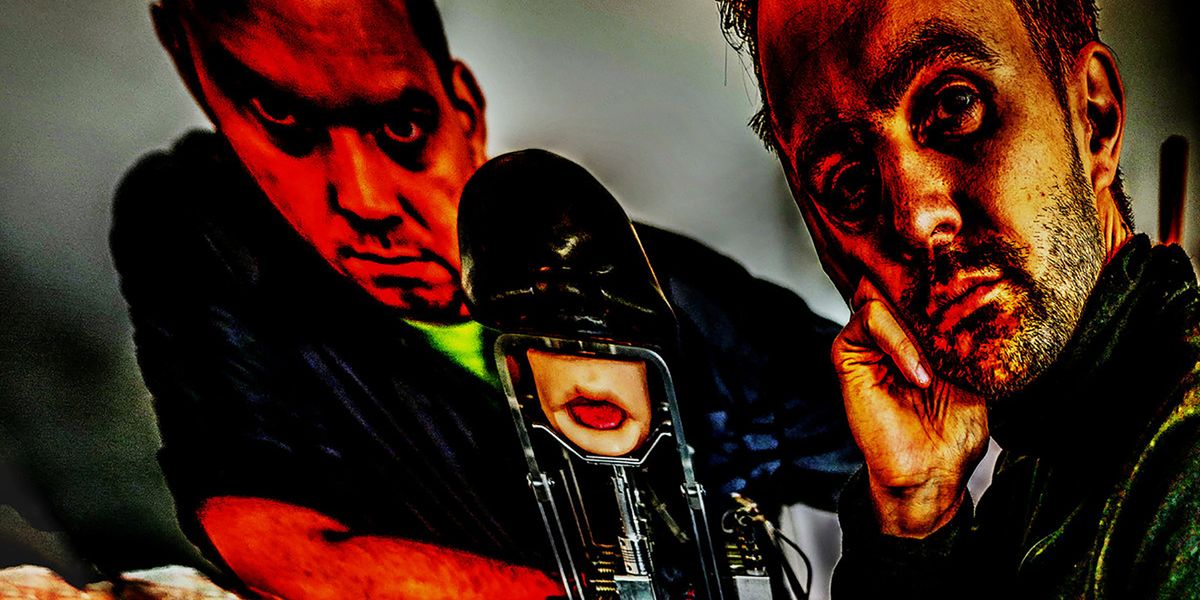 Amnesia Scanner is the Berlin-based Finnish duo of Ville Haimala, Martti Kalliala, and Oracle, the synthetic voice who is described as “the third, machinic ghost-member”. After a series of mysterious releases since 2014, the group broke out as one of the most compelling new artists of 2018 with their debut full-length Another Life, a wiry deconstruction of electronic music, memetics, and criticisms of consumerism. Thereafter, they joined the founder of PAN Bill Kouligas and the conceptual artist Harm van den Dorpel for their 2019 full-length Lexachast, an audiovisual experimentation of algorithmic sounds and images from DeviantArt and Flickr.

So immersed in the center of experimental electronic music and audiovisual art, it was exciting to think about where Amnesia Scanner would refocus their conceptual lens onto after the turn of the decade. Intriguingly, their latest 2020 full-length Tearless hones their typically obscure modes into their most precise concept yet. That is, the 10-track album aesthetically maps the failing Anthropocene. It offers limited, ambiguous answers through words, as expected, but it powerfully speaks about our divisive world through artistic and aural choices. Its globally connected featured artists bring together the voices of climatic hotspots, from Europe, South America, to the United States. And, its experimental mesh of deconstructed club, reggaeton, and metalcore mimics the popular chaos that bombards the dominant consciousness. Tearless is, as Amnesia Scanner told, “a breakup album with the planet”.

Tearless begins as a cli-fi novel might end, on the precipice of climatic defeat. The opener “AS Enter” emerges as a vast soundscape that shares a daunting perspective about the Anthropocene. Amid damning, reverberating synths, Oracle’s distant, reverb-ladened voice deems, “When it ends, it ends / When there is no plan / Turn the page, my friend.” That is a disillusioned but understandable starting point for the album. Amnesia Scanner first conceptualized this project as the realities of climate change grew incessantly nearer to them. It was a period in which they witnessed “their icy home country of Finland thaw,” and massive climate strikes take place in their current home base Berlin.

These conditions led Amnesia Scanner to feel that “there’s a looming sense of radical change”. Of course, no amount of intuition could have led anyone to imagine the many radical changes that actually emerged around the initially proposed release date of Tearless, 5 June—Amnesia Scanner decided to postpone the release of Tearless to 19 June as all proceeds from Bandcamp were donated to the NAACP Legal Defense Fund. Now, the world is mobilizing against the systemic killing of black people, against the elite oppressors, hired guns, and agitators. And, scientists, politicians, and industries continue to clash about how to navigate COVID-19, exacerbated by conspiracies and xenophobic sentiments. So, in such divisive times, overloaded by battling signal, it seems that Amnesia Sanner was fortuitous and justified to declare that “there is no plan”.

However, Tearless immediately rises from the somber opener to the declarative title track that features the Peruvian artist Lalita. Over synthetic guitar riffs and anthemic drums, Lalita powerfully commands vocal chants. She cries, “Este aire me va a calmar / Esta tierra te va a curar / Pero ya no lo siento cierto”, lamenting the loss of spiritual connection to the air and land. Such lamentations may allude to Peru’s melting glaciers or the increasing climatic struggles for generational Andean alpaca herders. But, Lalita’s impassioned delivery ensures that Tearless does not simply mourn such tragedies but also cathartically denounces them.

Thereafter, from South America to the northern States, the following track “AS Flat” features the metalcore band Code Orange. Tearless continues to foreground the voices of climatic hotspots with distorted throat shrieks that emerge from mechanical beats and menacing, metallic guitar riffs. This industrial pit is cold, malaised, distressed. It makes palpable the industries that systemically converge in poor and minority communities, creating systems of environmental racism in places like Code Orange’s hometown of Pittsburgh, Pennsylvania. It makes evident the rightful anger that must be expressed and heard from these communities.