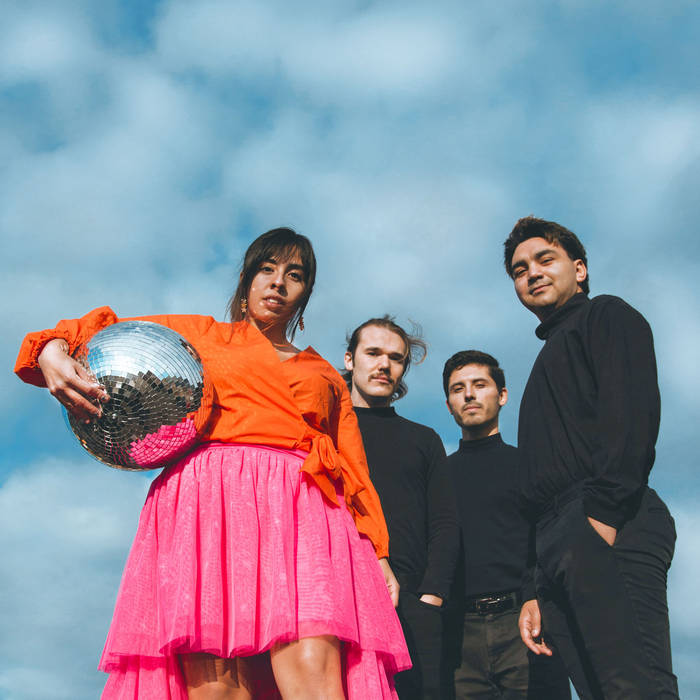 Album Review: Girl K – “Girl K Is For the People” Girl K refuse to stay static, jumping from one musical idea to another, and taking the listener on a restless and rollicking journey over the course of just six songs on Girl K Is For The People. While the main reference point here is synth-soaked, neon-blazing 80s music, the group doesn’t sound like a revivalist or nostalgia act, but rather a modern band rooted in this time that has just chosen to present their ideas through the sounds of 80s music. Part of the reason for this is the creativity and heart behind the songs. The point is not to simply create a soundscape, but to do something interesting with that soundscape, which is exactly what Girl K does on their new EP.

Opener “You” begins with a warm synth and Kathy Patino’s strong vocals that match the growth of the song from a soft 80s pop tune to fierce rocker with Kevin Sheppard’s guitar shifting between the background to the foreground, vying for the listener’s attention. “You” sets the tone for the dynamic nature of the EP, with the band cycling through a variety of distinct sounds, while still keeping the songs together and coherent. “You” sounds like a completely different song about one minute in, and that’s part of what makes this EP such an enjoyable listen.

“Best For You” throws a curveball with the Latin-inspired piano intro, ending with bassist Alex Pieczynski making his presence known with a fill to bring in the rest of the band. Lyrically, Patino takes the theme of looking on a past relationship in her own interesting way with lines like “I’ll leave a mess under the fridge / leave without a clue / I’ll come back in the morning / I’ll always come back for you.” It’s followed by “Girl K Is For The People”—the first single released,  almost doubling as a mission statement for the EP—begins with a guitar strumming eighth notes on single strings backed up by a humming synth before Patino’s frantic vocals enter. The verse is upbeat and fun with the rest of the band adding gang vocals to bounce off Patino, while the chorus pulls a 180 with a slowed-down delivery of “I wanna see it all as it was” wrapped in synths. The dramatic contrast between the verse and chorus could come off clumsy in the hands of a lesser band, but Girl K nails it, making “For the People” a standout track.

“Real Mad” favors the guitar over the synth, as Sheppard alternates between huge distorted sounds and a cleaner, arpeggiated delivery. The tune builds from a restrained feel until about two and half minutes in, feeling like it was impossible to hold the energy back anymore and everything just had to get loud. “Hah” bridges the gap from “Real Mad” to the rest of the EP, with the heavy distorted guitar working alongside the astral synth sounds to create the track’s vibes. Again, the group is able to pull off a chorus dropping everything out except the synth and vocals. Instead of derailing the song, it leads naturally into the next movement. That vocal bridge is followed by a synth breakdown that again allows the group to build and veer off into a new musical direction. With all that’s going on in these songs, there is still a feeling of open space between the instruments. Nothing is overladen here, giving the record the electric energy of a live performance.

EP closer “Departures” is an instant classic. With one shoulder-lean into the synth, Girl K accomplishes everything Jack Antonoff was going for on Take The Sadness Out Of Saturday Night, but couldn’t quite grasp. Reflecting the dynamic nature of the EP, the track morphs from the opening moody 80s vibes into a ripping indie rocker, before a soft vocal breakdown is followed by a Pixies-esque bridge, and then back to an indie rock track dripping with intensity and earnestness. It’s both a perfect closer for the EP, as well as a microcosm of the sounds and ideas explored over the rest of the tracks.