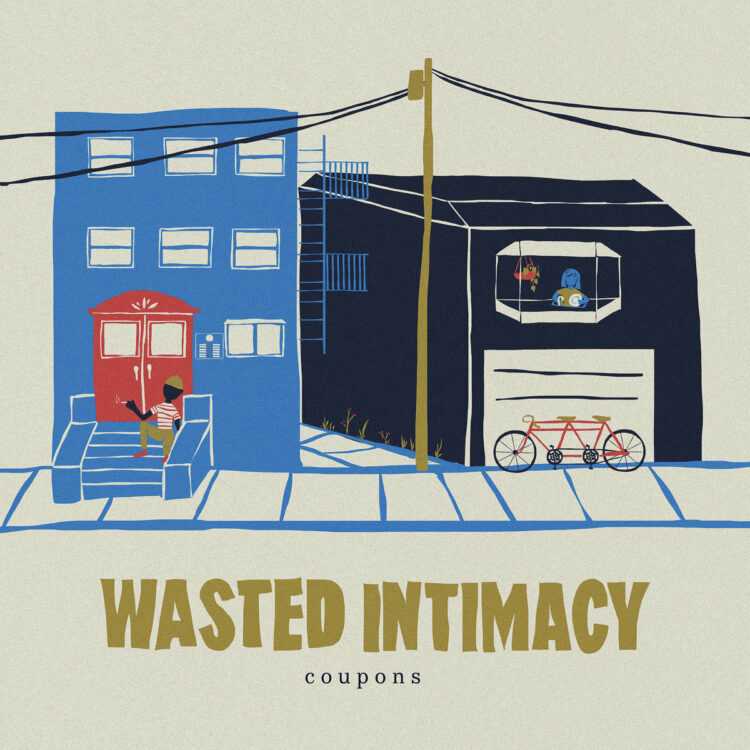 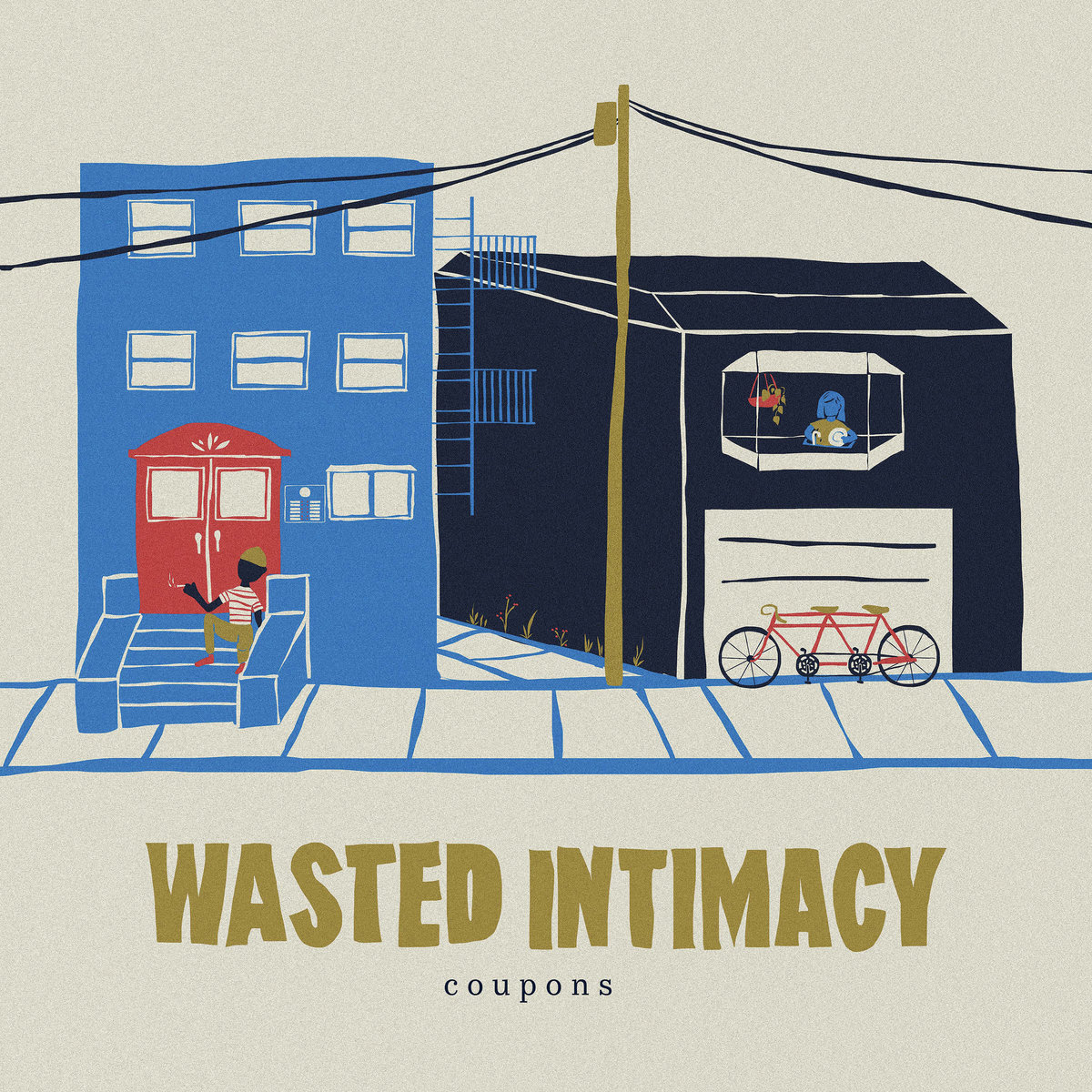 Coupons’ 2020 record Up & Up was a wild and fun collection of songs that found the band exploring multiple musical avenues in the way you might make a mixtape for someone with a range of styles to express whatever that particular mixtape is meant to express. Their new album Wasted Intimacy streamlines things a bit with a lot of those avenues explored on Up & Up appearing in moments or diversions in the midst of a more overarching feel of 70s influenced indie rock. Wasted Intimacy—which was produced by Scoops Dardaris, who’s really having a hell of a year—was recorded more as a live band playing through the songs, and there’s a palpable buzzing to these tunes that really elevates them and shows how good Coupons can sound. That live energy is particularly noticeable in Dylan DePice’s drumming, which sounds great on Up & Up, but has an extra spark on Wasted Intimacy, as he seems to fall back at the right points on the sunnier songs and push things just enough on the hard rockers, working as a strong anchor for the band and allowing the interplay of the melodic bass with the unleashed guitars and keys to fill the record’s space.

That buzzing energy can be felt immediately with “Mardi Gras” and “Waiting,” two high energy rockers that kick off the record. While “Waiting” makes use of a few of the musical tricks the band worked with over Up & Up, with some heavy guitar as well as a backbeat reminiscent of Up & UP’s “Moz Disco” at times, “Mardi Gras” is all about Collin Reynolds’ lyrics overtop of the tune’s cutting guitar lines. He picks up on the line from “90s Kids” off  Up & Up, pushing “I just want to feel the best I ever have / every single day” further to the brink with “it’s not enough to feel the best I ever felt every day / kamikaze drinkers on a getaway” and a chorus of “this is where I live / in between denial and regret” on “Mardi Gras.” That mixture of denial and regret is put perfectly as the tune ends on “tell me that it’s fine / no consequence to life / I had a gun but sold it for a wife / I wish to hell that God would sober up,” repeating the final line.

Coupons’ breezier acoustic side pops up first on “Milk” and “Four Wheel Drive,” two swaying tunes punctuated by some gorgeous keys and slide guitar lines. “Milk” finds Shannon Straney taking the lead on vocals with some great lines like “I will always be the first to admit that I don’t know / there’s a price at the door, it just goes how it goes / as a child, I thought that God was someone I could convince with a solid argument / but that’s just yelling at nothing” overtop of hand percussion that adds a shuffling feel to the track. “Four Wheel Drive” is a little twangier, building from a country feel to a huge chorus of “I just want to tell you / you’re my best friend” with Dan LaFave’s vocals backed by a shimmering organ. “Major Leagues” also shows the band’s sunnier side with some bright and enticing guitar lines at the start. Things are paced a little quicker here and the the heavier chorus of “don’t slip, dangerous dreams / if you need something unusual to help you sleep / waking up from a teenage dream / go to bed early for the major leagues” forms a nice back-and-forth with the bouncier verses full of clever lines like “what’s a name really mean? / F. Scott C.W. dream / Daisy Jamie Marie / late stage ivy league / consciously uncoupled from her English degree” over more open instrumentals.

“Break a Leg,” “I Can,” and “Bottomless” from a solid three-song run in the middle of Wasted Intimacy, showing off the band’s more aggressive attack. The showstopper chorus of “here’s to thinking things will work out / here’s to hoping we don’t shut down / maybe I’ll stop freakin’ out your friends / there’s no more guarantees to how this ends” in “Break A Leg” has a far more lively feel than the second half of Reynolds’ lyrics would suggest, while the verses explore that alienation further with lines like “take me to the basement / feelin’ so American / I want a sip of medicine / and a curbside panic attack / see it out of left field / buzzin’ like a UFO / I can barely fake my day / it’s mind control.” “I Can” alternates between a heavier hard rock chorus (followed by some fun Thin Lizzy-like dual guitar lines) and lighter acoustic verses with slick slide touches over lines like “you want a city girl / you got a country wife / I want a photo spread / above the loss of life” and “I am an empty house / I’m half-paid loans / I am a cancer scare / and never-ringing phones.” “Bottomless” takes a more eerie and minimalist approach in the verse with lines like “tear it up, knock it off / drag me down, fuckin’ stop / exhausted and confused / sure enough I’m used up” from Dan Maddalone in the verse and a huge chorus of “what a time to be barely alive / how is my weak side so strong?” with things ending on an absolutely killer guitar solo at the end.

Landing where it does on the record, “Cryptic” feels like that turning point in a live set that starts off more quiet and contemplative, but find the band playing off their fucking heads by the end of the tune, as the fingerpicked acoustic and falsetto vocals have given way to the heaviest, most brutal instrumental run on the record. While “Anyone Else” starts off a little more reserved, that intense and grandiose energy is still apparent from the opening arpeggiated piano, signaling the atmospheric levels the song soars to, especially on the vocal breaks from LaFave splitting the choruses like “it’s the way you strike my soul / when you make your way back home / it’s the earth under your fingernails / the way you ditch your clothes.” By the time the lyrics of the refrain morph from “I can’t be anyone else” to “I can’t be with anyone else,” the synths are floating above everything with an undeniably great melody. The song is cinematic and huge, full of a driving, forward-pushing momentum that again goes back to the live performance feel of the record, with DePice’s drumming shining through accompanied by some melodic touches from the bass in the song’s quieter instances.

Album closer “Japanese Whiskey” is a moment of triumph for the band, growing slowly from a twinkly starlight feel with the instrumentals slowly adding a grit that matches Reynolds’ increasingly dark lyrics like “do you smile back at the mirror? / Can you wash the blood out from your mouth? / Are you too hungover to call her? / Belly-up and inside out / Do your words have any meaning? / Are you living with truth and doubt? / I know you’ve got a positive message / But can you spell it out?” The song explodes in the final chorus with the repetition of “is it any wonder? Is it any mystery at all?” before closing out on a reverb-heavy fade out, winding the record to a close.

While Coupons’ back catalog is full of great music, Wasted Intimacy finds the band at their best yet, playing off each other perfectly. There are probably more guitar solos than before, but nothing feels cluttered here and it’s impressive that a band with four different songwriters can put together an album that feels so much like a singular vision. The band is so tight musically and there is so much worth reflecting on lyrically, that you really should not skip this record.