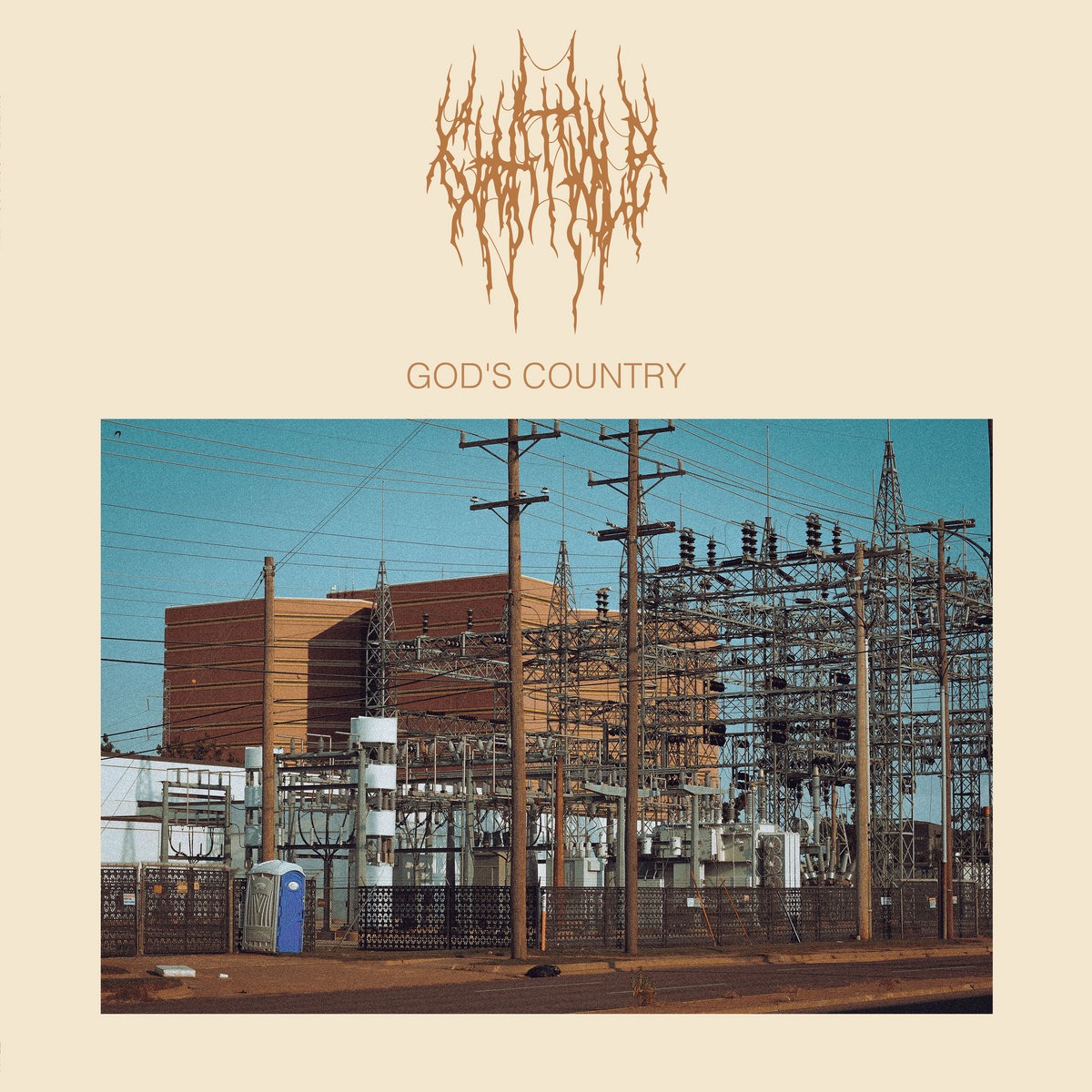 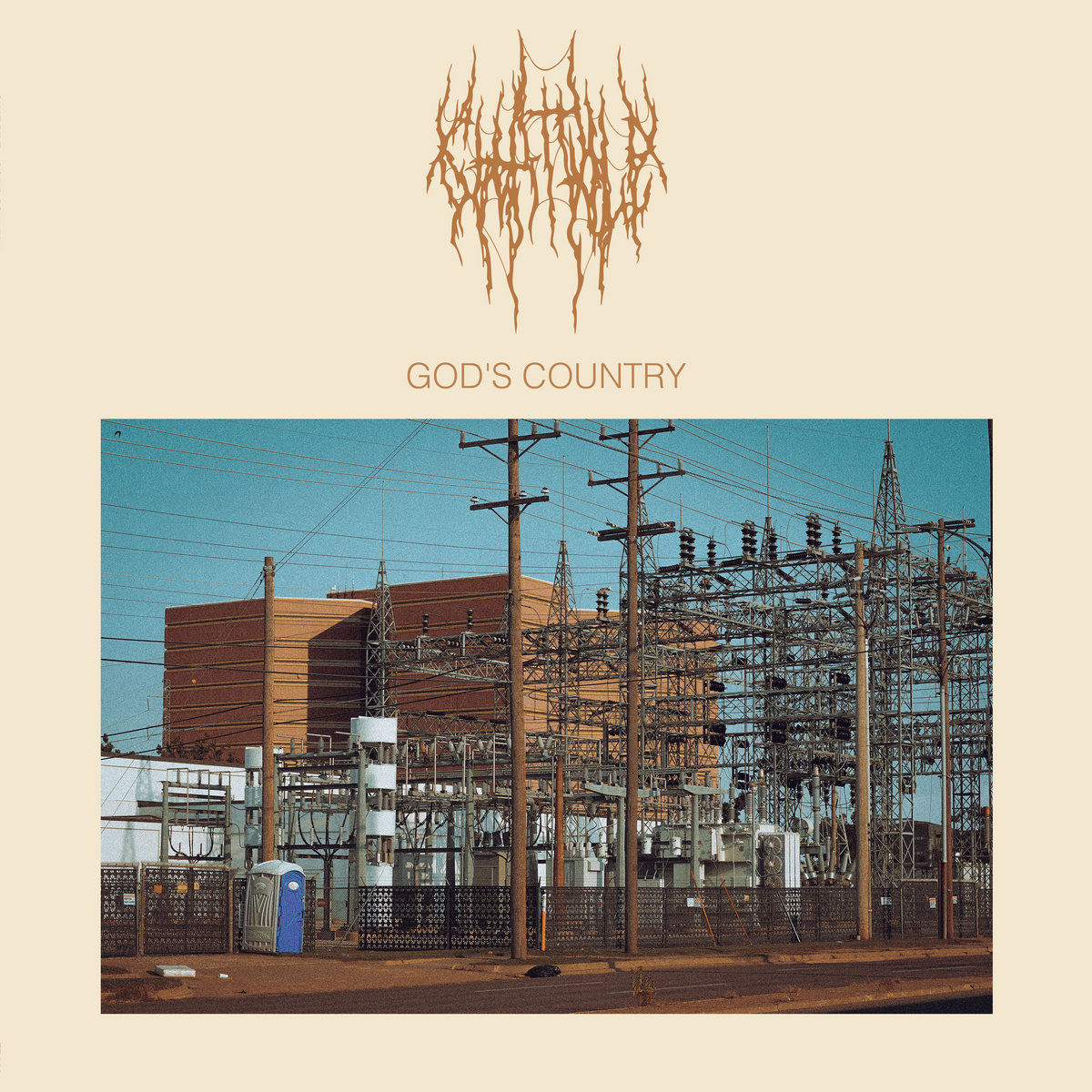 We are in the midst of what seems to be something of a meteoric rise for OKC’s premiere “death grunge” quartet Chat Pile, to the point that if you have been following the lead-up to God’s Country’s release, you have likely learned the contextual definition of “chat” a dozen times over by now. To keep it simple, it is a mining term for toxic waste that has been dredged up from the earth and left to pollute the surface. It is an appropriate moniker for a band whose primary objective is to mine the depths of ugliness buried within people and the infrastructures that they cobble together mindlessly and without care as if led by a siren’s song. Skin has been a recurring motif for Chat Pile, the flaying of it and the wearing of others’ skin. Sickly cosmetic suggestions that more truly represent calls for societal honesty and personal empathy. On the album art for God’s Country, you will notice the skeleton of a building, stripped of any aesthetic that could allow it to pose as inviting, laid bare for the collection of cold metal bones it is. With Chat Pile’s debut LP, the flaying of America, God’s country, is at hand.

Guitarist Luther Manhole, bassist Stin, and drummer Captain Ron by and large stick to building upon what worked for them on their twin 2019 EPs This Dungeon Earth and Remove Your Skin Please in forging God’s Country’s sonic identity. Slowly wailing guitar riffs are characterized by their searing, flesh-melting tone. Muddy bass so thick it will suffocate those who don’t watch their step. Crushing drums that serve as cranium cracking king hits. Fans of AmRep’s output from decades past should feel right at home marinating in the sludge bath Chat Pile has drawn for them, while those with more delicate sensibilities may find themselves in need of a good scrub down after their forty-minute sewage soak. God’s Country is filthy and nausea-inducing by design, right down to the mixing and production, handled by the band themselves. The grooves churn, and stomachs turn. Everything is leveled to create discomfort, and all is as it should be for the ill minds that find such things captivating. Those in fear of Chat Pile cleaning things up need not worry: their sound has only grown denser and viler.

Raygun Busch’s role in Chat Pile is less that of a vocalist and more that of an elite thespian. You could compare his inebriated ramshackle phrasing to that of David Yow, but it would be underselling how completely he transforms into the confused and sometimes violently unstable characters of God’s Country. If you are unfamiliar with his work before Chat Pile over the past fifteen-plus years, you would be forgiven for any apprehension you might have about encountering anyone who delivers performances such as “Dallas Beltway” from Remove Your Skin Please or “Pamela” here. Performances are so convincingly neurotic that you would swear he was an actual killer deep in method acting so he could make your skin crawl just the way he wants. With each mumbled threat and guttural scream, Busch elicits a fear that would make any slasher villain from the past thirty years of cinema blush with envy (look up Randy Rulz if you require reassurance that he won’t gut you like a fish). However, the terror instilled is only occasionally the result of some savagery enacted by a single person. More often than not, the topics on God’s Country are those of systemic horrors regarding the industrialization and commodification of nearly everything, whether natural or man-made.

“Slaughterhouse,” God’s Country’s opener, can be read literally as that of an anguished rant of a man swimming in the blood and viscera of an abattoir, drowning in traumatic recollections of the death screams (“There’s more screaming than you’d think”). On a broader plane above, it serves to analogize the meat industry to that of America as a whole. Busch is not precious with his language, nor does he seem concerned with outright wit. The verbal hammer he drops is heavy and blunt, but this does not mean his swings are lacking in purpose. Conversely, it is because of this that the messaging strikes the way it does. “Why” is a temper tantrum: a supremely justifiable one that makes a better argument against manufactured housing scarcity than any long-form essay could. When we have places where the homeless could live and we don’t allow them to live there, the issue doesn’t require deep analysis. We have the solution; the only problem is a willful lack of execution (“Why do people have to live outside? / We have the resources / We have the means”).

Elsewhere, Chat Pile crafts a harrowing, A Scanner Darkly-esque depiction of drug culture (“His skin is all fucked up but he cooked a nice batch / Everywhere in the walls new roach babies hatch”) on the propulsive “Wicked Puppet Dance.” While it is difficult to parse out the particular point of intersection, lyrics also seem to indicate the manipulation of organized religion (“Falling from the cross, I am held up by strings / Can’t stop dancing / A wicked puppet”). By its end, it’s a tale of murder and arson, presumably as a result of a deal gone bad. It could also be interpreted as a violent homophobic reaction, depending on how literal “Tried to fuck me” is. If anything, Chat Pile’s music can at times seem like a Rorschach test, carried less by its details and more by its emotions, with “Wicked Puppet Dance” and “grimace_smoking_weed.jpeg” exemplifying this tendency the most. “Anywhere”‘s portrayal of an instance of senseless gun violence is redoubtable to an extent of transportation: the brains are on your shoes and all you want to do is break down and cry because you know this is happening. You know you and your loved ones are not safe. You know it could be prevented or mitigated but nothing ever changes. Chat Pile are not the only band to ever visit these subjects, but they are one of the few to capture such dread in a way that feels palpably authentic.

For those initiated into the Chat Pile fanbase through a “Dallas Beltway,” there are still more insular crime-horror narratives to sink into on God’s Country. “Pamela” usurps any Friday the 13th film on the grounds of uneasy psychological intimacy with only five minutes and no images to aid it, relying on Busch’s cries of “Resurrect my son!” so full-forced it sounds as if he’s hoping to vomit his intestines out as an offering. It fittingly sounds closest to something from a slasher flick. The instrumental through the verses is a touch more subtle and eerie than much of God’s Country: nowhere approaching soft, but less interested in carving you up than letting you know it’s about to happen. “The Mask,” meanwhile, tackles the old true crime of the 1978 Oklahoma City Sirloin Stockade massacre. It ironically feels just a touch more distant than “Pamela,” though still morbidly affecting in its own right, perhaps out of respect.

Closer “grimace_smoking_weed.jpeg,” the demo for which we first heard more than a year ago, has by far the silliest track name on the album, the longest runtime on the album at nearly ten minutes, and is certainly one of the more obtuse pieces featured on God’s Country. It’s a stew of self-loathing, self-harm, self-medication, and bitter nostalgia so cooked the ingredients have become nigh indiscernible. Did the McDonald’s taste bud mascot touch this guy? Does he want to be the McDonald’s taste bud mascot? Is this about cyclical trauma? The sentiments are tangible, but the form is ethereal: a bizarre balance.

God’s Country evokes a similar response to that of watching a Shinya Tsukamoto film: built on unfussy abstractions that fuel concrete impressions of brutal truths. From the soulless mechanical mutation of our society wrought by late-stage capitalism to the pointless violence our stubbornness breeds, Chat Pile peels off all of the flesh concealing our hideous innards. They force us to gaze upon them in disgust. God’s Country is not an easy listen, but it is an incredible one: if you’ve got the fortitude to confront yourself and the post-hope world.

God’s Country is out now via The Flenser.