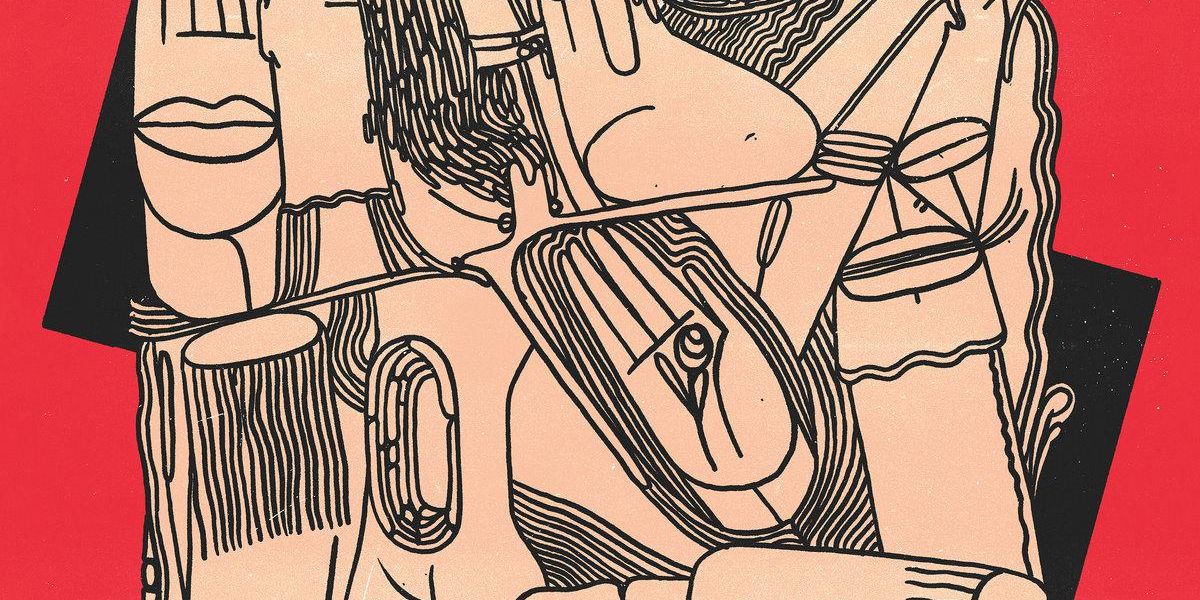 You’d be forgiven if you never foresaw Detlef Weinrich and Emmanuelle Parrenin teaming up. The former is a Dusseldorf DJ known for his machine-like krautrock grooves; the latter is a French harpist and hurdy-gurdyist who made a name among cratediggers with her 1977 folk album, Maison Rose. You’d also be forgiven if you thought the two artists wouldn’t gel together, but you’d be wrong. More than 40 years since the daydreamy, electroacoustic beauty of Maison Rose, the legendary Emmanuelle Parrenin—now in her seventh decade—has joined forces with a modern krautrock guru to create the most deliciously weird, hypnotically groovy album of the new year.

Alright, there is some precedent: one track from Maison Rose, “Topaze”, had a distinct krautrock flavor, with its lurching, downtempo groove recalling Neu! and Faust at their best. Otherwise, the collaboration is so strange and unforeseen that it doesn’t follow any rhyme or reason. Neither does the resulting LP. Jours de Grave (which translates to Strike Days in English) is so left of leftfield, so beyond all genre classification, it doesn’t seem like it should work. On paper, it looks like some pretentious fourth-world experiment, especially with all the tribal chants and hand drums.

But the miracle of Jours de Grave is that it not only works but works wonders. It’s damn near perfect. It feels too organic and alive to be called “avant-garde”, even though it is. Like its label’s namesake, Versatile Records, Jours de Grave is a baggy, versatile melting pot of downtempo, krautrock, and psychedelic folk. The nine tracks here are not really tracks—they are freak-jams, full of wordless howls, dubbed-out bass, and stomping, motorik grooves. There are several guests, each of whose presence makes about as little sense as the LP itself, but each shines in their own way.

The first guest is saxophonist Quentin Rollet, who provides several solos. On tracks like “Gelbe Schlange”, Rollet’s spindly, nimble sax provides the perfect contrast to Weinrich’s crushing drums. His sax sounds shy and reserved, like it’s afraid of waking a sleeping giant. The other guest of prominence is Ghedalia Tazartes, a Parisian cult artist known for his unintelligible vocal style. On “While Layers Over Black Papers”, Tazartes sings in a wolfish, wordless croon over shakers, bongos, and throbbing bass. Tazartes does anything but sing—he barks, howls, mumbles, and yawns. His vocals lend a disembodied air to the music, quivering and trembling like a beck-and-call to some sonic abyss.

Guests aside, however, Parrenin and Weinrich shine in their own right. Take the opener, “Le Couple Coupable”. Parrenin sings in a creepy, chanting style over Weinrich’s low-end motorik groove. On the tribal romp of “Caltec’s Dance”, the pair delve into genuine freak-folk territory, with yelping vocals, clapping percussion, and twangy guitar flecks. Overriding it all is Parrenin’s incomparably lavish hurdy-gurdy, adding a sinister, medieval flair to the song.

Indeed, there’s a very sinister element running throughout most of the tracks here—the duo often sounds like they’re in the middle of some magical incantation, trying to placate some unknown deity. In many ways, Jours de Grave recalls the spirit of another freak-folk epic: Comus’ 1971 masterpiece First Utterance. Like First Utterance, this LP has an occultic, mythical feel, conjuring images of some remote pagan wilderness untouched by civilization. The music is worshipful, but it isn’t quite clear to whom (or what) the worship is directed. That is especially evident on the last track, “L’Incantation du Héros au Yeux Bandés”. Here, Tazartes sings in an ululating style reminiscent of Islamic music. The drums crash around him like a battering ram as his pleas soar and swoop and then fade, at the end, to little more than gentle throat-singing. It’s the hardest-hitting track on the record—and maybe even the best.