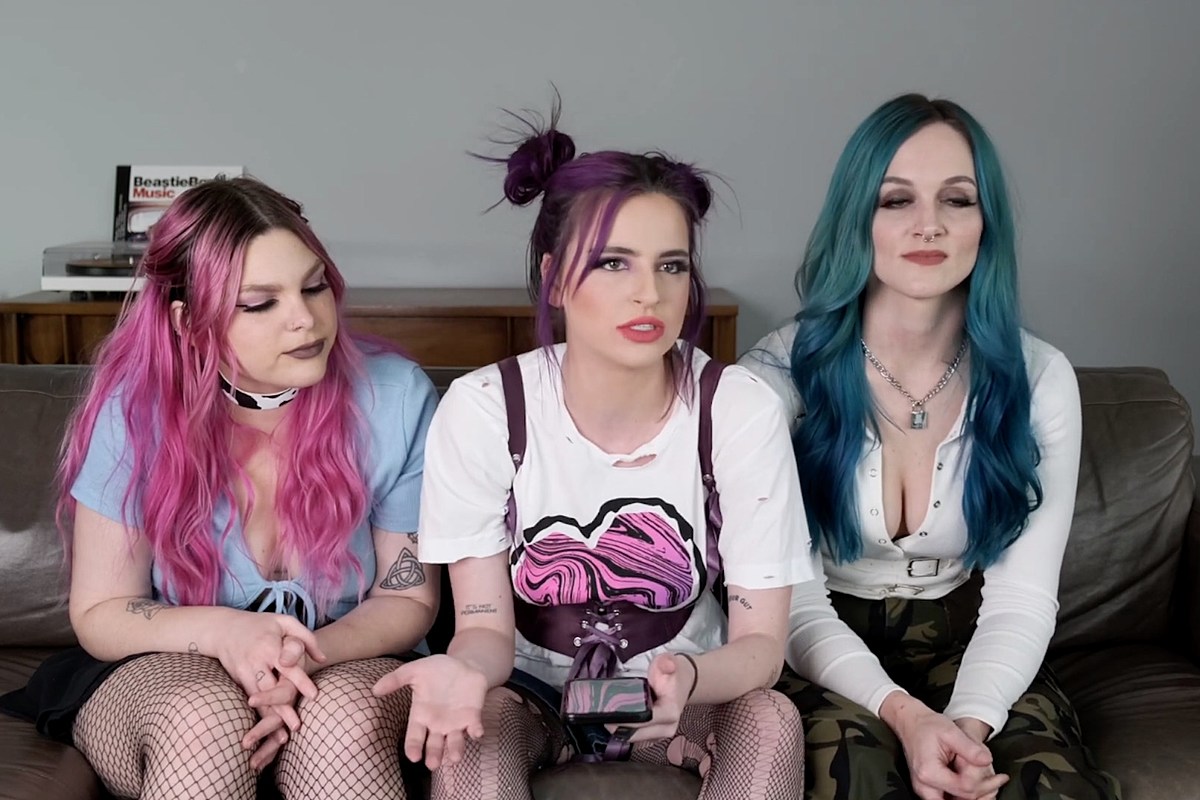 Tramp Stamps started getting a lot of attention on TikTok last week, but if you’ve recently heard their name anywhere on the internet chances are it wasn’t in positive light. So who are this band, and why does everyone already hate them?

Tramp Stamps are a pop-punk trio who appear to have started in 2020. They just dropped their very auto-tuned new single “I’d Rather Die” last week and since have received a lot of backlash — initially on TikTok and later on Reddit and Twitter.

Why? We’ll break it down, but there are two main reasons. First, the band have gotten flack for some of their lyrics and also for their perceived pandering to Gen Z as a queer, feminist punk band — an identity many have called out as not being authentic.

The second, and this appears to have stemmed from research done following the lyrics backlash, accuses them of being industry plants. Some internet sleuths have connected them to producer Lukasz Gottwald, known professionally as Tyson Trax or Dr. Luke.

Gottwald is a controversial figure in the music industry — he was embroiled in a long legal battle against pop singer Kesha where she accused him of rape and emotional abuse and he countersued for defamation and breach of contract.

It was enough for Rolling Stone, and other publications, to investigate the connection — it appears multiple outlets have reached out to the band and/or Prescription Songs, a music publishing house owned by the producer, and received no comment.

So let’s get into it. Who are Tramp Stamps and why are they causing such a stir?

Why Are People Talking About Tramp Stamps?

This story begins on TikTok where a new band began to gain a following doing covers of pop-punk classics by everyone from Avril Lavigne and Blink-182 to Good Charlotte and Paramore.

The group features three women with brightly colored hair and an obviously rock aesthetic. They also attempt to align the band with feminism as a quote from guitarist Caroline Baker in the band’s bio claims the band’s music is “the kind of stuff women talk about all the time with their friends, but no one’s ever put it to this kind of music before.”

Apparently they aren’t familiar with the riot grrl movement.

Last week a video promoting their single, “I’d Rather Die” began popping up for TikTok users with an interest in alternative music, but rather than gain them fans, this may have been their downfall.

Some TikTok users found the song’s lyrics such as “I’d rather die than hook up with another straight white guy” to be problematic and began diving deeper into who the band were.

That’s when many users began to notice the band’s website, social media and marketing seemed too polished for an upstart “punk” band, uncovered the three members’ past work in music and started labeling them industry plants.

One positive note is this encouraged music fans to lift up other alternative bands that you should follow instead of Tramp Stamps — including this clip by TikTok influencer and Loudwire contributor Yasmine Summan, which you can see below.

It wasn’t long before Reddit sleuths discovered that both Baker and singer Marisa Maino signed publishing deals as solo artists with Prescription Songs, which as stated earlier is owned by Gottwald, aka Dr. Luke. Despite Gottwald’s legal woes, he’s recently produced Doja Cat and Kim Petras, who both had big viral success on TikTok.

It’s unclear if Tramp Stamps have a deal with Prescription Songs.

Who Are Tramp Stamps?

Made up of singer Marisa Maino, guitarist Caroline Baker, and drummer Paige Blue, according the the band’s bio they are based in Nashville.

When asked how they came together during a YouTube Q&A, they explained that they’re all songwriters and that’s how they met. They formed the band in 2020 and the first song they wrote together was “I’d Rather Die,” which is their controversial first single.

In the same video, which you can view below, they cite Avril Lavigne, Katy Perry and Hayley Williams as influences and then add Cardi B, Megan Thee Stallion and Haim.

TRAMP STAMPS TELL ALL: WE ANSWER YOUR QUESTIONS

Both Maino and Baker have released pop music on their own recently and Blue appears to have done more work behind the scenes as a producer and songwriter. So it’s clear that prior to starting their band, all three women have had prior involvement in the music industry.

An industry plant is someone who has the backing of a label while presenting themselves as self-made. Are Tramp Stamps that?

They’ve all been in the industry as solo-artists and songwriters with drummer Blue focusing more on producing, so it’s not surprising they have some connections behind the scenes, though it’s unclear what the extent is. It’s also still not apparent whether the band are attached to a label.

In addition to the member’s connection to Prescription Songs, their YouTube shows their song’s being licensed through Kobalt Music Group. Gottwald is part owner of Kobalt.

Blue also admitted during the Q&A mentioned above that the band has a marketing team behind them and their social media. When asked “How did you guys grow your audience?” after the other two members sarcastically responded with “being hot,” “tit pics” and “talent” grew their audience, Blue responded, “Tiktok was helpful. But also we do have digital marketing partners that help us stay consistent. That’s important to growing an audience. Social media consistency. And titties.”

So, in addition to their own experience in the industry, it does appear they are getting some help behind the scenes, but they also don’t seem to be trying too hard to hide it.

Here’s the thing: Solo artists coming together to form a group isn’t a crime. Also an entertainer pivoting to try something new isn’t always a cash grab. An artists can find success if what they are doing feels genuine. However, the fact that the band is less than a year old and already being accused of using queer identity and feminism to pander to Gen Z is not a great sign for them.

The major failure here is that someone should have been able to predict that rock fans wouldn’t respond kindly to something that didn’t feel authentic, which seems like a pretty good indicator that Tramp Stamp don’t really understand the genre they are trying to target to break into.