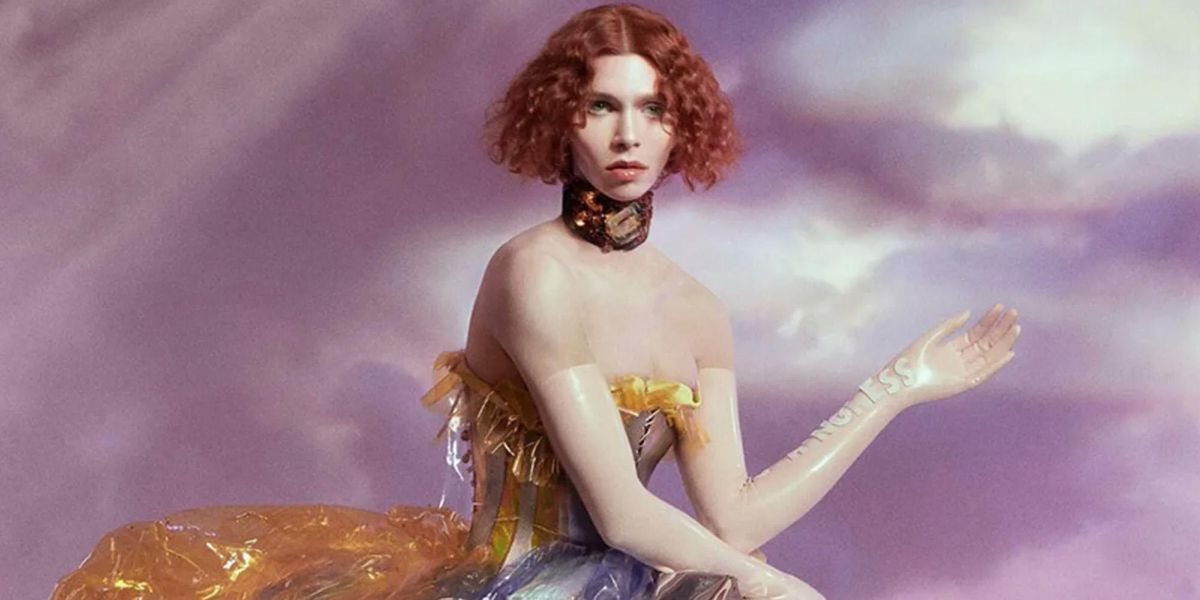 When “Bipp” by SOPHIE first appeared on the scene around 2013, it was controversial for some pretty specious reasons. Certain segments of the dance community, already fed-up with the contortions and genre-bastardizations coming out of the ill-defined nu-grime scene associated with Numbers, Night Slugs, LuckyMe, and the like, rejected “Bipp” as a pure novelty. Its lack of traditional percussion was grounds for dismissal from the dancefloor. A hype industrial complex was inflating its somewhat shallow verse and simple frame, the haters roared.

Yet, the song was so enigmatic that even if one didn’t think much of it, you had to contend with it. What exactly was this thing anyway? And why was it so hard to stop listening to it? “You’ve got to be crazy / Thinking you can resist this,” the song confidently contested. Perhaps much of the resistance the track drew came from the shock of the new. It wasn’t that any given element of the song that was revolutionary, but the whole formed a monolith that seemed to drop like a tablet in the middle of the desert. Yet unlike the black slab in 2001: A Space Odyssey, SOPHIE’s intentions and her promise were right there in the chorus. She could “make you feel better”, but only “If you let me”.

The other (even more slight in retrospect) controversy surrounding SOPHIE’s next few years was a concern troll over so-called “male” artists who had taken on women’s names as their monikers. The intent of this Tumblr-lite critique was well-meaning enough. Cis-male electronic artists had long monopolized attention in the dominant strains of underground club music. Further, mainstream DJ culture itself was becoming not only a multimillion-dollar industry but a white alpha hetero fratboy panacea that catered exclusively to their hedonic demands.

A gnarlier, more aggressive bass music variant of the mostly black and brown British dubstep scene of the mid to late 2000s pejoratively labeled Brostep outshined and outsold its signifier in astronomical quantities, replacing sensual postmillennial dread with violent squelches. Producers with one foot in the pop music realm and the other on the vanguard like Diplo were becoming renowned as much for their “bad boy” behavior as their music. As EDM ventured into the pop charts, clubbing even became a critical element of shows like the MTV smash hit Jersey Shore.

Patriarchy and the boys club mentality were ripe for targeting in electronic dance music and aiming at the practice of “appropriating” femininity that certainly had the air of accountability. But at best, it seemed more determined to police the symbolic and thematic terrain of artistic expression than to have any material impact on this culture. The collateral damage had anyone cared to take the conversation seriously, would have been an assault on the heterotopic safe space within electronic music to explore the fluidity of gender, to rebel against the determinism of birth assignment or social gender roles, and to gently poke cisnormative boundaries without fear of reprisal.

It would be three years before SOPHIE officially and triumphantly came out as a trans woman in the music video for “It’s Okay to Cry“, a liberatory ecstatic howl that changed lives and reset her image from that of a shadowy underground figure to an icon. The performative nature of synthesis and the immateriality of virtual presence would become a major theme in SOPHIE’s work throughout her short but fruitful career. Hers was music where dysmorphia, still common parlance at the beginning of the decade for gender-nonconforming folk, became not a disorder or a hindrance but an advantage in music’s ultimate goal of achieving trans-humanism.

Electronic music has long been a place where ego and even identity could be pushed out of the foreground to accentuate the collective music-going experience. This first seemed to be at the core of SOPHIE’s earliest singles, collected on the Product compilation. These were pieces where personality had not been stripped away but remained forever in flux, capable of adapting to its audience’s heat signature. The elasticity of the bass tones of “Bipp”, the rubbery drips of “Lemonade“, or the more hardcore liquid metal ping pong of “MSMSMSM” all skirted the line between the club and the pop radio dial. They seemed just as comfortable in either environment or on a different alien planet altogether.

Unlike the early to mid-2010s tendencies within club music towards maximalism or cinematic bombast, these tunes were composed, generally from scratch, with a concision that allowed them to go down smooth only to rupture like pop rocks into new sensations as they worked their way through your system. Even odder for the usually stern dancefloor genre was the music’s joie de vivre, its unique sense of humor and playfulness. Unlike other recent jocular fads like electroclash, which dished into camp nostalgia for its licks and kicks, SOPHIE’s sound was conceptualized within the parameters of a whole new world of post-internet living. It probed into the abstract hyperlinked relationships between the crass and cultured, the commercial and avant-garde, the quotidian and absurd. From here, she pulled out mutant hybrids that did not wail like Cronenbergian nightmares (such as they do in her close peer Arca’s work) but were ripe with agency, zest, and self-awareness.

It was this that earned SOPHIE space as a kind of fairy godmother figure for the burgeoning PC Music label and as a pioneer of the music that would retroactively be dubbed hyperpop (a combination of avant-garde electronics and its cheesiest fringes: happy hardcore, Eurodance, J-Pop, et al.). It turned out that transforming SOPHIE’s niche sounds into a kind of future pop involved only a few minor tweaks, and she launched a prototype along with PC Music founder A.G. Cook in QT. Although QT only ever put out one single, the project created a massive stir.

“Hey QT” was not only an ebullient, infectious call-and-response pop song directly from the heart of the zeitgeist, but it was also an advertisement for an energy drink called DrinkQT, which was initially fictitious but soon manufactured and distributed at QT performances. At those shows, actress Hayden Francess Dunham lip-synched the song as Quinn Thomas, aka QT, a living mascot for DrinkQT. The project’s presence in the popular consciousness and its vanguard music video lead to a long tail of YouTube-based musical projects (Poppy, Ayesha Erotica, Naomi Elizabeth) that seemed to exist mainly as proof of concept for a larger idea or theory.

This kind of high-concept performance art became part and parcel of the PC Music set, whose theatrics, antics, and sonics blended critiques of the total domination of late capitalism over the lives of its inhabitants with a seeming embrace of it. PC Music and their close proxy SOPHIE were creating a soundtrack in the mid-2010s for a new mental and political environment by diving further into the total, strangulating control grip of hyper-consumption, commodified sociality, and casual, almost banal, exploitation, to identify potential pathways to escape from it. It was a satire of naked marketing artifice.

However, they presented their aspirational future-commercial cuts in such plasticine, utopian light that they became uncanny simulacrums of the original, incorporating actual product placement alongside imaginary ones, disaffection alongside genuine passion, and tawdry pop cliches alongside innovative hyper pop alchemy. It frustrated many because it wasn’t clear who the manipulator was or if it was all some elaborate ruse. Still, the act of urging participants to question intention perhaps forced many to see how all-encompassing the corporate colonization of music and broader social experiences had become.

As such, SOPHIE did not a priori reject assimilation into the machinations of late capitalism. When McDonald’s approached her to use her song “Lemonade” in an ad promoting said drink, she jumped at the opportunity to bring the track to a new audience. Not least of the appeal had to be the song’s transgressive sexual allusions to piss-drinking seeping into the corporate chain’s mass marketing schema, a motif so obvious that sketch comedy writers basically ripped it off for an Inside Amy Schumer bit. But SOPHIE also understood that refusing a deal with the devil wouldn’t cede any power on behalf of the devil. It would just reward the ego and deny an opportunity to embed a moment of cognitive dissonance into the frontline.

“An experimental idea doesn’t have to be separated from a mainstream context,” she told Sasha Geffen in 2017. “The really exciting thing is where those two things are together. That’s where you can get real change.” Not everyone took this commercial turn nor the ironic pop utopianism lightly. PC Music faced hostility from parts of the listening public still hung up on fussy ideas of the counterculture as itself some kind of active resistance, rather than just another device in the branding toolkit. But PC Music and SOPHIE’s ideas, supported by theory-rich projects such as the concurrent DiS Magazine and yet just as inspired by the lowbrow awkward humor of Tim and Eric, eventually won the day as their sounds and ideas crept into the periphery of mainstream music.

Through her productions, SOPHIE’s startling dynamics touched a variety of above-ground names like Madonna, Nicki Minaj, Lil Yachty, Vince Staples, Camila Cabello, Cupcakke, Tove Lo, and Charli XCX. She did this through forging connections to these artists and bringing them up to speed, rather than compromising her integrity. She delighted in incorporating her avant-garde sound ideas into the backdrop of daily life, contributing exclusives to video games like Cyberpunk 2077 or The Sims 4 expansion pack and adorning the massive screens behind Louis Vuitton’s fashion week runway. When she finally emerged with her own and, sadly, only full-length LP, 2018’s Oil of Every Pearl’s Un-Insides, it was towering, tactile, intense, visionary, wild, and startlingly accessible, spanning ballads (“It’s Okay to Cry”) to deep ambient interludes (“Pretending”) to throbbing bangers as heavy as any death metal track (“Faceshopping”, “Whole New World/Pretend World”).