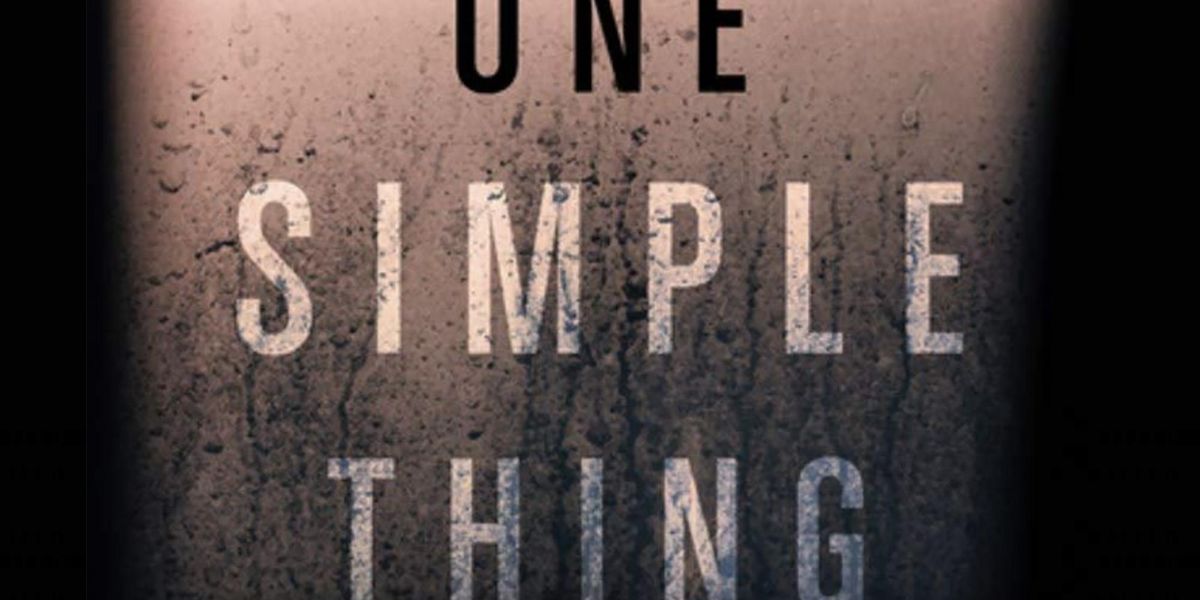 In his new novel, One Simple Thing, Warren Read follows Anne Lamott’s precept in Bird by Bird, the renowned guide to writing (and life): a writer need only write as much as can be seen through a one-inch picture frame. Lamott endorses this as a procedural device, easing a writer into beginning the task without being overwhelmed by the enormity of it all, but Read applies this tenet substantively, in the form of heightened attention to ‘one-inch’ detail throughout his novel.

On the first page of his story, 12-year-old Rodney sits at the kitchen table between his two warring parents, his “finger rubbing the chipped edge of his plate as he watched the whole thing unfold.” This tiny touch of detail, two surfaces in friction, grounds the entire scene.

Toward the end of the novel, a woman, seeing that a horrific act is about to take place, drops the carton of items she is lugging out of her crude mountain cabin; what does Read choose to show us in that moment? A vase, “blue as a peacock, the white of the sunlight catching its rim”, as it tumbles to the ground. Read puts us right there, in the middle of things.

Along with close attention to detail, Read serves up surprising metaphors, illuminating flashbacks, dialogue that is itself a form of action pushing the narrative forward, and adept description. For example, when Rodney’s mother takes up with Otis Dell, a fry-cook at the local diner and a guy who is up to no good, Otis fairly oozes off the page. As he enters the story, he “punched open” the diner’s kitchen doors to approach Rodney and his mother’s table, “[a] man who was mostly arms and sideburns … those sideburns of his that dripped like black ink from his ears to his jawline.”

Then Otis “waded deeper into their lives”, moving in after periodically making himself comfortable in their sad kitchen and his mother’s bedroom, so that when Rodney opens the refrigerator he stares at the milk bottle that Otis had been sloppily drinking from the night before. “There was Otis Dell in that milk for sure,” Read tells us, “where his mouth had wrapped itself around the rim.” Highlighting a detail, like a painter’s brushstroke.

Another element of Read’s craft that merits highlighting is his deliberate pacing. One Simple Thing is not at all a slow read, but has a narrative that unfolds slowly. Read takes his time in the set-up, giving us a deep sense of who these characters are and how they are embedded in their rural lives.

The author applies the classic template for dramatic structure: initial exposition followed by a long stretch of rising action that the reader rides toward the climax, then falling action, and a final resolution. However, what gives Read’s tale a living pulse, continuously pushing the reader forward, is his application of this template not just to the overall narrative but also to each scene individually.

Other hard-scrabble characters appear: an aging sheriff caring for an older brother whose dementia is gaining on him; a hitchhiker named Nadine who is picked up by Lester Fanning; a miscreant who easily puts Otis to shame (and who Nadine decides to live with) — characters who ineluctably converge toward Lester’s cabin and its very deep well.

Read’s plot grows organically out of the nature of his characters. Otis conscripts Rodney into a minor, middle-of-the-night caper that Otis warns Rodney makes him an accessory, followed by a long grim road trip that begins with Otis pulling Rodney out of school for a milkshake before coercing him into what becomes a violent narrative arc, with Rodney both a captive and a collaborator.

At its center, this is the tale of an innocent child without agency, thrust into the maelstrom of family collapse and nefarious strangers, making Rodney a confused co-conspirator in their criminal schemes. Along the way, there are set-pieces that are little gems: a home-cooked dinner gone haywire with Otis, Rodney, his nervous mother and her boss; then a scene culminating in Nadine’s spilling her deepest secrets to a woman who, she knows, does not speak English; and, finally, the road trip in which Otis careens toward big trouble for Rodney.

Here we find escape as a recurring theme, Nadine freeing a rabbit from Lester’s terrible trap before he can kill and cook it and helping a bat escape from the cabin before Lester can catch and kill it. And finally, Nadine helping Rodney try to shake free from the growing danger now posed by both Otis and Lester.

Readers tend to bestow special importance upon the resolution of the conflicts that the author has been at pains to create, whether ‘the ending’ remains open-textured, pointing toward possible futures, or has been comfortably tied up. In the case of One Simple Thing, where tension is so well-wrought, the falling action may have landed too softly, but this ought not deter anyone from accompanying Rodney on his wild ride.