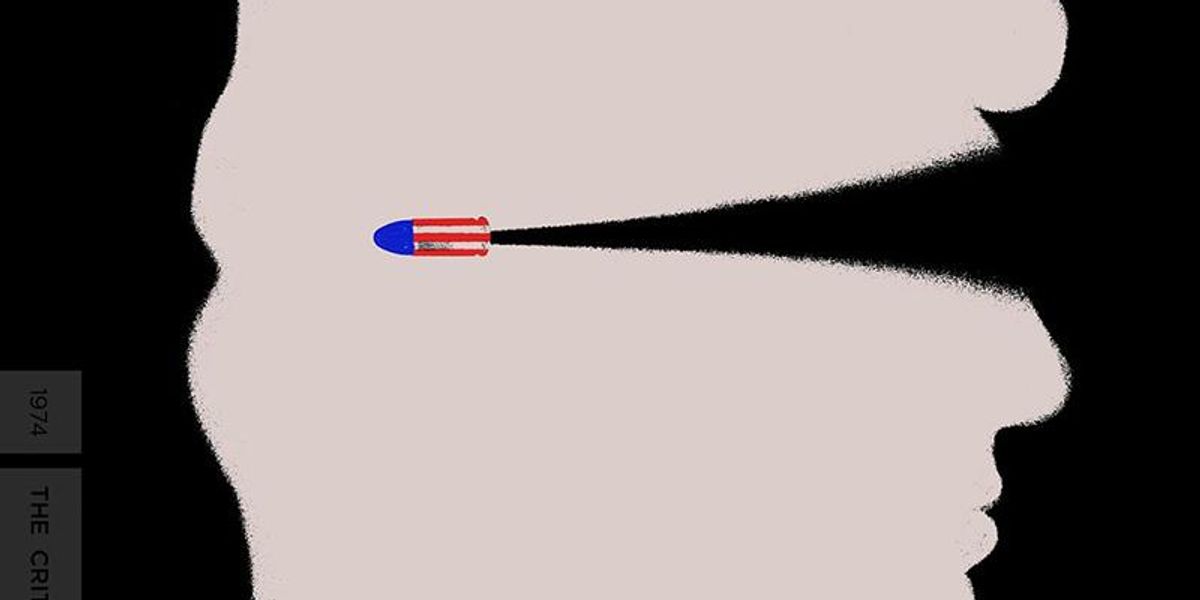 “The committee believes, on the basis of the evidence available to it, that President John F. Kennedy was probably assassinated as a result of a conspiracy. The committee is unable to identify the other gunman or the extent of the conspiracy.” —Report of the Select Committee on Assassinations of the U.S. House of Representatives (1979)

Watching Alan J. Pakula’s The Parallax View in a conspiracy-addled 2021 can produce somewhat of an out-of-body experience. Released in June 1974, one year after the start of the Watergate hearings and just two months before President Nixon’s resignation, it channeled that season of mistrust and disgust without ever directly alluding to it. Ostensibly a thriller about an intrepid newspaper reporter digging into mysterious deaths, the film’s plot is fairly pedestrian.

The screenplay reads like the kind of thing that might play at the drive-in to a half-attentive Friday night crowd. But in execution, the film more closely resembles one of the year’s other cinematic landmarks, Coppola’s The Godfather Part II (1974), whose indictment of American corporate-political criminality was similarly ruthless but still somewhat toothless by comparison.

Bookended by political assassinations blamed on deranged lone gunmen, The Parallax View plugs right into the anomie coursing through the country after the previous decade’s heroes had been cut down one after the other. It starts at a gala bash at the Space Needle, one of many imposing structures that loom over the film’s seemingly powerless characters. A senator whose “independence” is described in breathless terms by a besotted reporter is gunned down, supposedly by a waiter who then falls to his death.

An investigation, represented by a shadow-shrouded Star Chamber of aloof justices, finds nothing further to investigate and encourages the public to move on. Other people who witnessed the shooting start to die, which is when a reporter gets on the trail.

Warren Beatty’s shaggy-coiffed Joe is set up from the start to be a familiar kind of hero whose Bogart idealism is barely concealed by a thin layer of sarcasm. Trying to get past a career-derailing drinking problem and barely tolerated by Bill (Hume Cronyn), his Seattle newspaper editor, Joe flashes that Beatty shrug and smile and seems able to get by with just about anything. He jumps on the story after his TV reporter friend Lee (Paula Prentiss) comes to his room panicking about all the Space Needle witnesses turning up dead only to then die herself of supposedly natural causes.

At this point, The Parallax View‘s screenplay could stand-in for dozens of similarly-plotted films that followed. That familiarity becomes more apparent when Joe goes to a remote town looking into the suspicious death of a judge. It’s a clunky bit of work, among the few misfiring segments in this otherwise clean and well-tooled film, with a chair-smashing bar fight and tire-squealing car chase that feel dropped in from some forgettable bit of ’70s bosh.

But once Joe gets his first hard piece of evidence—a personality questionnaire from the Parallax Corporation’s “Department of Human Engineering”—the narrative bends sinister. Not because the people behind the killings turn out to be highly placed. How many thrillers have turned on the revelation that a single diabolical executive or politician has been bumping people off to cover up their evil plans? But because it isn’t a person or persons who Joe turns out to be infiltrating, but an elaborate network whose bland corporatism is more chilling than if it had turned out to be some ideological cabal of fanatics. The slippery facelessness of the conspiracy is the true nightmare.

To portray the implacable nature of what Joe is up against, Pakula and his cinematographer Gordon Willis—whose clean, dark lines and cool tones are crisply shown off in the Criterion edition’s gorgeous transfer—emphasize bland modernist spaces and frames in which people are cut off from one another by sharp angles and windows. It all emanates with a low hum of dread that lies behind the bright sparkling Americana (parades, rallies) that sets the stage for one killing after another.

That unsettlement draws from other cinematic artifacts of paranoia. A cannily rendered subliminal mind-altering film segment references Kubrick’s A Clockwork Orange (1971) the architectural angularity is akin to Welles’ The Trial, and the conclusion loudly echoes Frankenheimer’s The Manchurian Candidate (1962). The Parallax View‘s atmosphere also informed works to come: Robert Altman, whose overlapping audio style Pakula borrows for several scenes, used the sense of gnawing political chaos for the next year’s Nashville (1975) while Fincher’s The Game (1977) feels like a pop variation on some of the visual themes.

The paranoia lying behind The Parallax View’s cold and depopulated spaces goes deeper than the hunt for a villain. Once Joe, under a false identity, wends his way inside the conspiracy, the men he comes up against are not overt sadists but pure functionaries, speaking the bland certainties of a corporate America that have decided to simply work assassinations into their profit and loss statements. Theirs is a staid, almost nonchalant villainy.

If ideology plays any part in why certain people are being marked for death, it is not disclosed. Many conspiracy theories of the time pointed to a military-industrial complex which they believed was steadily picking off any figure (King, the Kennedys, Hampton) who threatened to upset the status quo.

The Parallax View turns on a foggier and more frightening proposition in which politics don’t seem to matter. The rally ending the film at first embodies an innocence, with a high school band and bleachers full of enthusiastic supporters turning over cards to create images of different presidents (Washington, Lincoln). But the way Pakula shoots the rally, often from high up in the rafters where a thriller calculus involving a sniper rifle keeps things percolating, is so distant that the event feels abstract and mechanical, with the senator at the center of it all just another widget on the assembly line.

Some of the conspiracy theories that tried to explain the air of violent chaos enveloping American life at the time had a sense of idealism at their core, despite the frequent derangement. They had heroes, villains, storylines, and hoped-for denouements. With singular artistry and considerable cynicism, The Parallax View mines those theories’ distrust and replaces it with the chilly blankness that follows not the first shocking public killing but the 20h, after which people have stopped even bothering to ask questions.