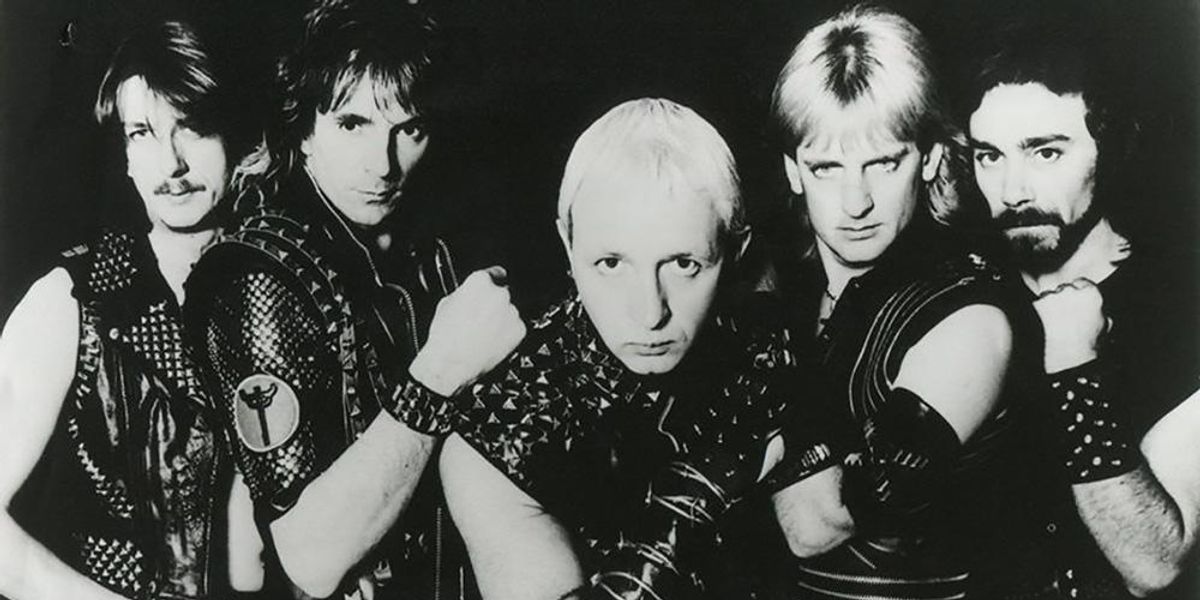 I present to you the 15 best songs by Judas Priest, expanded from the original idea of ten simply because the band’s legacy is too important, the discography too large, and — which may be surprising to neophytes — too eclectic to limit to just ten. All fanboy bias was thrown out the window in favor of objectivity — otherwise “Delivering the Goods” and “Starbreaker” would have been right up there — so I dug up what I consider the band’s most important tracks, whether relating to influence, popularity, longevity, or in several cases, all of the above. If you disagree, feel free to comment, and better yet, chime in with your own personal Priest faves.

Following the lead of Deep Purple’s 1971 song “Fireball”, which at the time featured some of the fastest kick beats heavy metal had heard, “Exciter” cranks up the intensity a hundredfold. Propelled by a throttling double-time beat by drummer Les Binks, double kicks in overdrive, brought unprecedented speed, intensity, and dexterity to the genre. The rhythm riffing by Glenn Tipton and KK Downing is sharp and robust, their twin leads searing, while Rob Halford turns in an astounding vocal performance. The song would profoundly influence the thrash/speed metal wave of the early 1980s, inspiring the Canadian speedsters of Exciter to name their band after it.

A bit of an oddity on an album specifically designed for mainstream success, the churning, martial “Metal Gods” was also one of Priest’s heaviest songs to date. Atop a simple yet wonderfully rigid rhythm section by Ian Hill and Dave Holland, shuffling hi-hat giving it just the slightest sense of groove, the chorus features an effective call-and-response between a detached-sounding Halford and a similarly mechanical-sounding Tipton and Downing. It also features the band at its most creative in the studio, whipping guitar chords, smashing pool cues, and most famously, dropping trays of cutlery to achieve the song’s vivid sound effects.

The most overtly commercial song on the breakthrough British Steel, “Living After Midnight” still sticks in the craws of some fuddy-duddy metal old-timers, but as trite as this little party anthem is, its hook is irresistible and glorious, the sound of a band learning that it never hurts to have a little fun once in a while. Backed superbly by Holland’s sharp, powerful backbeat — his simple style was the reason he was hired to play on this album — the song is all about the hook rather than the riff, emphasized by the fact the song starts off with the chorus. In the tradition of Montrose, AC/DC, and Van Halen, and predating the glam metal explosion of the 1980s, the song is oddly clean-cut, hedonism rendered a little innocent, and kind of sweet. It would become an instant hit, making Judas Priest a household name, and would go on to be one of the band’s most beloved live staples.

Technically it’s not doing anything different than what “Exciter” did six years earlier, but what “Freewheel Burnin'” has over that seminal track is mystique. Tom Allom’s production is incredibly dense, lending an already heavy song an added layer of darkness. The guitar tone is tar thick, yet sleek, Holland’s robotic drumming — a far cry from the unhinged speed of Metallica and Slayer that same year — cold and impersonal, while Halford’s vocals are over the top, screaming, screeching, spitting out lines like bullets. Capped off by the greatest twin solo by Tipton and Downing, it was a defiant, anti-commercial single in 1984, its intensity anticipating “Painkiller” six years later.

The most overtly theatrical track on the groundbreaking Sad Wings of Destiny, it’s no secret Rob Halford wanted to emulate Queen’s A Night at the Opera, which was made at Rockfield Studios in Wales right before Judas Priest went there to record its second album. And indeed, starting with that blood-curdling, fader-fiddling intro the musical depiction of Jack the Ripper is an inspired example of heavy metal at its most theatrical, two minutes and 51 timeless seconds of flamboyance and menace, led by Halford’s shattering vocal performance.

The best song on Defenders of the Faith, “The Sentinel” is also a rare 1980s moment where Judas Priest revisits its progressive heavy metal past, a magnificent five-minute epic whose blend of atmosphere, intensity, and gigantic hooks has made it a fan favorite. Normally a lyricist with a tendency to spew heavy metal clichés without talking about much at all — which always oddly works — Halford is much more focused on this track, painting a vivid dystopian picture reminiscent of John Carpenter’s Escape From New York: “Amidst the upturned burned-out cars / The challengers await / And in their fists clutch iron bars / With which to seal his fate”.

More cynical minds would call this lead single off Point of Entry “Living After Midnight Part Two”, but it’s actually the superior song, rigidity replaced by a much more relaxed groove, its ebullience a clear reflection of the band’s Ibiza surroundings, where the album was written and recorded. Perfectly suited for summertime listening, it’s nothing but fresh air and optimism, driven by a great opening riff, the sound of a band loving life, confident enough to write corny lines like, “I’m gonna do it my way / Take a chance before I fall”, and still sound convincing.

Nobody saw this song coming. Four years after the maligned, synth-adorned pop experiment Turbo and two years after the sloppy and atrocious Ram It Down, the title track for Judas Priest’s 12th outing was completely uncharted territory. Featuring a thunderous intro by new drummer Scott Travis – a colossal improvement over the technically limited Dave Holland – and highlighted by Halford’s maniacal performance, this was Priest embracing extremity without pandering, and sounding once again vital, relevant, and best of all, more powerful than ever.

Although it’s been a part of Priest’s setlists off and on for the past three decades, “Desert Plains” is still a somewhat underrated song, not to mention a real oddity in the band’s album wasn’t just a return to the heavier side of the band’s back catalog. One of the few real successes on an album that tried a little too hard to sound AOR rather than heavy metal, the song is strangely spacious, a comfortable yet driving rhythm section underscoring economical performances by Tipton, Downing, and a surprisingly distant and restrained Halford. It might ultimately be more Blue Öyster Cult than Judas Priest, but it’s a rare moment of subtle beauty from the band.

Always encouraged — to put it mildly — to put a “single” on its albums, Judas Priest was never above covering songs in the 1970s, having tackled material by Joan Baez and Spooky Tooth early on. However, the band’s cover of Peter Green’s Fleetwood Mac composition succeeded in such a way that the Priest version is now far more famous than the original. They make it their own, accelerating the pace just enough to achieve a better balance of force and menace, and the groove created by drummer Les Binks cinches it. It might not have been written for the metal crowd, but Priest’s towering version is nevertheless an all-time heavy metal classic.

Stuck way in the back of side two, “Dissident Aggressor” seems like an afterthought on Judas Priest’s third album, but it remains an absolute marvel to this day, three minutes of staggering heaviness that was years ahead of its time. Opening with a 35-second intro that cranks up the tension more and more before exploding with a flourish of high-pitched screams, the song is a relentless assault of churning riffs, audacious atonal guitar solos, creative drumming by session drummer Simon Phillips, and one of Halford’s greatest performances on record. American speed kings Slayer, which were profoundly influenced by Judas Priest and especially “Dissident Aggressor”, would famously cover the song a decade later.

Before Metallica’s “Fade to Black”, before the rage and self-loathing that permeated heavy metal in the 1990s, there was “Beyond the Realms of Death”, which set the template for the Miserable Teen Heavy Metal Song. Simply arranged — acoustic verses, colossal, explosive choruses — Halford’s lyrics take two different points of view, first in the third person, depicting a depressed young man (“No matter how they tried / They couldn’t understand”) then shifting to the first person, who vents his frustrations before taking his own life (“Keep the world with all its sin / It’s not fit for livin’ in”). Powerful and harrowing, the song’s use of dynamics is masterful.

Written in a matter of minutes and only 156 seconds long, “Breaking the Law” opens with one of the most famous riffs in metal history, wasting no time getting into listeners’ heads. Halford’s lyrics were originally interpreted to be about teen alienation and rebellion, but today you can’t help but hear his own pain regarding his repressed homosexuality as he bellows, “You don’t know what it’s like!” With its simple, sing-along chorus, and featuring an introduction that’s become as much a part of the song as the actual music (“Breaking the what?”), it’s a permanent fixture in the Judas Priest setlist to this day. If you’re at a Judas Priest concert, watch the crowd erupt when this song kicks into gear.

Six years after “Black Sabbath” unofficially spawned an entire musical genre, Judas Priest ignited a second sea change with a curious composition that managed to rewrite the rules of the nascent heavy metal sound. A combination of two songs, “Whiskey Woman” by former singer Al Atkins and Halford’s own composition “Red Light Lady”, the titanic “Victim of Changes” features a searing dual guitar attack that takes the approach of Wishbone Ash and the Allman Brothers to an entirely new extreme, and most vitally, introduces a level of operatic vocal flamboyance courtesy Halford that the genre had never seen before. The second he screams the climactic, “Victim of changes!” the door’s blown wide open, the possibilities now even wider than ever. Heavy metal would never be the same again.

For a band renowned for vague, sometimes cartoonish lyrics, Judas Priest knocked one clear out of the park in 1982 with the startlingly mature opening song on Screaming For Vengeance. Introduced by the grandiose overture “The Hellion”, “Electric Eye” opens like a house on fire thanks to nimble guitar work by Tipton and Downing, creating a powerful, majestic backdrop against which Halford performs his prescient lyrics about electronic surveillance, part HAL-2000, part 1984: “I take a pride in probing all your secret moves / My tearless retina takes pictures that can prove”. Foreboding, bracing, and imposing, and featuring some welcome raw production by Tom Allom, it’s a perfect encapsulation of heavy metal’s appeal, and is Judas Priest’s definitive moment.