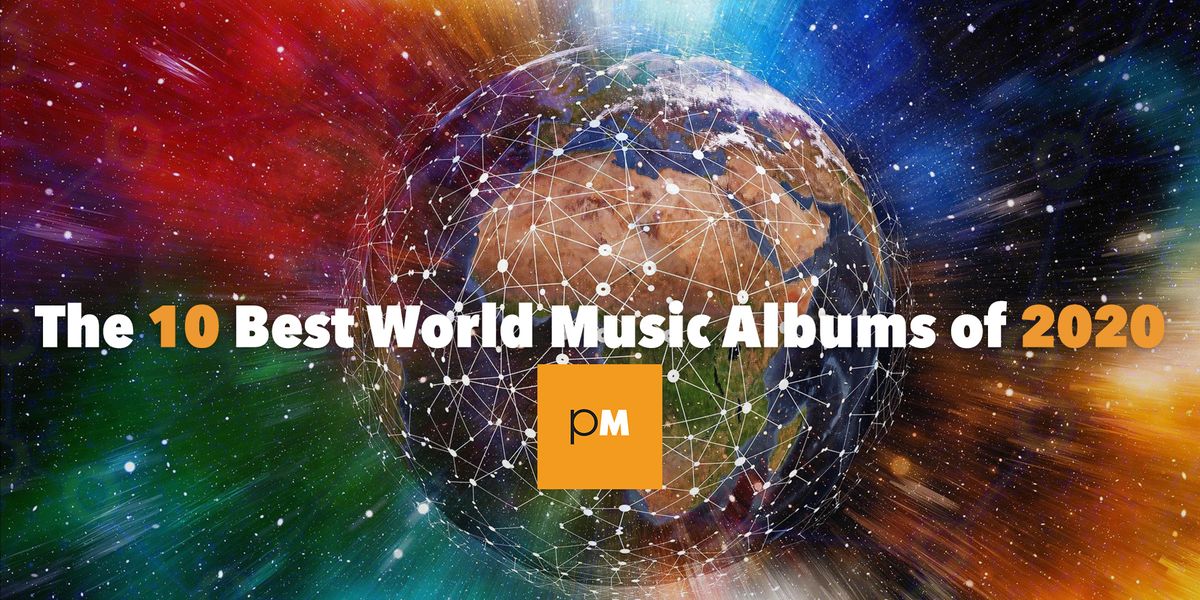 In Haiti,
mizik rasin, or roots music, serves important roles in many culturally engaged movements. It has the capacity to tie together past, present, and future in often spiritually-inflected sonics through inextricably connected music and dance. On album Vodou Alé, Gonaïves-based ensemble Chouk Bwa adds a particularly forward-facing dimension to the style by partnering with the Brussels-based Ångströmers, who enhance the natural resonance of Chouk Bwa’s vocals and percussion with careful electronics. Already complex rhythms thus generate even more intricate textures; the Ångströmers are cautious never to overpower the call-and-response segments that makes Chouk Bwa’s music so dynamic.

Instead, Chouk Bwa, fronted by singer Sambaton Dorvil, leads the way, and the Ångströmers’ adornments swell, a foundation that raises them higher. Vodou Alé is literally charged by layers upon layers of positive feedback loops, energy constantly and exponentially building in ways that mimic live performance on the one hand and create a completely different experience on the others. This is a collaboration that surrounds its home listening audience with plugged-in polyrhythms, and does so without compromising performance or production.

The melancholy Portuguese song form of fado is one that rarely deviates from a straightforward acoustic profile of guitars and voice, the portability of which makes the genre a staple of pubs and cafés. But few musics can truly be said to stay the same forever, and
Lina_Raül Refree, a collaboration between Portuguese singer Lina (formerly known as Carolina) and Spanish producer Raül Refree (a solo artist as well as collaborator with artists like Rosalía and Lee Ranaldo), gives fado a well-calculated twist by replacing strings with keys.

Together, the pair captures the moodiness that is indisputably key to the style and amplifies it with perfectly restrained synths and vocal reverb. The execution is nothing less than revelatory. This is the spirit of fado given sonic relevance and eerily heightened dramatic effect for an electronic era, the best of change and continuity all at once. Respect is given to the old and life to the new as Lina_Raül Refree shows how even the smallest ripple can make incredibly moving waves.

A well-regarded classical guitarist since her youth, Xuefei Yang tries her skillful hand at interpreting sounds of her home country on
Sketches of China, an album that features arrangements of folk songs from as far back as the Han Dynasty alongside much newer pieces. She features composers like Tan Dun, whose “Seven Desires for Guitar” provides a more modern and challenging counterpoint to more delicate and timelessly lovely pieces like Yang’s own arrangements of “Flower Drum” and “Silver clouds Chasing the Moon”. She also performs Weiliang Zhang’s arrangement of “Hujia”. Those are only a few of the many blissfully beautiful tracks found on this double album.

On “A Lovely Rose”, she serves as featured soloist alongside a lush orchestra of symphonic strings and winds. More often, she is accompanied minimally or not at all, and a given piece instead relies – rightly – on the nimbleness of her fingers and her skill for conveying poignant emotion. Strikingly versatile, Yang and her guitar take on style after style on
Sketches of China, each crystalline moment capturing another facet of musical heritage and history, allows Yang to show the range of her instrument and expand her already considerable repertoire.

The geographical region of Thrace has a history of being at the center fruitful folk music revivals. Many of the state-sponsored Bulgarian choirs instrumental in 1980s and 1990s worldbeat movements drew on its ancient repertoires, and its location across Greece, Bulgaria, and Turkey speaks to its importance in regional cultural flows. Like many before them, Evritiki Zygia finds inspiration in old Thracian traditions, which the Greek quintet transforms with vigor into Moog-powered swirls of hypnotic psychedelia.

On Ormenion, the group hits particularly transcendent highs via the mix of traditional instruments (lyre, bagpipe, kaval, davul) and the newer addition of various synths. Even the gentlest opening inevitably leads to a frenzy on each of the album’s seven tracks, a breathtaking testament to the explosive chemistry the group has developed over nearly a decade and a half performing as a group. This is a tidal wave of mountain folk music from musicians both dedicated to their roots and to progress. The two drives come together in perfect metaphorical and literal harmony at a fever pitch on ecstatic Ormenion.

6. Various Artists – A Guide to the Birdsong of Mexico, Central America, and the Caribbean (Shika Shika)

The second album in an ecologically-conscious series, Shika Shika’s latest
Guide asks artists from Mexico, Central America, and the Caribbean to work with field recordings of endangered birds local to their home areas in creating avian-inspired music with the intent of raising awareness and funds for local conservationist organizations. A wide range of artists and animals yields a wide range of sound across ten tracks, each a dreamy and deliberate blend of the organic and the electronic.

Belize’s Garifuna Collective contribute an upbeat composition that revolves around paranda guitars and the black catbird’s rhythmic call. Costa Rican producer Mȁ̲̠̻ͥ̾ra͔̥̩̾͊̑cuyá͊ takes a subtler approach to interweaving the call of the cuco picogordo de La Española with the haunting voice of singer Ximena Obregón and a backdrop of atmospheric ephemera. Veteran Nicaraguan folktronica producer Tamara Montenegro brings local strings in dialogue with the momoto carenado, while Cuba’s DJ Jigüe sharpens the chirp of the ferminia to cybernetic perfection.

These are thoughtful, musical interpretations of some of the world’s most vulnerable species, collaboration on a scale that situates human beings within nature in gloriously sensorial ways.

In the Akan language, Onipa means “human,” an identity the London-based duo of the same name doubly nominally embraces with Afrofuturist debut album We No Be Machine. Led by K.O.G. frontman Kwaku of Ghana and Nubiyan Twist producer Tom Excell, Onipa features guests from across Africa and beyond: singer-songwriter Wiyaala and master percussionist Afla Sackey from Ghana, singer and rapper Spoek Mathambo from South Africa, electro-folk artist Morena Leraba from Lesotho, and many others contribute to these electrified expressions of humanity. Every new guest adds another bright color to the vibrant and well-produced Onipa spectrum, which spans an entire continent’s worth of styles and then some.

Tracks of tropical highlife and dancehall sit side-by-side with makossa and evocations of Congotronics, while sweet vocal harmonies and anti-establishment hip-hop alike uplift messages of community and humanity. We No Be Machine is constantly exuberant, full of cuts that work just as well as standalone singles as they do as a constantly shifting whole. Purposeful and well-produced beats make for a brilliant vision of life in the virtually-inflected age, one in which there is still plenty of room to dance.

São Paulo singer-songwriter Céu’s fifth studio album (and now the winner of this year’s Latin Grammy for Best Portuguese Language Contemporary Pop Album) is minimalist in structure and maximalist in impact. Blissful deconstructions of dance music continue the artist’s recent forays into heavy electronics while also keeping the focus where it belongs: on the musicianship amplified by the bonds between band members, all of whom worked together on previous Céu album
Tropix. Other stars join in, too; Seu Jorge’s deep voice floats through the background of “Pardo”, a track written for Céu by Tropicália pioneer Caetano Veloso.

Céu, though, is a charismatic center in her own right, her voice by turns soothing, melancholy, and energized as an atmosphere of strings, keys, and percussion fluctuates around it in a dance of heavy synthesized fuzz and delicate acoustics. Classic rock sounds, 1980s darkwave, and hints of samba all speak to the variety in Céu’s adventurous musical worldview, even in her most stripped-down work to date, and point to the promise of infinite potential directions for her to take. Whatever happens next, though, APKÁ! is as compelling and cosmic a pop album as there is, a sophisticated gem in Céu’s already bejeweled catalog.

The nation of Djibouti lies at the crossroads of both land and sea. Situated at the intersection of Eritrea, Ethiopia, and Somalia on the Horn of Africa, its coastline borders the Bab-el-Mandeb strait, where the Red Sea meets the Gulf of Aden. For millennia considered a geographic site of strategic military and economic importance, its government’s tight control over media of all kinds has nonetheless hidden Djiboutian culture from much of the outside world. In fact,
The Dancing Devils of Djibouti, commissioned by Ostinato Records, is the first Djiboutian album recorded for an extranational audience, and it makes for a phenomenal sonic exploration of Djibouti’s literal place in the world.

Groupe RTD, the longtime house band for state-run media outlet Radiodiffusion-Télévision Djibouti and nothing short of a local supergroup, plays a cosmopolitan blend of East Africa, the Arab world, ports along the Indian Ocean, and beyond. Somali dance music, Red Sea funk, Ethiojazz, and dub and reggae all flow through the ten tracks of this whirlwind album (the Djiboutian government allowed Ostinato personnel three days in total for all local aspects of the recording and production), ultimately resulting in an exceptionally versatile mix of styles.
The Dancing Devils of Djibouti marks a historic first – but more than that, it’s simply phenomenal music.

Among the many visionaries we lost this year was the inimitable Tony Allen, co-founder of Afrobeat with Fela Kuti and constant innovator in any number of styles. In any given year, it’s a standard pleasure to hear his signature polyrhythms show up on at least three or four other artists’ albums; to hear him release the occasional solo album is even more special. I can think of nothing more poignant, though, than Rejoice!, a collaboration between Allen and the equally legendary Hugh Masekela, known as much for his anti-apartheid activism as for his smooth, splendid jazz trumpet.

Recorded largely in 2010, when Allen’s and Masekela’s touring schedules serendipitously overlapped in the presence of World Circuit’s Nick Gold and supplemented by further recording sessions after Masekela’s death in 2018, it easily lives up to its name in stoking fires of joy. Allen and Masekela were and always will be musical masters, deserving icons who made golden music well into their late 70s and, thankfully, once found time to do so together. Fresh and nimble, the sizzling jazz of Rejoice! celebrates – and commemorates – two artists with a combined century of professional performance between them, and serves as a reminder of how fortunate we were that their paths crossed in a way we all have the chance to experience.

It was an initial collaboration between the Johannesburg-based community media project Keleketla! Library and British non-profit In Place of War that brought a team of local South African musicians together with London-based electronic duo Coldcut. From there, the project grew from dialogue to an exponentially larger conversation, with contributions from, among many others, artists and groups like Tony Allen, Shabaka Hutchings, Antibalas, the Lani Singers, the Watts Prophets, and Afla Sackey backing such local luminaries as Yugen Blakrok, Sibusile Xaba, the Soundz of the South Collective, and personnel and affiliates of rapidly growing label Mushroom Hour Half Hour.

After one of the most dynamic starts to an album this reviewer has ever heard – “Future Toyi-Toyi” introduces the titular stomp-based anti-apartheid protest dance form with Tony Allen’s eternally recognizable signature polyrhythms and only gets stronger from there – the album goes in a number of different and utterly revolutionary directions. Jazzy funk, ecstatic electronics, and sharp hip-hop all do different work in underscoring messages encouraging personal growth and societal overhauls around the world through a plurality of different musical voices.

The phrase
keleketla comes from a response in the Sepedi language to a storyteller’s opening words, and Keleketla! follows suit, responding to present-day struggles with candor and craft.