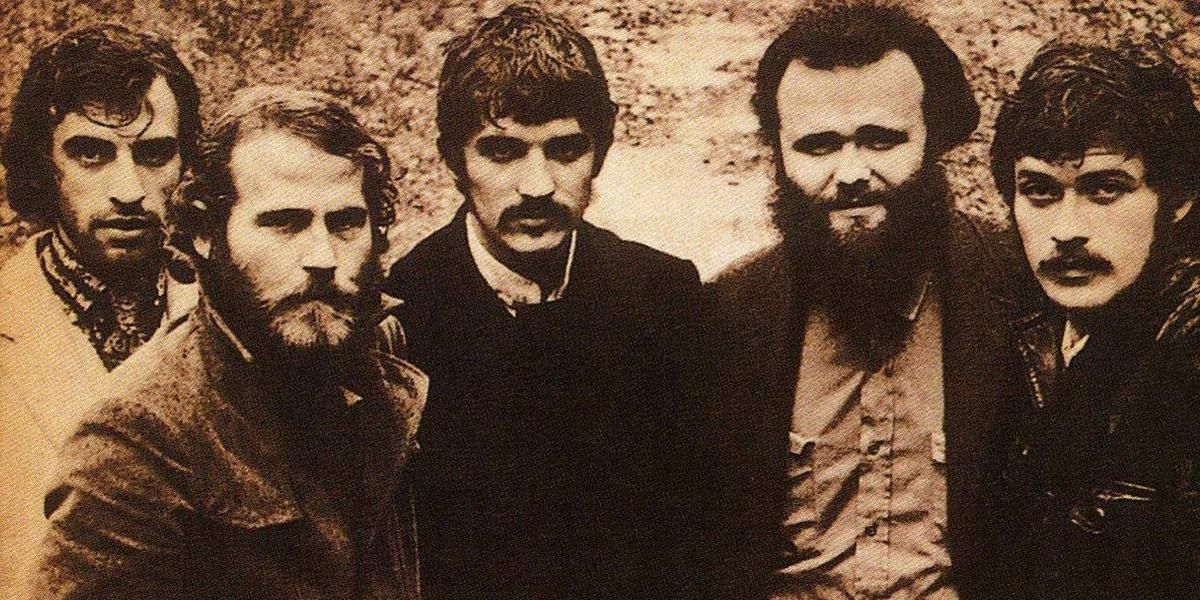 An anthem for the working class, this song tells the woebegone tale of a poor country farmer, desolate over the loss of his crops and seeking refuge from a fast-talking “Union” man, offering hopes for redemption: “And he comes a man with a paper and pen / Tellin’ us our hard times are about to end.” The song brilliantly showcases the tremendous interplay between the musicians while also demonstrating the various vocal ranges present as Manuel anchors the upper register of the verses while Danko and Helm balance things out with low-end harmonizing on the chorus.

A true homage to the Band’s roadhouse beginnings that took place under the tutelage of Ronnie Hawkins, this song slinks along anchored by Helm’s strong backbeat and Manuel’s flourishing piano notes. Close your eyes and you can picture them in a smoky club somewhere on a nondescript weeknight bringing the rock show to those brave souls willing to step out and seek it out. “Look out Cleveland / Storm is coming through / And it’s running right up on you / Look out Houston / They’ll be thunder on the hill / Bye bye baby don’t you lay so still.”

The title track to the Band’s third album, this song stands as a staple track on all of the group’s anthologies. In interviews, Helm debunked the common perception that this song served as Robertson’s attempts at expressing his own fears of the stage. Whatever motives lied behind the writing though, the song has an undeniable musicality, with all five members pounding away at their instruments like there’s no tomorrow, offering up years of hard-worn live practice as evidence of their abilities and focus. It’s a song that demands multiple repeats while listening to the album.

Another standout from the Stage Fright album, this song on the surface seems quite simple. But like with most Band tracks, it contains lots of hidden imagery and ambiguous questions. Is it about the daily demons that were being constantly battled by the tune’s mercurial singer Richard Manuel? Is it a fight for survival or an angry and defiant declaration from the depths of a personal hell? The lyrics also allude to the desperation of the times, when assassinations, riots, and civil unrest became prevalent and America moved forward in its journey for civil rights and personal freedoms: “Save your neck or save your brother / Looks like it’s one or the other / Oh, you don’t know the shape I’m in.” The times were chaotic and an “every man for himself” mentality became a popular mantra.

Band scholar Barney Hoskyns calls Helm’s lead vocal here a “redneck-wildcat yelp”, and that description aptly proves why no one else in the Band could do this song justice. Based on a real Yazoo Street in Helm’s homeland of Arkansas, lyricist Robertson throws everything at the wall: Biblical allusions, colloquial charms, and hints of sexual shenanigans. Appearing both on Dylan’s The Basement Tapes and the Band’s debut LP Music From Big Pink, the song is one of those more obscure Band gems that sneaks up on you but leaves a lasting impression.

Written by Dylan, and performed by him, the Grateful Dead, and countless others, the song is best delivered by Helm on the Band’s 1971 album, Cahoots. Again, the track is filled with randomly juxtaposed images: the narrator’s encounters with lions inside the Coliseum lead to a bumpy plane ride to Brussels where everyone wildly greets him when he steps inside. I always imagined the song to be about Dylan’s madcap tours of Europe, where the ruthless schedule and generous use of amphetamines led him into an altered state of mind for much of his time abroad. Helm’s rendering gives the narrator an average Joe quality; it’s easy to picture a “fish out of water” traveling the world and gaining fame all for the first time.

One of the most historically resonant songs in the Band’s canon, this remarkable epic accurately and honestly offers a viewpoint of the American Civil War through the eyes of Virgil Caine, a Tennessee farmer who honorably “served on the Danville train”. Originally conceived and written by the Canadian Robertson, the song was fact-checked by Helm, who famously accompanied Robertson to an American library to perform research and ensure that the South would be given its due reverence. Rather than veering into battle cry territory like other songs with a pro-South slant, this song instead graciously documents the struggles and heartaches of a man losing his place in a rapidly changing world. Like most of the Band’s work, the common man is given a voice that speaks to a larger generation.

“We carried you / In our arms / On Independence Day,” wails Richard Manuel over the opening notes of this Music From Big Pink gem. A collaborative effort between Manuel and Dylan that was originally recorded for The Basement Tapes with Dylan on lead vocals, the song universally stands as one of the best in the Band catalog, a plaintive rumination on the vagaries of human existence. Critics have a field day with this one. Andy Gill associates it with King Lear and the rising anti-Vietnam sentiments of the time. Sid Griffin concentrates on the song’s Biblical imagery, while Greil Marcus calls it an elegy. Levon Helm simply focuses on Manuel’s vocals: “Richard sang one of the best performances of his life.”

One of two songs that the casual fan will probably recognize from the Band, “Up on Cripple Creek” tells the story of a good-natured drunk who travels to Lake Charles, Louisiana to take up with the long-suffering Bessie: “a drunkard’s dream if I ever did see one.” There, the rent is free and the living is easy. The narrator can carouse, gamble, and raise hell without recourse. The song’s sing-along chorus, Helm’s genial vocal delivery, and the featured yodeling make the song an anthem for the good times. Absent of any maudlin sentimentality, “Up on Cripple Creek” serves as a soundtrack to everything from a breezy summer barbecue to a drive through the country with the windows down. And if the song needed to be any cooler, it also features Garth Hudson and Clavinet, a novelty at the time.

The other most recognizable song from the Band is a classic that needs little introduction. A weary traveler pulls into Nazareth “feelin’ about half past dead”. While searching for lodging, he encounters “Carmen and Devil walkin’ side by side”, “young Anna Lee”, and “Crazy Chester” who all mysteriously appear, offering various cryptic messages to the wandering narrator. The song offers up striking visuals of frontier towns, mythical beings, and spirited haunts. Like most of the Band’s work, it’s also full of odes to religious imagery and open to eons of interpretation. It also has a killer, vocally blended chorus: “And (and and), you put the load right on me (you put the load right on me).” This song has been making the rounds in concert tributes to Levon over the past week too, as its music perfectly serves as a final farewell to a true legend of a musician. Levon, you will forever be missed.