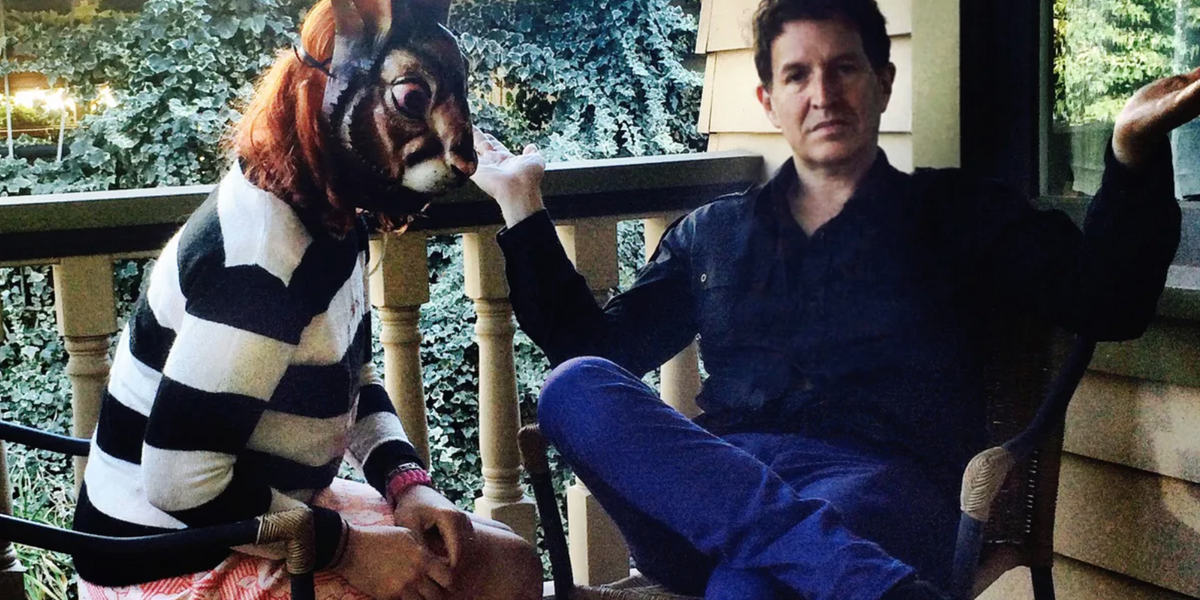 Steve Wynn has the patience of a saint.

When he formed the Dream Syndicate in 1981, he was up against it, as all the hip critics were falling over themselves to tell the world how little they cared about guitar-based bands. Rather than trade in his Stratocaster for a synthesizer, he just carried on making the loud, uninhibited noise that his band became famous for, and guess what? Eventually, the critics all came around to his way of thinking.

Through the “unplugged” craze, grunge, trip-hop, and the demise and subsequent resurgence of the Dream Syndicate, Wynn has clung on to that instrument like a parachute, making inventive and exciting records that always remained guitar-centric. If you like the sound of that and have got a lot of time on your hands, Wynn has just released Decade, an 11-CD box set of the solo work he did between 2005-2015. It comprises expanded versions of seven records he made between those years and a stack of demos, unreleased material, and rarities.

This year sees Wynn trying to promote that collection and the latest Dream Syndicate album, The Universe Inside, released earlier this year. He’s hampered slightly by the fact that there’s a huge, COVID-19 shaped cloud hanging over the world. Unperturbed, he was happy to chat with PopMatters about Bob Mould, Lana Del Rey, and why, given a chance, you should marry a drummer.

Decade chronicles an incredibly prolific, ten-year period following your move to New York City. Was that provoked by the change of location, or something else?

Moving from Los Angeles to New York City in 1994 had a lot to do with it. I’d wanted to live here since the first time I showed up at Port Authority at 4:00am on a Greyhound bus during a cross-country trip I took on my own back in 1981. I spent three weeks living in a YMCA on 34th Street, seeing shows every night, walking miles and miles by day, and thinking, “Man, I want to live here someday.” It took me 13 years, but once it happened, I guess the excitement bled into my writing and my music as well.

The last two Dream Syndicate albums of the 1980s, Out of the Grey and Ghost Stories, appear to have been made under pretty turbulent circumstances; your record company folding, overbearing producers, etc. Did that influence your decision to go solo?

Not so much. I’ve never done much of anything because of the music business or public reaction. But it was just time. At that point, my entire adult life — and my whole life as a recording and touring musician — had been spent as a member of the Dream Syndicate. And that wasn’t a bad thing in any way, but I was ready to start playing with other people and making different kinds of music. That’s another influence on the period that’s on the Decade box. In the first handful of years and records after the Dream Syndicate, I consciously avoided doing anything that sounded like what I had done before. By the time I went into the studio with Come to make Melting in the Dark, and largely because of their influence as well, I was ready to return to the sound of guitars, bass, and drums just letting loose and thrashing it out.

For the first three post Dream Syndicate albums, were you still in a state of transition and finding your feet?

Yes, I guess I was testing the limits and parameters of what I could do. But really, with every record I’ve ever done, I’ve just been responding to whatever was exciting me at the moment. I remember when I was writing and planning for Kerosene Man, I was particularly taken in by Bob Mould’s Workbook album and how he had transitioned from being in a band like Hüsker Dü to being a solo artist. There were plenty of other influences, of course, but I do remember that standing out. But it’s still the case. I listen to a lot of music, and something triggers my interest, and, consciously or not, it ends up having an impact on what I do next.

Freed from the “constraints” of a band, was the temptation to hire in masses of musicians and spend loads of record company money?

Ha! I haven’t always had that option, that’s for sure! But it’s true. I was fortunate enough when I made my first two solo albums for Rhino to have a good budget to work in really top-notch studios, hire fancy studio musicians and producers and spend a couple of months on the record. It was fun, and I made sure to take advantage of the opportunity. I never worked with that kind of budget again, which probably led to the immediacy of the music on the box set. I had to work within my limitations, which has always worked well for me. I mean, we essentially recorded The Days of Wine and Roses in one midnight-to-8:00am session, and that one has stood up over time.

Were you buoyed by the renewed interest in the return to the guitar-based music of the early 1990s?

Definitely, my manager at the time thought it was perverse to release a record like Fluorescent, my folkiest album, at a time when bands like Nirvana and Sonic Youth were having success with the kind of music I was making a decade earlier. But I was enthralled with Come’s Eleven Eleven album, and they somehow felt especially analogous to what I had done before, and I guess working with them reminded me of what I could do or, some people might say, what I should be doing. It felt pretty natural. And then I just kept doing various versions of it, more or less, for the next ten years.

You’re competent on a number of instruments. Ever considered a Todd Rundgren “I play everything” approach?

You do hear that approach on all of the demos on Decade. My demos usually start with whatever drum machine or loop I’m into at the moment, and then I get pretty whimsical and start stacking on things that make me happy. Chris Brokaw has said that he likes my demos often more than the versions I ultimately release. So, you never know. It might be fun. On the other hand, unlike Todd Rundgren or Paul McCartney, I’m a horrible drummer. I can keep an AC/DC beat for about two minutes, and then my right ankle starts killing me. Luckily, I’m married to one of the best drummers on the planet.

Melting in the Dark has the feel of primetime Dream Syndicate. Was that intentional or due to the fact you were recording with Come?

Well, I know that they were all pretty big fans of The Days of Wine and Roses. So, while I was writing songs for that album with them in mind, they were probably tailoring their parts and approach with my first album in mind, so I guess it makes sense there would be some similarity. It was an excellent example of a 50/50 collaboration.

When you put the Miracle 3 together, was it because you missed the full-time band dynamic?

I never actually lost the full-time band dynamic when I was on tour. Even when I toured for the more studio-influence first solo records, I still went out and did my best to disappear into the band as just part of the gang. The idea of the Miracle 3 was to have a name on the marquee that would make it clear to people that they’d be seeing an actual band rather than James Taylor sitting on a stool and strumming an acoustic guitar. And the idea was that we’d change the band name for each record that followed — Miracle 3 was just a play on the Here Come the Miracles album that we were touring behind at the time. But it was a good name — and a great band, of course — so it kind of stuck.

Decade is pretty comprehensive — is there anything left in the archive?

There’s a lot of stuff we didn’t use. Pat Thomas, who co-produced and sold the box concept to Real Gone Music, and I listened to about 50 hours of tapes and chose what we thought was the best material. I don’t think the rest will ever come out, but you never know. I wouldn’t have imagined most of this coming out when I was scratching out ideas at 3:00am in my bedroom, but I’m glad it did.

Any plans to reissue the rest of the solo catalog?

One that I’d love to see reissued is Crossing Dragon Bridge. It’s one of my favorite records I’ve made, and it’s one of those “neither fish nor foul” records that not quite like anything else I’ve done. And it’s been out of print for a while. Everything else has come and gone at various times. I will say that one nice thing about this box set coming out now is that CDs, in my opinion, have finally gotten to the point where they sound just as good in their own way as LPs. That wasn’t the case when I did my first few solo albums. CDs sounded awful when they first came out. So, maybe the two first solo albums are worth revisiting as well at some point.

A few bands have covered your material — Concrete Blonde “When You Smile”, Black Crowes “Burn” — do you ever wish a particular band had covered a song of yours? And what song?

There have been plenty of others as well. I think Yo La Tengo has performed nearly every song on The Days of Wine and Roses at this point. They’re a great band. I dig when people cover my songs, and I usually learn something about the song that I didn’t know before. I’d be thrilled to have someone like Jennifer Warnes do what she did with Leonard Cohen’s material or what Bettye LaVette or others have done with Dylan. Let’s see, how about Lana Del Rey? That would be pretty cool. I’ll go with that.

Is it frustrating to have released both Decade and The Universe Inside at a time when you can’t tour to promote either?

Yes, of course. I’m lucky that I was so busy in 2019. I toured all year with the Dream Syndicate, the Baseball Project, and solo as well and I also worked on both of the records you mentioned as well as the collaboration the Dream Syndicate did with Psychic Temple as well as a solo acoustic record I made in Austin with Brian Beattie, who does all the Bill Callahan records. I didn’t know that the memories from the road and the results of the studio work would have to sustain me for the next year or so, but I’m glad that they have.

I’m looking forward to getting back on the road. It’s what I’ve done since I was 21 and I still really enjoy it. There’s nothing like living the music in real-time and responding to everything and everyone around you in the moment.