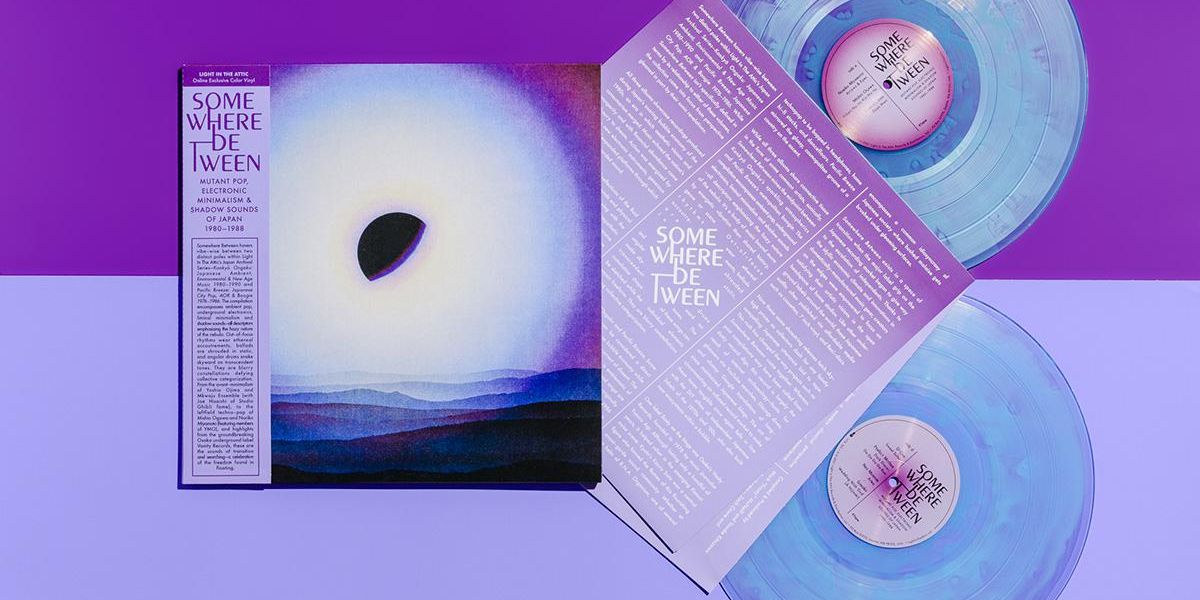 Over the last couple of years, Light in the Attic – a reissue label responsible for lavishly reviving the catalogs of artists as disparate as Lee Hazelwood, the Last Poets, Sixto Rodriguez, and Nancy Sinatra – have been shining a particularly bright light on the music of Japan from the 1970s and 1980s. The compilations Pacific Breeze and Pacific Breeze 2 brought much-needed attention to the Japanese City Pop genre, while the Grammy-winning Kankyo Ongaku focused on the country’s ambient music boom of the ’80s. The latest entry in the series is a bit harder to define.

While the Pacific Breeze sets celebrated the effortless funk and dancefloor beat soundtrack that came with Japan’s prosperous tech boom and Kankyo Ongaku‘s ambient vibe mirrored the austere architecture of the period, Somewhere Between: Mutant Pop, Electronic Minimalism & Shadow Sounds of Japan 1980–1988 fills in the gaps in between. Encompassing ambient pop, underground electronics, liminal minimalism, and shadow sounds, Somewhere Between embraces the gleaming aesthetic of the decade, complete with bright keyboards, booming percussion, and a healthy dose of experimentalism. Compiled by Mark “Frosty” McNeill (co-founder of the dublab internet radio station) and Yosuke Kitazawa, this particular set covers an impressive amount of sonic territory.

Somewhere Between opens with the shimmering techno-pop of Noriko Miyamoto’s “Arrows & Eyes”, as complex synth lines and syncopated effects dance around sweet vocal melodies and Gainsbourg-like spoken word. The stuttering urgency of Mishio Ogawa’s “Hikari No Ito Kin No Ito” straddles a line between soaring pop and jittery post-punk. But it doesn’t take long for the compilation to dive into moodier instrumental set pieces, like Yoshio Ojima’s “Days Man”, a propulsive slice of new wave funk that wouldn’t sound out of place on the score of an ’80s film noir soundtrack.

While an economic boom might suggest the everyday sounds of pure pop music, Japan’s prosperity actually gave underground musicians the financial means to create art on their own terms. Plenty of more traditional pop was still being churned out on the major labels. But indie labels like Vanity and Balcony (among others) thrived, and plenty of self–released artists were able to ply their trade without making concessions to record company management.

Somewhere Between provides a fascinated glimpse into the world of artists like R.N.A.-ORGANISM, whose “WEIMAR 22” is an arresting bit of industrial minimalism, complete with thudding percussion and spooky, effects-drenched vocals. Perfect Mother’s “Dark Disco-Da Da Da Da Run” is cut from the same cloth, another oddball bed of swirling, underground electronics with disembodied quasi-chanting. Sometimes the music takes refreshingly unexpected turns. “Akatere” by Wha Ha Ha is a deliciously unmoored bit of atonal weirdness that transforms suddenly into a catchy, angular reggae treat.

Somewhere Between often splits the difference between unhinged indie experiments and sunny pop confections. Takami Hasegawa’s “Koneko To Watashi” is a deeply satisfying plunge into tropical funk. The lush, ethereal beauty of “Yakan Hikou” by self-released artist Naoki Asai sounds like a soaring power ballad filtered through underground production aesthetics. In fact, what makes Somewhere Between stand apart from Light in the Attic’s other recent “Japan Archival Releases” is that it doesn’t get bogged down in a particular style. It’s not a pop/funk hybrid. It’s not minimalism. It’s a combination of many different styles from a country that was enjoying national prosperity and using all the tools at their disposal to make unique artistic statements. As a result, it’s one of Light in the Attic’s best compilations in awhile – and that’s really saying something.